Unknown fighter jets tried to attack the Russian air base in Syria
Read: 946 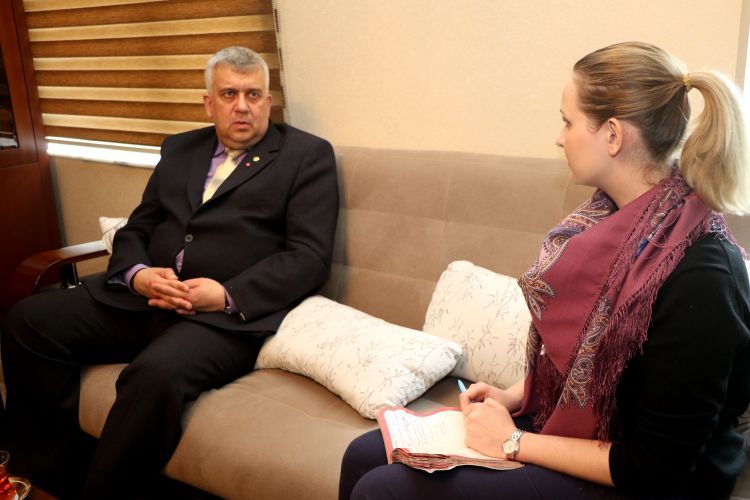 “OSCE/ODIHR report on the result of the presidential election in Azerbaijan is revenge, as they lost their power to influence internal political affairs of the country,” Russian political analyst and historian Oleg Kuznetsov told Eurasia Diary within the framework of his visit to the International Eurasia Press Fund (IEPF).
Eurasia Diary: How do you assess the election process and the election campaign in Azerbaijan?
Oleg Kuznetsov: The April 11 presidential election in Azerbaijan and the presidential election in Russia held on March 18 are very similar to each other in terms of form and content. In Russia - this is the incumbent president positioning himself as a nationwide leader. The situation in Azerbaijan is the same. Candidates of unpopular parties during the pre-election race simply created a certain background. Accordingly, the results were predictable.
There are prerequisites for such results. In both countries the state sectors, the state corporations are dominant in the economy. Naturally, they support the current government. Their share in the state budget is almost 75-80 percent per year. In other words, neither Russia nor Azerbaijan has financial groups that could finance the oppositions.
On the other hand, there is no request for opposition in the society and there are no sources of funding, there is simply no one to create a real intellectual alternative. Nobody can offer an alternative model of the country's development, except current one.
Eurasia Diary: Some believe that Putin's strong victory in the elections is due to his foreign policy in Syria and Ukraine. What is your opinion about this?
Oleg Kuznetsov: The situation in Russia is not as unambiguous as it seems at first sight. Putin was supported by two categories of voters: young people under 35 and pensioners over 60. Others, including myself, do not support him. But I perfectly understand that three-fourths of citizens voted for the incumbent president. I must accept this choice.
In Azerbaijan there was another motivation for high turnout and this factor is Nagorno-Karabakh conflict which unites whole nation. The people were rallying around their leader. As an observer, I saw how people of all age categories came to polling stations. This is the difference from Russia.
Eurasia Diary: What do you think about the OSCE / ODIHR critical report on the presidential elections in Azerbaijan?
Oleg Kuznetsov: We all know perfectly under what circumstances the OSCE mission was closed in Azerbaijan. The OSCE is often a political umbrella for NATO's aggressive actions. Naturally, the actions carried out by the OSCE mission in Azerbaijan contradicted the status of the organization.
It is quite understandable this report was revenge, as they lost power to influence internal political affairs of Azerbaijan.
Eurasia Diary: What is your thought on the re-election of incumbent government in Russia and Azerbaijan?
Oleg Kuznetsov: A large number of people support current government. In the West, it is said that the citizens of Russia and Azerbaijan are peoples with Arab psychology who elect a dictator. That's how they started talking about the Turks, when Erdogan started constitutional reform and quite rigidly expelled the Gulenists and pro-American elements from the domestic policy of their country.
The mentality of the citizens of Russia, Turkey and Azerbaijan is different from the mentality of Europeans. We are two completely different worlds. We belong to the Eurasian, non-European world.
Eurasia Diary: The presidential elections always symbolize a new era in the life of any country. In Russia and Azerbaijan, the leaders remained the same. Will the foreign and domestic policies of the countries change? Should we expect progress in the settlement of the Nagorno-Karabakh conflict?
Oleg Kuznetsov: First, let's talk about the internal policy of the countries. Today it is completely unclear how the internal policy of Russia and Azerbaijan will develop. The head of state is a person who forms the general strategy. A new government structure will be formed. When the final composition of the executive branch of the government is approved, then it will be possible to speak more specifically.
I do not think that the foreign policy of Russia and Azerbaijan will change. Our countries are in such conditions that they have no room for maneuver. They have a choice: to continue the course taken earlier or to capitulate. Russia will continue to uphold the right to consider itself a world power, rather than a regional one. Azerbaijan will seek to regain its territorial integrity.
The processes that are taking place in Armenia clearly show that the country is emerging from Russian influence, falling under the influence of the West. For a long time Armenia was under control of Russia. As a result of the international sanctions, Russia has no money to maintain its satellite.
Foreign investment requires one thing - the ability to manage political power to ensure the safety of money and return on investment. That is why the former Armenian ambassador to Great Britain became the head of state in Armenia. He is appointed to be looking for European investments in Armenia.
Natalia Guliyeva