Information spread by Armenia about alleged firing and fighting in several directions has no basis - MoD
Read: 246

Israel's missile strikes on Syria are a campaign of Iran and Russia - Expert
Read: 233 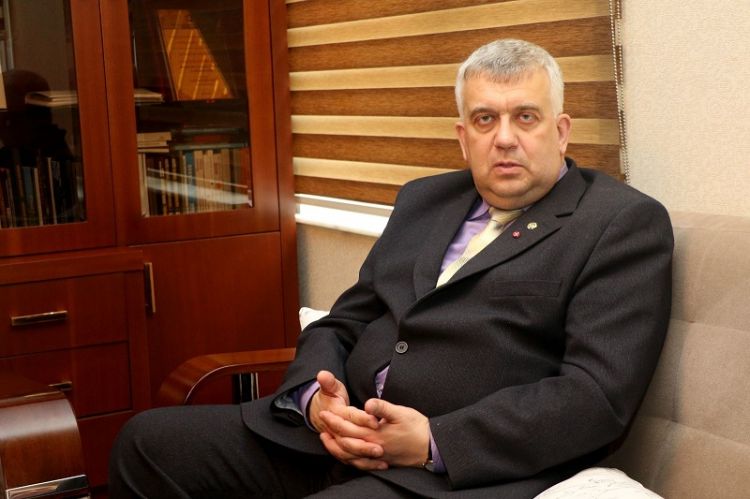 Open letter to Mr. Armen Ashotyan, ex-minister and deputy of the Republic of Armenia
Dear Armen Gevorkovich!
Today, when you are no longer a deputy of the National Assembly, not the Minister of Education of the Republic of Armenia, not even a functionary of the parliamentary party, but just a regular person like me, and we are both in the same social status in our countries. I publish this open a letter to you to talk man-to-man. I decided to speak out in defense of the director of the Information and Press Department, the official representative of the Russian Ministry of Foreign Affairs, Maria Vladimirovna Zakharova, to whom you addressed in previous day with your open letter of a very impudent tone and ignorant content.
To begin with, I want to point out to you that an appeal by name to an official with a name and patronymic that are well known, and moreover towards a woman it is regarded as rudeness and lack of education in Russia. I will neither discuss your level of education nor the fact that you were the Minister of Education of the Republic of Armenia, and I will only say that you can hardly find response in front of the Russian Ministry of Foreign Affairs after demonstrating such a clear disrespect. Especially after you have turned into a person in your own country without a certain official status, whose private opinion can be neglected in this situation.
I also want to remind you that the respected Maria Vladimirovna Zakharova is an official representative of the Russian Foreign Ministry, that is, an official who, by virtue of her official status, is entrusted with the right to communicate to the general public and the press the official position of the Russian Foreign Ministry on the whole spectrum of issues. You are a person with experience of participation in public administration in Armenia, but, nevertheless, you must understand that any changes in the content of her assessments of the policy of Armenia on the heroization of the Nazi criminal Nzhdeh, who is considered to be a national hero in your country, are not by her private initiative, but by a reflection of a change in the attitude of the political leadership of my country to this issue. And the proposal that you expressed to her once again to visit Armenia will not change anything and cannot change, even if such a trip to her country happens again. Therefore, it was very ignorant of you to criticize the actions of an official only because she was professional and highly qualified in fulfilling her official duties. Such an emotional attack on her does not honour you as an ex-minister and ex-deputy, who must understand that such escapades can be forgiven if acted by an ignorant politician from the street, but not by you, who has some experience in public administration. In view of all this, I am more than sure that you will not receive any official response from Moscow to your open letter. Now, I hope, you understand why I consider it important and necessary to spend my time and efforts in order to counteract attempts to spread the heroism of Nazism from Armenia as far as to the territory of Russia. I do not want my children and grandchildren to live side by side with the bearers of the ideology of Armenian Nazism, which you personally undoubtedly relate to. During the Great Patriotic War, my ancestors fought, injured, died on the battlefield, fighting to the death with Nazism, not so that then their grandchildren and great-grandchildren could have a handful of fanatical Armenian nationalists called the Republican Party of Armenia who dictate their will and teach how to live according to their national laws.
While there lives a "multinational people of the Russian Federation" under a unique Constitution, where there is no division of people on the basis of ethnicity, origin and religion in Russia, there cannot be said about modern Armenia. And while you fooled your Nzhdeh cult to your fellow countrymen, nobody in Russia will care it. But personally, you and your like-minded people, who consider themselves tsekhamards (Nazi ideologist), decided to subordinate the Armenians of Russia to their ideological influence and thereby crossed all possible "red lines", starting to dictate their will to the citizens of a completely foreign country. And therefore, the glorification of Nazism in Armenia has ceased to be an internal affair of your country, turning into an international problem that you yourself have created on your own.
Of course, I clearly understand that you are personally ready to refuse to participate in your country in the celebration of the 75th anniversary of the Victory in the Great Patriotic War, if only the cause of your life would not be harmed as a result - the glorification of the Nazi criminal Nzhdeh, on which you built your political career in Armenia. It is very painful for you now to see how the inevitable wave of complete collapse is approaching everything that you lived through all the years of your party-political and bureaucratic career. I dare to assure you that the denazification of Armenia is not far off, and this process will concern you first of all. And one should not blame Maria Zakharova, the official representative of the Russian Ministry of Foreign Affairs, for the upcoming events. You are already a former politician and former official, and it seems to me, life has not taught you anything, so far. And if you do not give up your pro-Nazi views in the spirit of the theory of the workshop Nzhdeh, then tomorrow you will turn into a former man thrown to the sidelines of history.
And now I want to ask you the last question, completely in the spirit of the workshop theory of Garegin Nzhdeh: what is it like to feel the result of spending overnight in the eyes of society from a workshopman into a real tsekhamards?