The attack of Armenian military was this time a military answer to the peaceful speech of the Azerbaijan President Ilham Aliyev in the UN - Turkish Professor
Read: 474 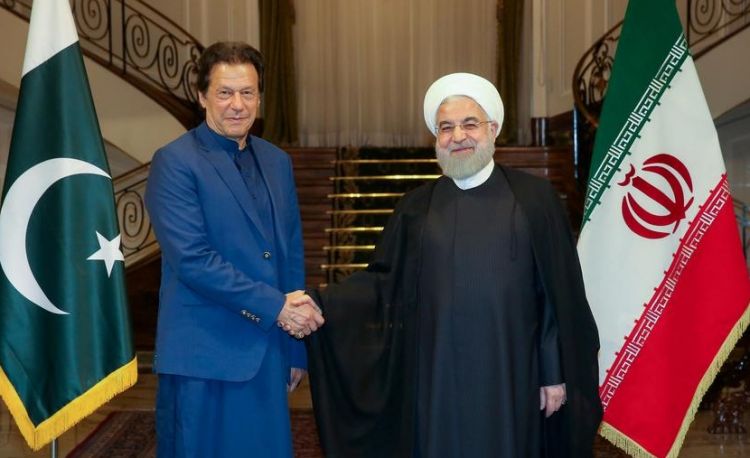 Prime Minister of Pakistan Imran Khan visited Tehran on 13 October amid tensions flared up in the region. Prime Minister met with Ayatollah Ali Khamenei and President Hassan Rouhani. The reason for the visit holds crucial importance for not only the region but the whole world.

Several incidents between two main regional powers of the Middle East increased tension and alarmed war signals. Saudi Arabia and Iran have been the main rivals for four decades. The tension is always high in the relations between the two states.

Attack on oil facilities and vessels raised the situation to a critical point. Two states began to threaten each other with waging war.

It is easy to understand that the military confrontation between two main energy suppliers can be catastrophic for the world economy and even can be resulted in a severe economic crisis.

Tehran and Riyadh seem not to compromise each other and in this condition, the third part is needed to stabilize the relations. Pakistan took this responsibility on its shoulders.

Saudi Arabia and Iran struggled for power for decades

The desire for dominance in the Middle East brings two ambitious powers into a confrontation. Arab spring resulted in change of governments which led to the emergence of power vacuum or in another word opportunity to expand in the Middle East. Syria, Iraq, Yemen, Pakistan and Afghanistan could be areas of proxy conflicts.

After the Iran’s Revolution in 1979, Iran started to expand its influence into Syria, Iraq, Lebanon and Yemen. Suddenly, Saudi Arabia found itself blockaded in this picture. In its turn, Saudis started to block Iran’s increasing impact in the region. The strategy of two states generated a struggle for power which recently reached to the dangerous level.

Saudi Arabia and Iran blamed each other for the attacks on oil facilities and vessels. On September 14, attack on Aramco oil facilities which provides the half of oil production outburst the confrontation. After nearly one month, on September 14 Iran oil tanker was hit by two missiles off by Saudi coast. These latest two event are not the only occasions of attacks. Several incidents happened between two sides. But such type of attacks increased during the past one year which it flared up the tension in the region.

The allies of Saudi Arabia like the US entered the conflict’s area of effect. US along with UK decided military deployment in order to protect vessels from possible attacks. However, EU didn’t pose enough active support for the defense ring in Persian Gulf. The US President Donald Trump also changed his mind and military confrontation idea was dropped.

Saudi Arabia and Iran has essential place in the foreign policy of Pakistan.

Two rivals also tried to use Pakistan in their proxy wars. 15-20% of the population is Shia Muslims in Pakistan. It is close to 30 million people. The majority is Sunnis. Religion is considered one of the main tools for Iran and Saudi to influence countries. But Pakistan could keep balance and benefit from two countries and remain neutral in the Saudi-Iran conflict.

After the Islamic Revolution, Pakistan became the first country to recognize the new government. Also, during Iran-Iraq war, many countries supported Saddam Hussein against Iran but Pakistan could hold its neutrality. After the death of Ayatollah Khomeini, Pakistan declared ten days mourning. There has always been ups and downs but the balance has always been preserved.

Saudi Arabia is one of the main trade partners of Pakistan holding third place in trade turnover. Beyond the trade, Saudi Arabia has special importance for remittances and investment. Saudi Arabia is a major destination for Pakistani immigrants. More than 2.5 million Pakistanis live in there. In this year, Saudi Arabia agreed to invest $20 billion in Pakistan.

The points we gave above are not all but it is enough for understanding the significance of the relations.

Iran faced sanctions after the announcement of the nuclear program. But Pakistan continued its relations and cooperation with Iran. When Saudi Arabia and Iran got started proxy war in Yemen, Pakistan decided not to be involved in this conflict. All of these can be understand the significant achievement of Pakistani diplomacy.

The tensions in the Gulf reached up close to deadlock. President of the US Donald Trump announced the plan of military intervention but then expressed no intention on waging war.  All parties to the conflict understand that there will be no winner in the possible military confrontation.

Prime Minister of Pakistan Imran Khan said that US President asked him to mediate with Iran. So, it shows the positive intention of US that war is not an option.

“I immediately spoke to President Rouhani yesterday after the meeting with President Trump, but I can’t say anything right now more than this except that we’re trying and mediating,” Khan told reporters at the United Nations on Tuesday.

Khan said he had been in Saudi Arabia before New York and spoken with Prince Mohammed bin Salman, who also asked him to talk to Rouhani. It means Iran’s intention is much more necessary. During Imran Khan’s visit to Tehran, Hassan Rouhani welcomed Khan’s gesture for providing peace and security in the region.

The conflict resolution between Iran and Saudi Arabia doesn’t depend on Pakistan’s effort much. The parties’ intention is much more necessary for reaching the final solution.

Pakistan’s main role is to bring two sides together and it shouldn’t be undermined. It makes Pakistan a key party for indirect talks between Saudi Arabia and Iran.

If Pakistan’s mediation will be successful, it could be a huge boost for Imran Khan’s government and Pakistan’s prestige.

All sides expressed positive intention and it increases the high possibility for generating positive results. In this condition, Pakistan again gets an opportunity to hold balance which is absolutely beneficial in terms of foreign policy and national interests. It will provide good image for Pakistan not only between its main partners Iran and Saudi Arabia but including whole world. Achievement in the de-escalation of conflict in the Gulf is the thing that whole world awaits.