...at least they should look at the images of the destroyed mosques and ask themselves who they are embracing! - Azerbaijani President 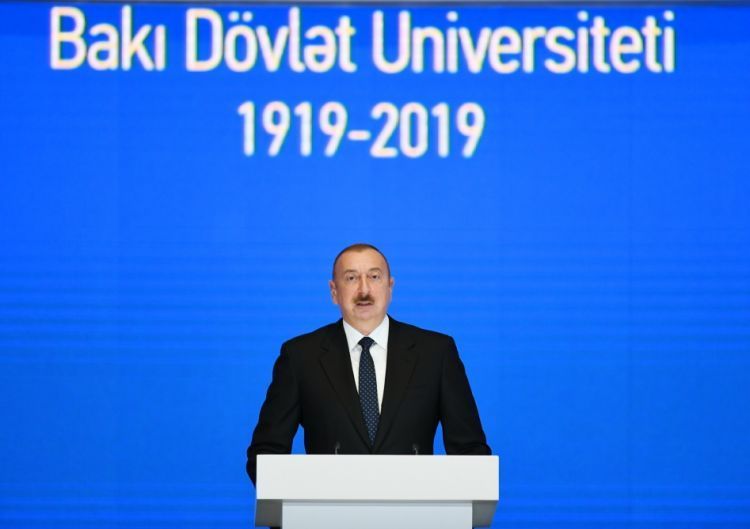 On November 26, the Congress Center hosted a ceremony to mark the 100th anniversary of the Baku State University.
Eurasia Diary reports that President of Azerbaijan Ilham Aliyev attended the ceremony.
The President of the State made a speech at the ceremony. In his speech, Ilham Aliyev criticized Muslim countries cooperating with Armenia:
"I have appealed to Muslim countries many times. I have openly addressed how you are embracing Armenia? How do you invite their leaders? Do you not see that they have demolished and insulted our mosques? They can go and see the pictures of the Aghdam mosque, Shusha mosques that they have destructed. These mosques in the occupied lands are not just our mosques, but mosques of the whole Muslim world, are not they? How can they blind to these facts? How can one be so hypocrite?
We have held several times events related to Islamic solidarity and repeatedly stated there about these facts. We will continue to do so, and also the monument to the Nazi Nzhdeh is also on the agenda. When some Muslim countries that have a relationship with that criminal state and embrace the Nazis, at least they should look at the images of the destroyed mosques and ask themselves who they are embracing! " There is no special call of a name but the question is what the main target in the message is? There is actually a lot of interesting points in the message of the president Aliyev mirroring the facts in the Nagorno-Karabakh. For further clarification, it is enough to rewind the events in near history. President didn’t overtly call name of the Muslim country from ethical point of view, and perhaps didn’t consider it so much significant as it sounded clearer that the targets was Iran, according to the experts views. Iran is Azerbaijan’s second Muslim neighbour country that also neighbours with Armenia. Looking back into the past few years it shows a number of archived photos of Iran’s top leaders embracing their Armenian counterparts in either Yerevan or Nagorno-Karabakh implementing a number of projects. Why no other Muslim states but Iran in spite of being of the same faith and having the same cultural and Islamic values..? Speaking to Eurasia Diary, head of the Near Eastern Research Centre, Sadraddin Soltan also commented on President’s message saying it was targeting directly Iran. He said Iran cannot prove itself a reliable partner with Azerbaijan because of not accepting this country being a secular Muslim state in the Caucasus and keeps Armenia rather close in partnership in the region.
However, Azerbaijan has a lot of expectations from Iran, expert said. He also added that the authorities in Iran are trying to show themselves close to us, and in some cases try to cling to official Baku, especially for majority of its citizens that are Azerbaijani Turks.
"In this regard, the Iranian authorities claim that their state is closer to Azerbaijan than Turkey. But Iran is not following a political line to justify these claims. Despite they signed and supported official documents on the recognition of Armenia as an occupant country in the Organisation of Islamic Cooperation. However, the official Tehran did not keep up with the signed documents and cooperated with Armenia in many spheres. According to the recent reports, up to 70 Iranian companies have invested in Armenia and even in occupied Nagorno-Karabakh, which was up to $130 million with promise of creating 1500 jobs. In the event held at the Ararat Sports Club as part of the official visit of the Prime Minister of Armenia Nikol Pashinyan to Iran this year, the message from Karabakh Armenia is still under the responsibility of the authorities in Iran. Even the US ambassador to Armenia, Lynn Tracey, in a recent statement said that we understand the economic cooperation between Armenia and Iran and do not consider it a blatant mistake. In other words, the US is aware of Iran-Armenia relations. In addition, the refurbishment of the "Blue Mosque" in Yerevan and the "Upper Govhar Agha" mosque in Shusha by Iran, and the presentation of these mosques as an example of Persian culture, is one of the main concerns of Baku. Given these facts, it is worth to mention that the president's speech is addressed directly to Iran".
“It is important to understand that the interests of these two countries do not always coincide. Iran is a country wishing to weaken Azerbaijan by making it to depend on countries in the region, and tries to undermine its independence and stability. Iran does not politically love Azerbaijan. The reason for this is that Azerbaijan closely cooperates with the West, especially in the US and Israel, and in no way accepts Iran's theocracy. This is the first side of the issue.
On the other hand, most of the Iranian population is Azerbaijani. They think further strengthening of the independence of Azerbaijan will turn it into a democratic state with economic development, could also lead to the integration of South Azerbaijan into the north and the growing tendency to leave Iran. That is why Iran always treats Azerbaijan’s political views with disrespect, so cooperates with Armenia without any hesitation.”
by Elnur Enveroglu