What did Vladimir Putin signal in his speech during CSTO Summit? - Analysis | Eurasia Diary - ednews.net

Apophis meteor will gently pass by Earth tonight - experts warn it could collide with our planet in future
Read: 3668

What did Vladimir Putin signal in his speech during CSTO Summit? - Analysis 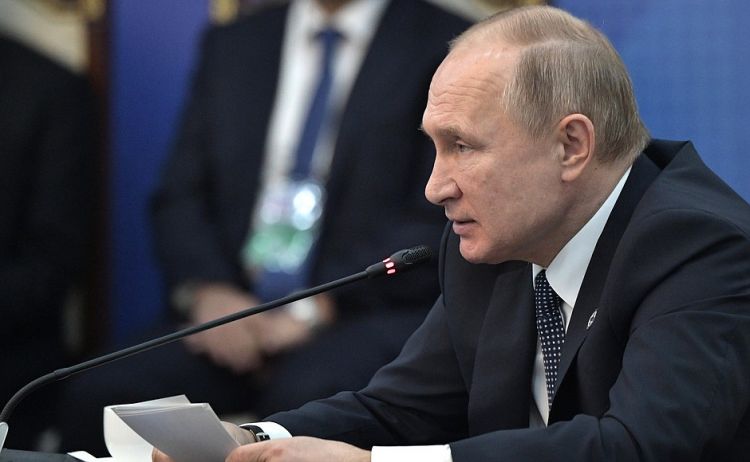 Yesterday, leaders of Armenia, Belarus, Kazakhstan, Kyrgyzstan, Russia, and Tajikistan gathered in Kyrgyzstan’s capital Bishkek for The Collective Security Treaty Organization (CSTO) Summit. During the meeting, several vital issues and potential for further collaboration were discussed. As a result of discussions, several documents were signed.

During the summit, the Russian presidency for the next period is announced. Noting that, the presidency of the organization is carrying on "rotating presidency" format.

Russian President Vladimir Putin touched upon such important targets of CSTO. As a president of the country presiding the organization for the next year, analyzing his speech is very important.

The Eurasia Diary research journalist Ulvi Ahmedli pointed out the Russian President's speech in the CSTO summit for a better understanding future steps of CSTO. Enhancing military cooperation and increasing the collaboration area includes top priorities of CSTO. The documents signed in the summit covers co-production and integration ties between defense industry companies of the CSTO member states and the procedure for organizing and conducting joint intra-CSTO research and development projects.

After mentioning military cooperation, he also emphasized combat against terrorism.

“We believe it important to keep up joint operations to identify and to eliminate international terrorist groups within the CSTO space, their bases, and sources of funding,” Vladimir Putin said during the summit.

Terrorism problem Conduction several anti-terror operations in the Middle East resulted in a huge blow to terror organizations. Regarding this, such Islamist terror groups can be pushed into Central Asia.

Strengthening the Tajik-Afghan border is the main priority in this context. This year has been reminded of several attacks in Afghanistan committed by the Taliban. US-Taliban talks stayed fruitless.

Afghanistan's case has always existed in the region, but a new wave of terrorism can be emerged by the activation of ISIS. On November 6, 17 servicemen were killed in the Uzbek-Tajik border and ISIS confirmed its presence in the attack.

This year, Russian intelligence warned with the grow of ISIS presence in Central Asia.

“Russia will help expand the circle of friends of our organization through developing cooperation with all the states and international associations that may be interested in doing so. Notably, last year we approved a package of documents opening up the opportunity for granting the status of CSTO observer or partner,” Vladimir Putin told.

Enlargement of CSTO was also among the discussed issues. Russian President Vladimir Putin stated the potential of CSTO’s expansion in his speech. “Russia will help expand the circle of friends of our organization through developing cooperation with all the states and international associations that may be interested in doing so. Notably, last year we approved a package of documents opening up the opportunity for granting the status of CSTO observer or partner,” Russian President said.

The potential members with observer status can be considered as Azerbaijan, Iran, and Syria. Russian dominated organization can grant this status to only strategic partners and geopolitically close to Russia.

Azerbaijan suffers from border integrity for almost 30 years. Azerbaijan has great military potential but the geopolitical situation doesn’t allow it for conducting military operations for the liberation of its lands. Because such kind of actions can give Azerbaijan a strong hand in the negotiation process. Having the strongest and the key player in the region in your side can give Azerbaijan a new opportunity to reach its goals.

Pressed by Western bloc can push Iran to collaborate with Russia. Entering to CSTO can recognize Iran’s influence in South Caucasus with economic partner Armenia and to Central Asia with Persian-speaking Tajikistan. Recent protests in Lebanon, Iraq, and strengthening of the anti-Houthis coalition could deprive Iran of its influence in the region. CSTO can offer new potential for Iran in this case.

Entrance to the Mediterranean Sea has vital importance to Russia and this dream can be provided by only Syria. Maintaining a military base in Syria permanently can serve for Russia’s interest. It could be guaranteed by possessing CSTO membership.

At the end of his speech, Putin invited member states for the celebration of the 75th anniversary of Victory in the Great Patriotic War.

“Next year, we will jointly celebrate the 75th anniversary of Victory in the Great Patriotic War. We are looking forward to seeing the leaders of the CSTO member states at the celebrations in Moscow on May 9, 2020,” Putin invited all members for the celebration.

Every year on 9 May, Russia celebrates Victory Day with a military parade. Inviting allied members to the participation of remarkable event can be perceived as a message for unity and solidarity.