Iran urgently deployed dozens of missile systems on the coast of Strait of Hormuz
Read: 1270

Russia is ready for a nuclear, chemical or biological weapons-based war 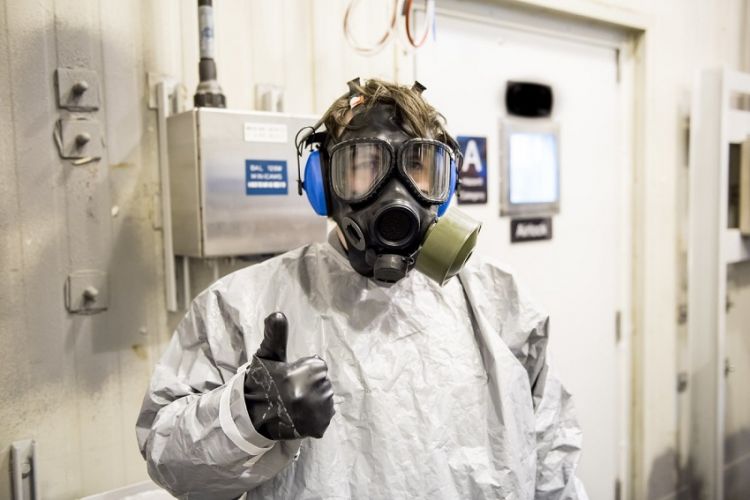 The threat of chemical and nuclear warfare loomed large over most militaries during the Cold War. The development of new nerve agents during the 1940s, as well as advanced delivery systems later on meant that chemical weapons could be delivered with precision and deadly effect. As such, most militaries trained extensively for the chemical threat. However, those on the “Eastern” side, the Soviet Union and the Warsaw Pact states, developed a reputation for extensive preparation.

But how much of this remains today?

In the Russian CBRN (РХБЗ) troops, the legacy of Soviet preparation has not only survived, but thrived. New CBRN defense vehicles and equipment continue to be procured, and CBRN equipment is often displayed prominently at large expositions, like Army 2019. The special battlefield role of the Russian CBRN troops is also probably a reason why their capabilities are exercised more. In addition to chemical attack and defense, CBRN troops are in charge of operating battlefield smoke generators and the powerful TOS-1 and TOS-1A heavy flamethrower systems which can fire incendiary and thermobaric rounds. CBRN troops are also armed with the powerful RPO-A thermobaric rocket launcher, which can level weak houses in a single shot.

The Russian military also undertakes more CBRN training as a whole. In addition to larger drills involving the CBRN troops, there are weekly drills in most combat units every Wednesday, which involve use of CBRN protective equipment and the completion of tasks with it on. Gas masks are also carried regularly regardless of the situation. Training drills with full-body rubber suits also often occur, as well as practice decontamination washes of armored vehicles. Larger scale CBRN exercises are also common, with one occurring in August 2019. Comparatively, most NATO soldiers seem to only train occasionally with CBRN equipment, with monthly familiarization at most.

On the civil side, stocks of gas masks, decontamination sets, and other chemical and biological defense equipment are placed in strategic locations around Russia. Federal documents about the responsibilities of Russian civil defense specifically state that defense against CBRN threats is part of the civil defense mandate. The current civilian AI-4 individual first aid kit held in Russian civil defense stocks contains antibacterial agents, radioprotective agents, an agent to treat carbon monoxide poisoning and antidotes against some chemical poisoning. Compared to regular first aid kits, most American or European civilians have, the AI-4 offers far better capability to treat victims of a CBRN threat.

However, in NATO, CBRN training has lapsed. While Czechia retains one of the only live-agent chemical weapons training facilities in NATO, there is far less focus on the CBRN threat in NATO nations, in both civil defense and military settings. While Russia has upgraded its CBRN reconnaissance vehicles twice since the 2000s, the United States last procured an upgrade for its German M93 Fox CBRN reconnaissance vehicles in 2007.

By Charlie Gao. He studied political and computer science at Grinnell College and is a frequent commentator on defense and national security issues.