Information spread by Armenia about alleged firing and fighting in several directions has no basis - MoD
Read: 226

Irish historian; Not the whole Armenian population was relocated by Ottomans - Truths about Armenian Genocide 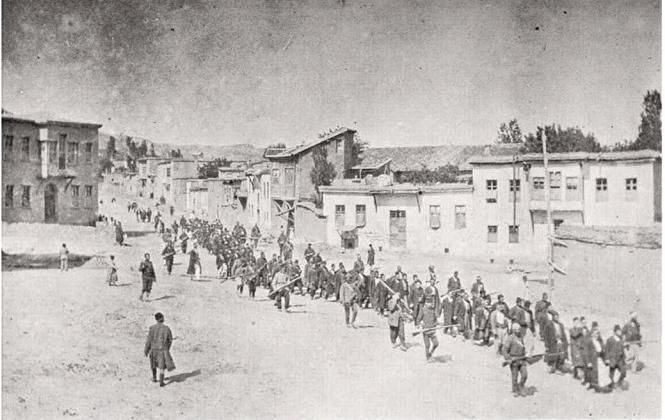 Irish historian Patrick Walsh shared his views with EDNews.net concerning facts about the events of 1915 in Ottoman Empire as well as Armenian crimes in the  early XX century in territories of Eastern Anatolia and Azerbaijan.

On 24th April 1915, which the Armenians commemorate as “Genocide Day,” what happened was the internment of a couple of hundred Armenians connected with the Dashnaks. Quantities of arms were seized by the Ottoman security forces, and suspects were moved by train to various locations and most placed under house arrest or told to report to police regularly. Those detained were granted a living expenses subsidy. Most detainees were subsequently released and survived the war. Only a minority, around 20, were subsequently hung as traitors. Probably nobody died on “Genocide Day”.

The relocation or forced migration of Armenians did not begin until June 1915. The forced migration policy is the centerpiece of the “genocide” allegation. It is suggested the Ottomans sent the Armenians on death marches into the deserts. However, the Turks acted in accordance with standard military practice. Britain, which considered itself to be the most civilized power in the world at the time, and who had been the greatest critics of the Ottoman Turks, had used a forced migration policy only a decade earlier in South Africa. It involved concentration camps, which were never employed by the Ottomans. Britain used the same policy again 40 years later in Kenya to suppress an insurgency. The U.S. and Russia did the same. Russia relocated huge amounts of Jews in 1915, in the months before the Ottoman operation, and nothing was heard of this in the Western media.

There was no evidence of a premeditated plan on the Ottoman’s part to remove the Armenians, let alone kill them. The forced migrations were improvised because of the catastrophic situation that had developed in early 1915 as a result of multiple invasions and an existential crisis. The famous British Cabinet Secretary once said the safety of the state is the highest concern. It is within this principle that the Ottomans acted. A Law was passed openly to declare the state’s intention and so that preparations could be made. Time was not always available in war areas, like the east, where Russian armies were close. However, it was insisted that convoys were guarded and life protected. A major problem was that most of the gendarmerie that would guard the columns had to be pressed into military service due to Armenian Dashnak action behind the lines – illegal in warfare.

Not the whole Armenian population was relocated, mainly those in the warzone and immediately behind the lines. Elsewhere migration was selective. Catholic and Protestant Armenians were less likely to be moved. Around 350,000 were totally exempted. Armenians in Istanbul were largely left alone and Moslems in the east were also moved. Other Christian minorities were treated differently. Armenians in the west were allowed back once the Gallipoli assault was beaten off. Convoys included their priests, canteens, and were provided with oxen and carts. Missionaries kept a watchful eye. Armenian possessions were neatly stored and labelled to await their return. All these things tend to suggest there was no genocidal intent. Of course, individual Turks and Kurds did a lot of bad things to the relocated people. Kurdish bands who were beyond the authority of the state, and who were outlaws in a war situation, resisting conscription, attacked many of the convoys. The Kurds, who the Armenians were deeply hostile to, took revenge for what the Dashnaks did to them. Ottoman employees also robbed and killed people, and there were some massacres in areas conducted by locals for various reasons that come to a head in catastrophic situations.

Talaat Pasha, the architect of the migration policy, established commissions in late 1915 to investigate abuse and crimes and ended the policy in the winter of 1915/16. Thousands of Ottoman officials were subsequently tried for maltreatment of the Armenians and about ten per cent were hung. These included commanders who failed to protect columns. The Armenians tried no one for massacring any Moslems. Criticism can be made about the inadequacy of the operation and the failure of the commissions to punish all who were guilty, but there is no evidence that the Ottomans had any intention of annihilating a race.

The forced migration policy adopted by the Ottoman State to deal with the Armenian insurrection was a western military measure employed to solve a military problem. It was outstandingly successful. Once the insurgents behind the front were separated from their mass base, and the small forces available to the Ottomans mopped up the Dashnak bands.

About 650,000 Armenians were relocated to Syria/Iraq. Around 400,000 went east to Russian territory, in Transcaucasia, under the influence of the war. Russia refused them the right to return when they captured the territory in which they lived. Over 160,000 died in this relocation which took place, entirely outside Ottoman territory. Around 500,000 Armenians were counted by U.S. observers in 1916 in Syria/Iraq. It appears, as far as we can be sure, that over three quarters survived their forced migration. Around 400,000 Armenians remained in their homes at the time of the Armistice in 1918, out of the pre-War Empire’s population of 1.6 million.

In addition, the massacres committed by Armenian Revolutionary Federation-Dashnaks in the early years of 20th century against Muslims and local Armenian population in eastern Anatolia and Azerbaijan.  In number of places large massacres of Moslems were carried out by the Dashnaks, including Erzurum, Baku and Quba. The documentary evidence is very complete and detailed and mass graves have been uncovered. However, there is little knowledge of this side of events outside of Turkey and Azerbaijan. Even in the years when I wrote about the Great War and the Ottoman Empire I was totally unaware about the extent of killings of Azerbaijanis that took place.  It was only when I visited Azerbaijan that I learnt of these atrocities and they shocked me. In the West the Armenians have the image of helpless, innocent victim and there is little knowledge of the Dashnak activities, which from 1915 were covered up by their allies in the West, who had developed a narrative that they did not want destroy,  which included the “terrible Turk” and the “ravished Armenian”. Of course, when you read honest accounts of people who were there, like British and Russian officers and later American investigators, the truth comes out. Professor Justin McCarthy, an Irish American geographer, has done extensive demographic analysis of casualties in Eastern Anatolia and has found out that Moslem death rates were at least as high as Armenian. The Dashnaks perpetrated campaigns of extensive ethnic cleansing and killing in the Western Caucasus between 1917 and 1920 in Erivan, Karabakh and other areas. Armenian leaders like Pasdermadjian and Dro boasted of their exploits and how they had killed more Tatars than Armenians had died. And logic suggests this was true because the Armenians were the most militarized elements in the region with long-standing organizations, who were well armed and trained, and capable of carrying out such terrorism against the Moslem civilian population.  I am aware, too, about Dashnak actions against their own people who they often terrorized into submission. I have no hesitation in seeing ordinary Armenians who just wanted to live in peace with their neighbors but they became victims of the whole tragedy as just much victims as ordinary Moslems. But you never see the same recognition of Moslem suffering in Armenian accounts.

Patrick Walsh is an author of numerous books, a political analyst and a teacher of history and politics in his home land of Ireland.