Russian T-14 Armata tank could be transformed into nuclear weapon - US
Read: 1045 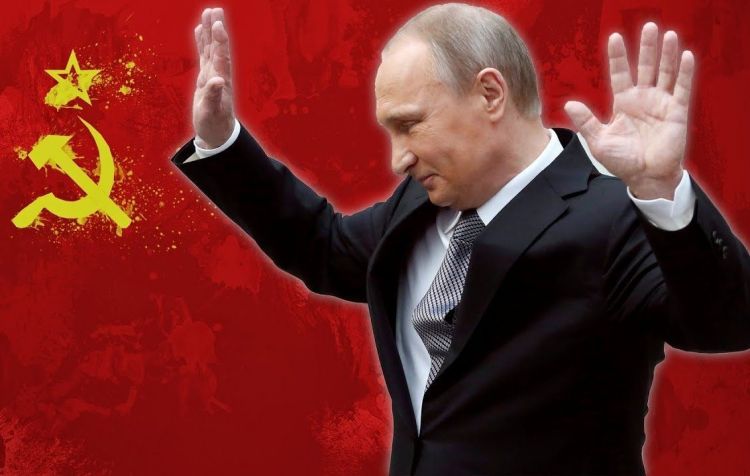 Russian President Vladimir Putin mentioned the integration of former Soviet republics to the TV channel “Russia 1.” Putin noted that joint efforts are going to be beneficial for everyone despite the fear of the revival of the USSR.

The revival of the USSR has always been Putin’s dream. He also expressed his regret about the dissolution of the USSR once. The new amendment of the constitution of the Russian Federation will ensure the next presidency of Putin. Without achieving his goal, it is hard for Putin to leave power. Putin always intends to hold the image of protector and he wants to stay at history as a person who re-build USSR.

USSR revival doesn’t mean to form the Soviet Union as in old times. But it means to intensify Eurasian integration within institutions like Eurasian Union and the Commonwealth Independent States. These institutions encompass economic, political, and military integration.

Outbreak of COVID-19 changed political situation worldwide and affects strongly to the international relations. 7 decade old EU is shaking by virus, the US and China faces economic decline and Russia is going to lose its power.

Coronavirus pandemic makes new chances for Russia but also it hit another side of the economy. Putin has two conditions good political situation and bad economic condition.

The political situation set up beneficial conditions for Russia to enhance its Eurasian integration and increase its influence on the post-Soviet republics. Russia’s main rival EU and NATO faced serious problems arising from the inside. It is a chance of the century for Russia to build its image positively but it needs economic power to aid ravaged economies by COVID-19. Russia can increase its popularity in the EU and post-Soviet and the Middle East also.

The coronavirus wave brought out the weakness and lack of unity within the EU. The common ground on burden-sharing of economic damage by COVID-19 couldn’t be reached. Germany along with Netherland and Austria opposed extending spendings on tackling coronavirus, while France, Spain, and Italy condemned the northern European group for their non-sufficient efforts.

Before coronavirus, the EU’s budget for 2021-2027 was very debatable some richer countries like Germany and the Netherlands want a smaller budget. After coronavirus EU confused to manage the budget, it is hard to decide to spend whether on Spain and Italy suffered from virus lockdown or on defense and technology.

If we travel through history we will notice that USSR was founded by Belarus, Ukraine, and South Caucasus apart from Russia. Russia needs those countries and also Kazakhstan the biggest country in Central Asia for completing Eurasian integration. Belarus and Ukraine are in need, it is an ultimate chance for Russia to boost its image. Russia couldn’t achieve to form the Union of State with Belarus during decades and the relations with Ukraine worsened after EuroMaidan.

Russia is going to seize the moment and make stronger relations in both West and East. Russia skillfully used the division of European Union leaders and send aid to Italy.  For boosting its image, Moscow continues its aid globally including the US, China, and former Soviet republics.

In his speech to the “Russia 1”, Putin gave commonalities in the post-Soviet like Russian language and common infrastructure.  It indicates that Putin’s dream of Eurasian integration still stays.

2020 damaged the US and European Union economy and internal stability, it is an ultimate chance for Russia.

Russia needs economic resources to ensure stability inside of the country and also to foster investment in target areas.

In these hard economic conditions, Putin shows himself very confident and allocates its resources in foreign policy as if everything is right inside of the country. Russian Deputy Foreign Minister Sergei Ryabkov said that they can lead global healthcare efforts amid coronavirus.

For being a good leader, Putin needs a high approval rating. It is needed to ensure people and the leaders for the perspectives of Eurasian integration. The Moscow Times, Washington Post, and other media outlets consider coronavirus a challenge to Putin, and grow of infection could lead to the reduction of Putin’s approval rate. According to Statista, from 2014-2018, Putin’s approval rating was above 80%, but in 2019 it falls to 64%, after his address to nation 25 March it rose to 69%. Nevertheless, Putin’s rating fell to 61% this month and there is no positive indication for further development.

Coronavirus pandemic hit Russia’s economy and Putin’s approval rating which is essential for raising Eurasian integration up to a new level.

Coronavirus made new opportunities for Putin to extend Russian influence over post-Soviet and build up a new positive image as a protector. However, the virus hit not only Western countries but also the Russian economy. It is bad situations for Putin while his rivals down. Putin was inch close to realizing its dream but he is lack of power.

The chance of strengthening the integration also depends on the speed who will save economic problems fast. If Russia could regain its power while the EU can’t do the same, Russia will have the chance in economic stance. The will of post-Soviet countries will also play a role. Putin’s dream stays on the prices of oil and the speed of recovery of the economy. Putin has political and security influence over the region through various institutions but it should be enhanced with economic power.