The political and economic successes of the 1st ever Muslim republic | Eurasia Diary - ednews.net

The political and economic successes of the 1st ever Muslim republic 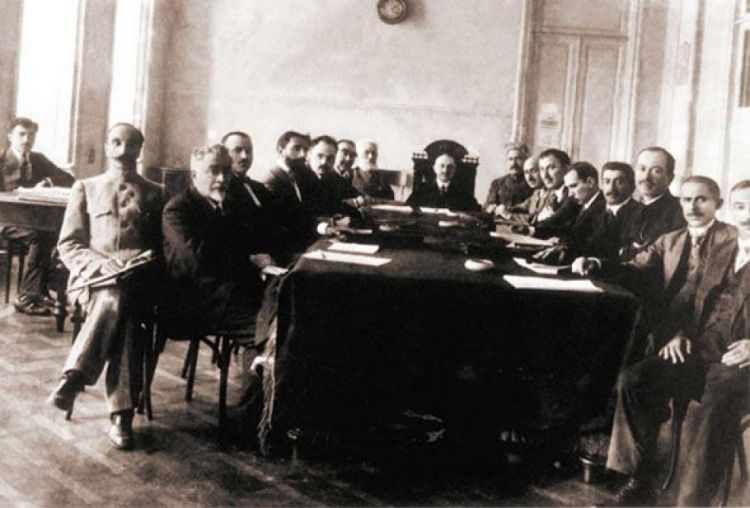 The First World War entailed consequences in Russia that affected society hardly-it increased poverty, made living very poor and aggravated economic and social situation in the country. In 1917, in February, all these circumstances invigorated more than million people terribly to overthrow monarchic regime in Russia who had been exhausted from throes of poverty and misery for long period, and they were able to realize it successfully.

After the collapse of the monarchy, the Provisional government was formed, but it was short-lived, because of taking control of power in Petersburg by Bolshevik forces under the leadership of Vladimir Lenin. In the course of this term, members of the Russian Constituent Assembly from the South Caucasus did not go to Russia and gathered in Tiflis ( capital of Georgia) in order to create new Transcaucasian Republic. On February 14, 1918, in Tiflis They founded Transcaucasian Seym-Transcasian  parliament.

The Moslem faction of the Seym comprised of 44 delegates elected to the Constituent Assembly from the region. Altogether they represented more than a million Turko-Moslems residents of Azerbaijan and the whole Southern Caucasus. In fact, the Moslem faction or the Council of Moslems was executing the functions of the Moslem Parliament of Transcaucasia.

However serious contradictions and conflicts of the national interests hampered abilities of both the Transcaucasian Seym and the Republic of Transcaucasia to undertake any specific steps. Finally, on May 25, 1918 the Georgian delegation left the Seym and proclaimed the independence of Georgia on May 26.

The National Council, led by Mammad Amin Rasulzadeh, proclaimed a declaration on the establishment of the Democratic Republic of Azerbaijan on 28 May 1918. The Declaration of Independence indicated formation of the first democratic republic of the parliamentary model not only in the Turko-Moslem, but the whole Oriental world.

The major provisions of the Declaration adopted by the National Congress read as follows:

During the same constituent meeting, the first Provisional Government of the Democratic Republic of Azerbaijan headed by Fatali khan Khoyski, a non-party member, was appointed by the National Council of Azerbaijan.

On November 19 the National Council  adopted the law on convocation of the Constituent Assembly (the Parliament of Azerbaijan with broader membership) and on December 3 of the same year, halted its activities completely. During this period (also known as the National Assembly period), the Azerbaijan Parliament functioned in Tiflis, Ganja and Baku. The Baku period of the parliamentary history of the Democratic Republic of Azerbaijan lasted for 17 months only,  December 7, 1918 until April 27, 1920. These were the dates of the first and the last parliamentary sessions. Altogether there were 145 meetings held.

Within this period the Parliament of the Democratic Republic of Azerbaijan passed a number of extremely important laws and decrees in the spirit of the principles set forth in the Declaration of Independence and taking note of the incumbent historic situation. The laws and decrees adopted were primarily aimed at the protection of the country's independence and territorial integrity, observation of human rights and liberties and creation of a democratic state based on law. The ultimate goal of these legislative activities was formation of the three branches of power: legislative, executive and judicial ones.

The government and the parliament together in the Democratic Republic of Azerbaijan implemented considerable suitable policies for the comprehensive and deep development in fields of economy, education, science, health, culture and army.  A number of secondary and high schools, including those for girls, pedagogical training schools, libraries and hospitals in undeveloped regions were opened by the government. Moreover, the parliament adopted a law on the foundation of the first university in the country that is now called Baku State University.

Furthermore, the first and biggest attainment was fulfilled in the Muslim and Oriental world by the Democratic Republic of Azerbaijan in that opportunities were given to women to realize their right to vote in elections in 1918, even before some European countries.

The territory of the Azerbaijan Democratic Republic is spoken about for the first time in the Declaration of Independence. The document says that Azerbaijan, located in the south and east Trans-Caucasus, is an independent state. The memorandum was submitted by the Azerbaijani delegation to the Paris Peace conference in 1918.

The main aim of the foreign policy of the Democratic Republic of Azerbaijan was to be recognized by world. The information was sent to number of European countries regarding the establishment of the independent state in South Caucasus. Therefore, the government strove to achieve successful foreign policy for three years. First, relations were normalized with Georgia; territorial disputes were resettled with Armenia, as well as numerous agreements were signed with Iran during a short period. A Friendship Agreement was signed with Ottoman Empire in 1918 too.

In another important step in foreign policy, the delegation of Azerbaijan realized successful negotiations with the representatives of western powers in Istanbul and Paris peace conferences. In May 1919, politicians of the new republic met with leaders of Britain, France and the United States in the Paris peace conference. The Memorandum of Azerbaijan Democratic Republic was presented to the president of the USA, Woodrow Wilson. As a result of the successful foreign policy, the Democratic Republic of Azerbaijan was recognized as a de-facto state in the assembly of the Supreme Council of the Paris Peace conference on 11 January 1920.

But, taking advantage of the international situation, Bolshevik Russia occupied Azerbaijan and put an end to its independence. The Azerbaijan Republic was subjugated and renamed Soviet Azerbaijan after 23 months of existence.

The Azerbaijan Democratic Republic was a Parliamentarian Republic, due to fact that most functions in the political and economic administrative systems were enforced by the Constituent Assembly.  The republic of 1918-1920 years in the South Caucasus was first modern and secular democratic republic in Muslim and Eastern world where all rights and freedoms were equalized not only between ethnic and religious groups, but also gender groups. There were numerous members in parliament ( Jews, Russians, Ukrainians  and Armenians) who represented diverse ethnic and religious societies in Azerbaijan, moreover some Jews took high positions in the government.

During this period, the number of ethnic groups-especially Jews and Russians were free to take education and imprint newspapers in their languages. Laws that  had been adopted by the parliament of Democratic Republic for three years were based on the rule of law and fundamental principles.