Special Session of the UNGA related to COVID-19 to be convened at the initiative of Azerbaijan | Eurasia Diary - ednews.net

daily news
Representatives of mediating countries to speak of need for dialogue more often Karabakh - Russian expert
Signatures collected to convene an extraordinary session of the Milli Majlis of Azerbaijan
The dawn of a new era for Azebaijan-Israel relations
Caspian countries to be united by "green diplomacy"
ISIL terrorist attack in Saladin leaves 7 killed, 17 injured
Biden says he is hopeful about talks with Russia on strategic stability
General plan of Karabakh and East Zangazur under development
A group of Azerbaijani firefighters arrived in Turkey - PHOTOS
﻿

Ankara to mediate dispute between Moscow and Kiev
Read: 465 Continuation of Biden-Putin summit meeting - The results are due to a conflict of interests in the region –Expert
Read: 325

Russia may be behind Armenia's military provocations in the direction of Kalbajar - Engin Ozer
Read: 218 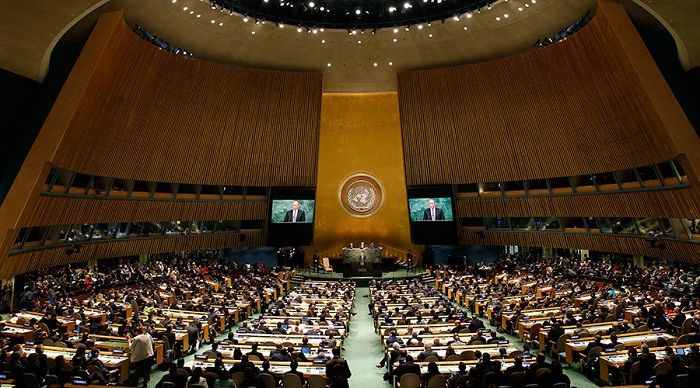 When dystopian scenarios became our everyday reality with COVID-19 reigning over our lives and divesting large numbers of world population of their normal routines, little did everyone know that very soon we would also be experiencing a pent-up disenchantment with the role played by global institutions that are tasked with the protection of international peace and security. While the magnitude of the contagion has turned great geographic areas into quarantines zones, with concomitant physical and mental health challenges brought to millions of people, the message sent out by the United Nations –the largest global multilateral organization – is rather mixed and definitely not reassuring. Despite the fact that the UN General Assembly adopted its first ever resolution on the COVID-19 on April 2, 2020, calling for “global, solidarity, multilateralism and international cooperation” to cope with the pandemics, the voice of the UN Security Council is still missing as it has failed on numerous occasions to adopt a resolution that would finally categorize the COVID-19 as a threat to international peace and security. While the World Health Origination (WHO) was and still remains the frontrunner of the international response to this unprecedented health crisis, some governments, however, did not unfortunately demonstrate a unified and solid support to these global efforts, having thus occasionally yielded to their own national agendas and opted for criticisms and recriminations instead of forging global unity and cooperation in these difficult times.

The conceptual debate as to when and how the pandemics will be defeated, impending surge of the second wave, as well as about the contours of the post-COVID-19 world is ongoing in parallel to practical efforts on the part of medical community, scholars, pundits and politicians to ease the sufferings of millions of people worldwide, save and repair whatever vestige of normalcy we may still have. Azerbaijan was among the countries that having assessed the dangers of the pandemics took very swift measures upon the news about the first infection case on 28 February as the government put the country into quarantine and enhanced it as the situation so demanded. The special Coronavirus Support Fund was established with 19 March 2020 Presidential Decree and the government prepared 9 programs worth about 3,5 billion manats- 3 % of the GDP to support the economy and extend social benefits. Many new hospitals were built for COVID-19 patients and local production of medical masks was introduced right from the beginning. Like many other countries around the world, Azerbaijan is also still battling the COVID-19 induced challenges, however, it has been doing so in a well-prepared and consistent manner that oozes confidence that one day we will beat this global health crisis and return to normalcy, whatever that might mean in a post-COVID-19 world.

Azerbaijan as an emerging and ambitious “middle power” did not obviously suffice with its domestic achievements, as the dynamics of the pandemics shows that “no one is safe until everyone is safe”. As the incumbent Chair of the Turkic Council and the Non-Aligned Movement (NAM), the country initiated two online summit meetings of these two institutions on 16 April and on 4 May, respectively, in the midst of strict lockdowns in many parts of the world. Being an ardent believer in the value of international cooperation and multilateralism, it was only natural to expect Azerbaijan to initiate a discussion within these institutions in order to foster unity of purpose through effective multilateralism, and seek for common solutions that would attenuate and eventually overcome challenges imposed by this global contagion. Azerbaijan’s once again assuming a leadership role especially in such difficult times to promote the norms and values it believes in, therefore gibes with its image as a norm entrepreneur and a “middle power”.

NAM- the largest international body after the United Nations, opts for not aligning with or against any major powers and promotes “the national independence, sovereignty, territorial integrity and security of non-aligned countries”. In line with its broader foreign policy objectives Azerbaijan vowed to promote multilateralism, international cooperation and solidarity also within the NAM group during its chairmanship in 2019-2022.Among the important outcomes of the above online NAM summit on 4 May, the idea proposed by President Ilham Aliyev that NAM countries could initiate convening the special online session of the UN General Assembly on COVID-19 on the level of Heads of States and Governments gained particular traction. This initiative voiced an innate belief by many that more should be done on the part of international organizations to stave off the repercussions of the COVID-19 and unite global efforts through fostering more cooperation and multilateralism as opposed to pursuance of isolationist and national agendas in the face of this calamity.

It was this confidence and trust in Azerbaijan’s initiative by NAM countries and the greater UN community that the proposal of convening of the special session of the UN General Assembly in response to COVID-19 was supported by more than 130 UN Member States, which makes 2/3 of the UN states. The only country that rejected the initiative was Armenia, however, the decision was adopted through the “silence  procedure” by the majority of the UN Member States. So far only 30 UN General Assembly special sessions have happened as they are different from regular sessions. It has also been quite a while since the UN General Assembly adopted its second resolution on COVID-19 on 20 April 2020, calling for “International cooperation to ensure global access to medicines, vaccines and medical equipment to face COVID-19”. However, it is not enough. This health crisis is a moving target and continues to pose unseen and so far untrammeled challenge to our existence in the habitual system of international relations. Discussions within the UN on the issue should not cease, quite the contrary, they should carry a particular importance and provide a sense of direction in the absence of the UN Security Council resolution on COVID-19 threat.

When seeing the current international response to the crisis in such a disarray, with shambolic UN Security Council and mostly low profile demonstrated by other international institutions, neorealists would cheer, as their central thesis of an “anarchic and self-helping international system” seems to once again prevail. However, the humanity has not suffered so many wars, deprivations and sufferings throughout this century alone to turn a blind eye to the lessons learned. The World War II became an inflection point making states realize that they cannot exists in isolation, and cooperation is the best strategy to stand against common threats and enemies. Many international institutions were therefore created afterwards, setting the stage for the never ending debate between neorealists and neoliberalists (institutionalists) as to the relevance and influence of these organizations in interstate relations and in shaping the world order. Many would agree that humanity’s battle against COVID-19 also resembles a war, this time against an invisible enemy. We may as well dub it the World War III given its proportions and uncertainty that it brings to all of us.It is therefore incumbent upon each and every member of the international system to contribute to the global efforts to fight this scourge. Azerbaijan, once again, as an ardent believer in the power of international institutions, cooperation and solidarity, stood up to its role as a norm entrepreneur by having initiated and achieved the summoning of the special session of the UN General Assembly in response to COVID-19. Every effort matters, but one is not enough to cope with such a crisis if it is not multiplied by the like-minded. Azerbaijan’s efforts to achieve global solidarity was supported first within the NAM, and later, by the rest of the UN community, and our expectations from this special UN General Assembly session are first and foremost related to the message of solace that we are not all alone in this war.

This article was originally published in Modern Diplomacy.