New Hotspot in the Conflict Between Armenia and Azerbaijan | Eurasia Diary - ednews.net

New Hotspot in the Conflict Between Armenia and Azerbaijan 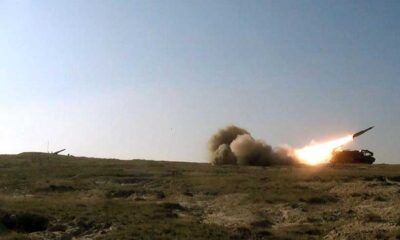 Yerevan, in its turn, have accused Baku for an attempt to escalate the long-standing conflict. The Armenian Ministry of Defense stated in response that the Azerbaijani side was the first to use the artillery in order to capture a strategic point by shelling their positions. Armenian MoD claims that a group of Azerbaijani soldiers tried to cross the Armenian border with an UAZ automobile and went back to their positions after Armenian side’s warning,leaving the car behind.But Azerbaijani officials argued, “If the Azerbaijani side wanted to cross the Armenian border, which in an undeclared state of war, it would have carried out the attack not with cars, but in armored vehicles.”

On July 10, 2020, the Security Council of the Republic of Armenia hold a meeting in Yerevan, chaired by Prime Minister Nikol Pashinyan. During the meeting Armenia’s National Security Strategy was approved in addition to discussing other security-related issues. As the attack of the Armenian armed forces in the direction of Tovuz district on the state border between Azerbaijan and Armenia happened two days after this meeting, there might be a possible link between these two events. Another fact that should not be overlooked is the visit of Feliks Tsolakyan, Armenian Minister of Emergency Situations to Tavush region on the border with Azerbaijan on July 11. According to official information, Tsolakyan got acquainted with the regional branch of the ministry, held meetings and gave instructions. It is worth recalling that Davit Tonoyan was the Minister of Emergency Situations before appointed Minister of Defence.

Two countries have been living in a state of war for 30 years due to unresolved territorial problems around the Nagorno-Karabakh region of Azerbaijan, however, after the war of 1992-94, heavy artillery rarely entered into their dispute. The last time large-scale hostilities between Armenia and Azerbaijan were recorded in April 2016 and called the “four-day war”.

Since 1992 the conflict is being mediated by the OSCE Minsk Group co-chaired by Russia, France and the United States. Unfortunately, there is no progress achieved at the negotiation table though the Minsk Group Co-Chairs revealed the Madrid Principles in 2009, which was the subject of discussion between the two parties of the conflict. The recent development manifested that Yerevan decided to abandon the Madrid Principles and opted for solidifying the result of military occupation. “The provocation by Armenia, perpetrated along the border, is yet another evidence that the official Yerevan is disinterested in the negotiated settlement of the Armenia-Azerbaijan conflict.”said by Hikmat Hajiyev, Assistant of the President of the Republic of Azerbaijan. The Azerbaijani side called the international community to condemn Armenia’s policy of aggression against Azerbaijan and hold Armenia accountable for its provocations on the border.

There are hot debates on the reasons of the escalation and who started the fire first on the border between Armenia and Azerbaijan. First, after the negotiations reached impasse, the rising of tension was inescapable. In May, Armenian Prime-Minister Nikol Pashinyan visited historic Azerbaijani city of Shusha in the occupied territories, provoking strong sentiments in Azerbaijan. Secondly, some experts argue that provoking conflicts will distract people’s attention from severe economic problems caused by the COVID-19 pandemic. In this sense, situation in Armenia is worse than in Azerbaijan.

As for the question of who started the fire first, if Azerbaijan attacked first, logicallyit had to choose any direction from the positions on the line of contact, which under international law gives full authority to do so.However, the incident at the inter-state border gave Yerevan an opportunity to call for the protection from a CSTO military alliance (Armenia, Belarus, Kazakhstan, Kyrgyzstan, Russia and Tajikistan). Despite an initial plan to convene the emergency meeting, the CSTO then cancelled the meeting, issuing only a statement to both parties to refrain from the use of force.

Some other experts argue about the importance of energy and transport infrastructure that Armenia might target in Azerbaijan near Tovuz region. The successful implementation by Baku several energy projects with Georgia, Turkey and the EU happened against the background of the increasingly isolated status of Yerevan. However, this scenario undoubtedly will lead to the large scale confrontation between the two states.

It is clear that the main underlying reason of the current border clashes between Armenia and Azerbaijan is the unresolved conflict. Perpetuating the status-quo in the occupied territories of Azerbaijan is no longer an option.

This article is written by Nagi Ahmedov