2750 tonnes of ammonium nitrate stored at Beirut warehouse at centre of explosion
Read: 1159

Armenian-Azerbaijani Border Clashes: - The Russian Dimension and Beyond 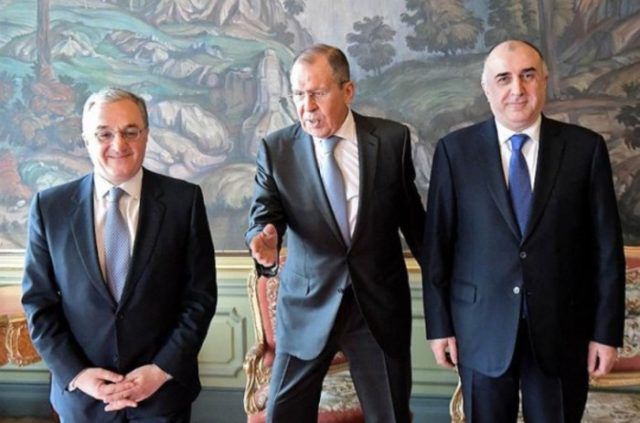 Following the outbreak of deadly Armenian-Azerbaijani border clashes on July 12 (see EDM, July 14, 16, 20 [1][2]), Russia’s state energy giant Gazprom reported that its local natural gas pipelines in Armenia were damaged, due to the shelling (TASS, RBC, July 14). Furthermore, the Moscow-led Collective Security Treaty Organization (CSTO) announced a meeting, at the request of Yerevan, which was soon postponed to an indefinite future date (Lragir.am, July 13). Both reports were almost certainly intended to serve as delicate warnings to Baku from Moscow.

On July 13, Russian Foreign Minister Sergei Lavrov spoke with his Armenian and Azerbaijani counterparts, Zohrab Mnatsakanyan and Elmar Mammadyarov, respectively, and called for an immediate ceasefire. Lavrov warned all members of the Organization for Security and Cooperation in Europe’s (OSCE) Minsk Group, which is mediating the settlement of the Armenian-Azerbaijani conflict, against making “declarations or actions that could provoke a further escalation of tensions”—most likely alluding to Turkey (Mid.ru, July 16). A week earlier, Azerbaijani President Ilham Aliyev had lambasted the Minsk Group co-chairs (Russia, France and the United States) in an unusually explicit manner for what he described as their ineffectiveness and alleged pro-Armenian bias (President.az, July 6).

In light of Yerevan’s request for assistance from the CSTO and Armenia’s reliance on its crucial strategic alliance with Russia, Turkey weighed in, despite Lavrov’s obscure warning. President Recep Tayyip Erdoğan stated, “[N]o doubt that this attack is an event that exceeds the caliber of Armenia”—an apparent allusion to Russia (Tccb.gov.tr, July 14). At a meeting of his cabinet, President Aliyev thanked Erdoğan, declaring, “[T]here are no other countries in the world as close to each other as Turkey and Azerbaijan” (President.az, July 15). Furthermore, in his same-day official letter to the Turkish head of state, Aliyev portrayed relations between the two countries as a “strategic alliance” (President.az, July 15).

On July 16, President Aliyev fired Foreign Minister Elmar Mammadyarov, publicly condemning his performance to communicate and defend Azerbaijan’s position internationally. Aliyev requested the newly appointed top diplomat, Foreign Minister Jeyhun Bayramov, to prioritize Azerbaijan’s relations with the United States, European Union and United Kingdom. Moreover, the president instructed Bayramov to immediately work on completing a new partnership agreement to upgrade relations with the EU. Strikingly, he did not mention Russia specifically, let alone the Russia-led Commonwealth of Independent States (of which, Azerbaijan is a member), Eurasian Economic Union or the CSTO. Instead, Aliyev seemed to couch any reference to the Russian Federation in general terms, under the loose category of neighboring countries (President.az, July 16, 2020; see EDM May 22, 2019). Simultaneously, two deputies of the Azerbaijani defense minister met with Turkey’s Minister of Defense Hulusi Akar, in Ankara (Msb.gov.tr, July 16). These developments do not signal Baku’s geopolitical drift or a sudden turn from maintaining good relations with Moscow. Rather, they implicitly convey Baku’s objection to Moscow and remind the latter that Azerbaijan has other options. Baku knows there are certain forces in Russia that favor a constructive approach to Azerbaijan. But at the same time, it understands that a long-term, overt war between Armenia and Azerbaijan would not be acceptable to Moscow (YouTube, Ednews.net, July 17).

Brief violent escalations in the Azerbaijani-Armenian conflict have routinely induced a scramble between Yerevan and Baku to win Russian support for their side (see EDM May 4, 2020 and March 24, 2017). Indeed, RT Editor-in-Chief Margarita Simonyan’s (who is of Armenian origin) open appeal to the Armenian government is a case in point. “After what you did, Russia has every moral right to spit on you and grind you up,” she wrote on her Facebook page. “But [Russia] would not do that. I am sure of it. It [Russia] will help this time, too,” Simonyan concluded. Other influential Armenians undersigned her appeal (Facebook.com, July 18).

A few weeks before the eruption of the latest border fighting, reports revealed apparent mistrust and tensions between Armenian Prime Minister Nikol Pashinyan and Defense Minister David Tonoyan, the author of Armenia’s Active Deterrence Doctrine. Tonoyan has strong connections to the Russian military establishment and is a graduate of the Military Academy of the Russian Defense Ministry (Turan.az, July 15; Golosarmenii.am, June 22). He is often characterized as “tactically” close to the North Atlantic Treaty Organization due to his previous experience as Yerevan’s official representative to NATO; yet, strategically, he remains a strong advocate of the alliance with Russia. Considering his profile, Tonoyan may, thus, be regarded as a potential replacement for Pashinyan in Moscow’s eyes. His often belligerent tone, combined with the battlefield death of an Azerbaijani major general during the recent border shelling—the first such high-level case in the recent history of the conflict—could give a boost to Tonoyan’s political weight domestically, especially in light of the Armenian population’s frustration over the April 2016 “Four-Day War.”

Tonoyan’s style, exemplified by his Active Deterrence Doctrine, conspicuously stands out in the latest clashes. Indeed, preemptive strikes and directing hostilities deep inside the rival’s (Azerbaijan’s) territory are central to the doctrine and reminiscent of NATO tactics. Strategically, the current violence, if allowed to spiral further, could draw Russia more explicitly into a conflict with Azerbaijan as well as distract international attention from Karabakh and surrounding occupied territories. It also serves to justify Russia’s military presence in Armenia and discredits calls from some in Pashinyan’s inner circle to expel it (Apn-spb.ru, July 22, 2018; Eadaily.com, July 31, 2018; Arminfo.info, November 13, 2018).

Meanwhile, many experts and observers have ignored significant nuances inherent in the choice of Tovuz province as the initial location of the recent clashes. Incidentally, Tovuz is part of what Luke Coffey, from the Washington-based Heritage Foundation, calls the “Ganja gap,” a “narrow 60-mile-wide chokepoint” through which major transnational oil and natural gas pipelines, fiber-optic cables, US and NATO troop resupply routes, railways and motorways extend, from Asia to Europe via Azerbaijan, Georgia, Turkey, and the Caspian and Back Seas, bypassing Russia (The Moscow Times, July 17; Heritage.org, May 29, 2018). On July 17, the Kremlin ordered massive snap military drills along Russia’s southern and western borders, including on the Caspian and Black seas (Mod.gov.az, July 18). All this serves as a subtle but assertive Russian invitation to Baku to join the CSTO so as to “neutralize” the threat that the bloc might respond against Azerbaijan, on Armenia’s side. However, Baku’s priority apparently remains retaining its non-alignment status while relying on Turkey in a worst-case scenario (see EDM October 30, 2019).

This article is written by Rahim Rahimov

This article is originally published in Eurasia Daily Monitor.