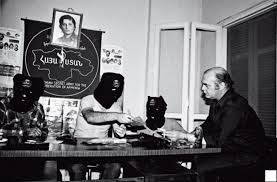 'Armenian Terror' is a scientific concept used for national identity at the international level and social massacres at the political and social level. The concept of "Armenian Terrorism" was first used by the US State Department in its monthly bulletin published in August 1982. The main reason for the emergence of the concept is that the parties formed on the basis of their ultra-nationalist thoughts included terrorism in their policies in order to achieve their goals, and as a result causing different terrorist incidents in the world in this direction. Hunchak party is known as the first Armenian terrorist organization in history. In their manifesto issued in 1888, the party underlines the need to use terrorism as an important tool in realizing its goals. Members of the Hunchak party begun to work with communists to develop their own framework of activity. In 1903, they assassinated the Tsar Russia’s Caucasian surrogate prince Grigory Sergeyevich Golitsyn, since they saw him as a serious obstacle to achieving their goals.

In 1890, another terrorist organization was created by the Armenians in the city of Tbilisi. The organization was known as the Dashnak Party. As it is known from the history, party members raided the Ottoman Bank in 1896. In 1905, they organized assassination of Ottoman Sultan Abdulhamid II. The dimensions of terrorism, for which the Dashnak party has adopted the basic principle from the first day, are not limited to this. At the same time, party members and members of the Hunchak party burned hundreds of villages in Anatolia, the Caucasia, and South Azerbaijan (Iran) from the early years of the XX century, and committed genocides against innocent people as well as robbery and theft.

Designed in party centers, these crimes against humanity were carried out by small terror groups. These small terror groups often raided Muslim and Jewish villages, committed genocides because of their religious and ethnicity, and massacred local people, children, and the elderly, sick and innocent people. The villages they usually raided consisted of Kurds, Turks, Lezgi, and Azerbaijani people. According to historian Tadeusz Swietochowski, who worked in the United States and studied Turkology, in 1905-1906 the terrorist groups consisting of Dashnak party members carried out genocide activities in 158 Azerbaijani villages. Meanwhile, 11 Silk Manufacturing Facilities were distributed in the city of Shusha. An Armenian historian named Simon Zavarian states that genocide against Azerbaijani people was committed in 43 villages in the Zangezur (Sisyan) region. In 1905, the assassination was carried out against Baku governor Nakashidze, who is known to have a positive interest in the Dashnak party. In 1915, raids were organized by members of the Hunchak and Dashnak parties on Turkish-Kurdish Muslim villages in Anatolia. During these terrorist incidents, Armenians committed genocides regardless of the elderly and children of the village people. According to historian Stanford Jay Shaw, in 1916, Armenians in Erzincan province took the lives of unarmed people without any difference, and committed genocide against them.

The Armenians, who aimed to establish the "Imaginary Great Armenia" state from sea to sea, took advantage of the significant strengthening of the communist party in Baku in 1918 and started to carry out terrorist and genocide activities in Baku, the capital of Azerbaijan and other big cities. These genocides are known as the March and Urmiya Genocides in the history pages. According to N.N. Kolesnikova, during the March Genocide, 12000 people were killed and 10000 people were captured and disappeared. Kajaznuni, the Armenian president of Ararat, at the same time declared Ararat independence for a small period in 1918-1920. Kolesnikova in his memoirs underlines that the Ararat state had also served in the realization of this genocide.

At the same time, the head of the Baku Sentro-Kaspi dictatorship underlines that Suren Shaumyan an Armenian ultranationalist, son of Stefan Shaumyan organized the March genocide and carried out Baku massacre against the Azerbaijanis. During this genocide, innocent people were killed by Armenian Dashnaks in the Guba province of Azerbaijan, and most of those whom were killed among them were Jews. At the same time, it was proved that the mass graveyard, which was found during a gassing process in 2007, was massively buried in Guba as a result of the genocide committed by the Armenians. In this mass cemetery, some people were buried with their bodies cut into pieces and among them 35 children were buried too. Similarly, in 1917, Armenian genocides were carried out in the city of Uremia and more than 190 thousands Muslims were killed between 1917-1918. Armenian terrorist groups were collecting money for their parties from different Armenian merchants, merchants or local people when they committed genocides against Azerbaijanis. Those who did not want to make these payments were blackmailed.

In the second period of the XX century, the basic character and action plan of Armenian Terrorism started to change. That is to say, more than 16 terrorist organizations, including the famous ASALA (Armenian Secret Army for the Liberation of Armenia) terrorist organization, started to operate in Austria, Livan, Russia, the USA and Sweden between 1972 and 2001. Members of these terrorist organizations were operating in developed and developing countries. Their terrorist activities were not one-sided. For example, on January 20, 1975, a bomb attack was carried out on the Bureau of the World Union of Churches in Beirut. On August 13, 1974, a bomb attack was carried out on France's Lyon railway station. They raided the French Embassy in Beirut on February 11, 1987. At the same time, in 1983, terrorist groups raided the British Embassy building in France. The explosive setup placed by Armenian terrorists in London on June 15, 1983 was found and destroyed. On the same date, terrorists carried out a terrorist activity at the Orly airport in France. A vast number of Turkish diplomats and embassy staff suffered and died from the ASALA terrorist attacks throughout the entire period of the activities of this terrorist organization.

In 1990, during the Karabakh war, these terrorist groups committed genocide against Azerbaijanis in Nagorno-Karabakh and Armenia. The "Khojaly Genocide", which is the biggest pain of the Nagorno-Karabakh wars, was taken place. This is not just a conflict and war between the two sides, it is a proof of how the thought and mentality of the 'Armenians' who have defined themselves as a 'nation' in human history is fed by blood. The peculiarity of their actions lies in the fact that they are aiming in extermination of innocent people, deliberately and unscrupulously taking lives of vulnerable and the weak, elderly, pregnant women, and small children, as a method of intimidating opponents. That is to say, 613 people were killed during the Khojaly Genocide in which 63 of them were children, 106 were women, and 70 were elderly. As a result of these relentless terrorist attempts by Armenian nationalism against humanity based on a blind mindset and for imaginary purposes, 10000 people were damaged, killed, chopped, suffered, lost their homes, and captured during the Karabakh war.

Nowadays, Armenians living in different parts of the world make regular aids and donations for the survival and existence of Armenian terrorist parties. They are also doing the same for their terrorist acts against Azerbaijan. In particular, under the leadership of Kim Kardashian, who has enough followers on social media, and through the Armenian diaspora, the aids are collected not only from the Armenians but also from different nations. Armenians continue their genocidal activities against innocent children and elderly people with the money of people living in different countries of the world who support "aid" activities only because they are misinformed.

Terrorism continues in the Caucasus, where the unfounded claims of the Armenians exist as a result of their wild thoughts that have no relation with reality, and where they somehow take refuge with political games. On September 27, 2020, Armenian soldiers started firing on the Azerbaijani-ruled villages of Fuzuli and Jabrayil. Over 70 civilians have been killed and over 300 civilians have been injured since the first day of the war until today. The Armenian state still continues its terrorist activities against Azerbaijan. The Karabakh war has been fired from Azerbaijan's Fuzuli, Agdam, Terter, Dashkasan, Aghjabadi , Goygol, Barda, Beylagan cities and aisle centers, towns and villages with large-scale weapons and rockets. Accordingly, unarmed civilians are killed. As a result of the throwing of the Elbrus (SCUD) rackets from the Armenian land to the city of Ganja at 2 a.m. on October 11, 2020, 11 people died, two of them were children, and up to 50 civilians were injured at different levels. Armenia carried out the same terrorist attack for the second time in the city of Ganja on October 17, 2020, and this time caused 15 deaths and 54 injuries, three of them were children. The majority of the injured and killed are women and children. Let us also mention that the city of Ganja is a city located at a distance of 100 km from the Armenia-Azerbaijan border line. Undoubtedly, this attack against civilians living in a city far from the war zone is considered as a terrorist act. These terrorist acts by Armenia against civilians gathered a serious reaction in the world and media institutions broadcasting at the international level shared extensive information on the subject.

'Armenian Terror' spreads its own brutality around it today, just as it causes pain and grief to remember to human being from the ancient pages of history. As long as the Armenian nation does not live in peace and brotherhood and subconsciously replace their evil thoughts with clean feelings, humanity will remember them in the future with grief, pain, and hatred. "The Armenians' problem is that they are thieves, stingy, eluding, irresponsible, fighting for no reason, unroyal, hypocritical, swearing and dirty heart," as Gabusname has told. What could be more embarrassing for a person and a nation than these characteristics and demeanor.