The international community should be thankful to Azerbaijan for implementing the UN's resolutions | Eurasia Diary - ednews.net 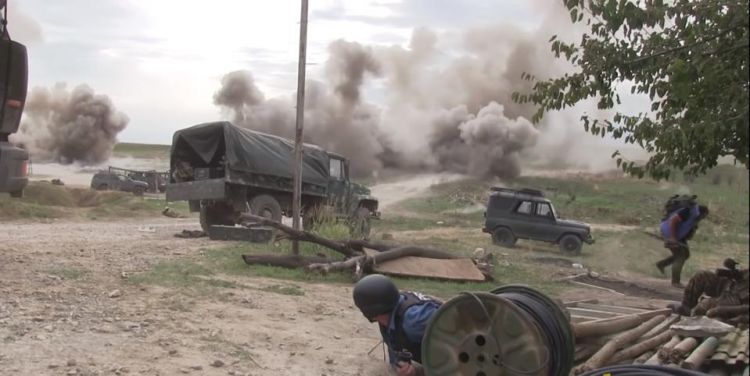 The Republic of Azerbaijan is geographically located at the crossroads of the political West and East. It has embraced the positive elements of various civilizations. This geographic location provides important advantages, as well as several security challenges. The most important and vivid example of such challenges for Azerbaijan is the aggression from the neighboring country of Armenia. As a result, Armenia has occupied a considerable portion of Azerbaijan, and approximately one million Azerbaijanis have been displaced or become refugees. In 1992 and 1993, the United Nations Security Council (UNSC) adopted four resolutions on the Nagorno Kara­bakh conflict. Each resolution confirmed Azerbaijan's territorial integrity to include Nagorno Kara­bakh and the seven surrounding districts (Lachin, Kelbajar, Agdam, Fizuli, Jebrayil, Qubatli, and Zangelan) and called for the withdrawal of all occupying Armenian forces from Azerbaijani territory.

The parties signed a cease-fire agreement in 1994, and the conflict has been "frozen" since then. The Minsk Group was established in 1992 within the framework of the Organization for Security and Co-operation in Europe (OSCE), aiming to play an arbitration role in the Nagorno Karabakh conflict resolution. The Minsk Group has 17 members, including Turkey, but only three - Russia, France, and the U.S. - hold co-chair positions (https://www.osce.org/minsk-group/108306). The Minsk Group's main objective was to solve the territorial conflict within a structural framework and promote a peaceful agreement. It also aimed to solve the refugee crisis in conflicting parts. However, Armenia never implemented UN resolutions.

To better understand Azerbaijan's current situation, there must also be attention directed at Azerbaijan's National Security Concept and Military Doctrine. According to the National Security Concept, the security environment of Azerbaijan is derived from a set of factors that affect the protection of their State sovereignty, territorial integrity, inviolability of borders, national interests, ensuring sustainable development, and values of the people and their prosperity. According to this document, protecting the independence and sovereignty of Azerbaijan, restoring its internationally recognized territorial integrity is the top priority (The National Security Concept of the Republic of Azerbaijan, Approved in May 2007, No. 2198). In June 2010, the Azerbaijani Parliament approved a military doctrine that identified the country's major threats. The doctrine served as a supplement to the concept of protecting the independence and sovereignty of Azerbaijan.

The doctrine also affirms that Azerbaijan will not start a military operation against any country unless it becomes the victim of aggression. If aggression is perceived, Azerbaijan has the right to use all necessary means to liberate its occupied territories (The Military Doctrine of the Republic of Azerbaijan, Approved on June 2010). Historically, armies have been raised and maintained to protect the territorial perimeter of the state. Armies have safeguarded political authority within that perimeter and, in many cases, served as agents of enforcement to impose order and secure local resources (U.S. Army War College: Department of National Security & Strategy, Academic Year 2020). For any country, the purpose of investing in military power is to accomplish political goals when diplomatic or any other forms of national power (DIME) efforts are exhausted.

The war in 1992-1994 has shown that for Armenia, the coercive threat is still relevant in achieving its political objectives. It is clear that Armenia’s political objectives are to expand its borders and territories. This country has territorial claims to Azerbaijan, Turkey, and Georgia. Armenia sees Russia's military presence on its Gyumri as a strong deterrent to Azerbaijan. Armenia is home to the largest foreign basing for Russian troops. As an expert on Eurasian security Alexandros Petersen has noted: “It is, of course, an open secret to all in the region as well as to Europeans that the Nagorno Karabakh dispute is a Russian proxy con­flict, maintained in simmering stasis by Russian arms sales to both sides so that Moscow can sus­tain leverage over Armenia, Azerbaijan and by its geographic proximity Georgia.” (Alexandros Petersen, “Russia Shows Its Hand on Karabakh,” EU Observer, November 8, 2013, http://euobserver.com/opinion/122032). In fact, Russia sells arms to Azerbaijan but gives it free to Armenia.

The rapid growth of the economy from 1995 has allowed Azerbaijan to finance a sustained military buildup against Armenia’s expansion policy. Azerbaijan has developed its armed forces into a professional, well trained, and mobile military. Azerbaijan has increased its defense forces significantly in recent years. Azerbaijan's defense forces consist of Land Forces, Air Force, Air Defense Force, Navy, and Associated forces. Associated forces include the National Guard, the Internal Troops, and the State Border Service, which can be involved in state defense. There is also 300,000 former service personnel who have had military service in the last 15 years (https://en.wikipedia.org/wiki/Azerbaijani_Armed_Forces).

Azerbaijan's current military budget exceeds Armenia's entire national budget. In 2019, Global Firepower ranked Azerbaijan 52nd and Armenia 96th among 137 countries for its military strength (https://www.globalfirepower.com/countries-listing.asp). According to military experts, this is the best performance among the countries of South Caucasus. Therefore, Armenia’s political and military leaders’ claim on Azerbaijan for using Turkish, Syrian, and Pakistani mercenaries are an outrageous lie. Unlike the Armenian Army, today Azerbaijan Army conducting a war of 5th generation with high-tech weapons and rapid maneuvering.

For almost three decades, the Republic of Azerbaijan has shown political endurance and never show disbelief to mediators. The people of the Republic of Azerbaijan believed that the mediators and international community someday would have pressure on Armenia to implement the UN resolutions and respect Azerbaijan’s territorial integrity. However, in April 2016 and July 2020, the armed forces of the Republic of Armenia attempted to extend its occupation. Moreover, in August 2019, the Prime Minister of Armenia stated that Karabakh would never return to Azerbaijan. All these activities, and particularly the Prime Minister’s statement, caused the escalation in the region. It was obvious that Armenia’s occupation forces will not leave occupied territories. The mediators and international community's silence and not having any instrument of power to force Armenia’s current political leadership to implement the UN resolutions did not leave any hope to Azerbaijan to overcome the threats from and to influence Armenia. Unfortunately, all mediators’ sympathy lie with Arme­nia. They act like not mediators but participants in the conflict.

In fact, Armenian separatism and occupation of Azerbaijan’s internationally recognized territories presented a real threat to Azerbaijan's independence. The resolutions adopted by international organizations, particularly by the UN, on this conflict are critical, as it was one of the main sources of international law. The President of the Republic of Azerbaijan very often raised international awareness of the fragility of the unfavorable status quo. Called the mediators and international community put the pressure on Armenia to be constructive at the negotiating table. Therefore, Azerbaijan took it to its own hands to implement the UN’s resolutions. As the President of the Republic of Azerbaijan, Mr. Ilham Aliyev, stated recently, no one can prevent us from fulfilling the UN’s resolutions, and Azerbaijan is on the right path. We will put an end to this occupation.  At this point, seems the military solution is only tool to force Armenian political and military leadership to fulfill the resolutions of UN as main sources of international law.