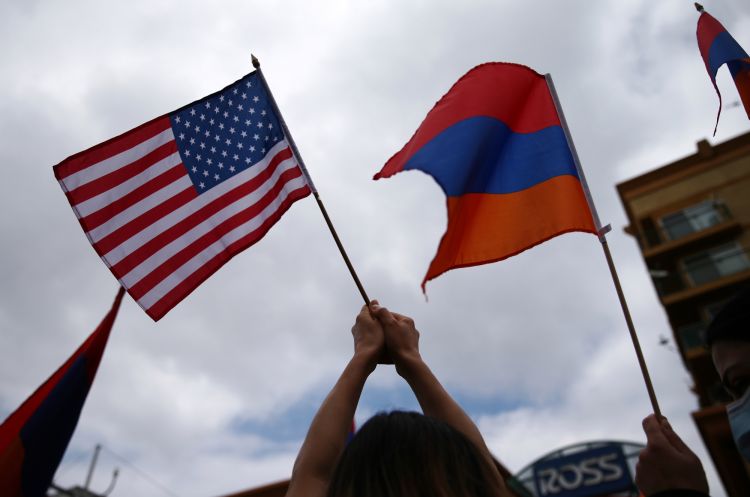 President Joseph Biden is the first US president to formally refer to the atrocities committed against Armenians 106 years ago, carried out by the Ottoman Empire, as a ‘genocide.’
The problem with this Biden decision is that it doesn’t meet the agreed definition of genocide.
Turkey is not happy; this recognition could cause an increase in tensions with Turkey, a longtime US and NATO ally.
The late Bernard Lewis, a most respected British-American historian, specialized in Oriental studies disagreed with the categorization. Lewis, known as a public intellectual and political commentator and former Cleveland E. Dodge Professor Emeritus of Near Eastern Studies at Princeton University, clearly stated his case against it.
In this video taken at the National Press Club in Washington, D.C. on 3/25/2002, Lewis speaks clearly and astutely on the Armenian genocide allegations that Biden just conceded to.
Professor Lewis on the Armenia Genocide Question
“It is a question of definition. The term genocide is used loosely now, in some cases where there is no bloodshed at all.”
“In this particular case, the point made of the massacre of the Armenians in the Ottoman Empire was the case of what happened to the Jews in Nazi Germany.”
“And that is downright falsehood.”
“What happened to the Armenians was the result of a massive Armenian armed rebellion against the Turks, which began even before all broke out and continued on a larger scale. A great number of Armenians, including members of the armed forces who deserted across the frontline, joined the Russian forces invading Turkey.”
“Armenian rebels actually seized the Turkish city of Van and held it for a while, intending to hand it over to the Russian invaders. There was guerilla warfare all over the Turkish region of Anatolia. And this was, what we now refer to as a ‘national liberation movement’ of the Armenians against Turkey. The Turks resorted to very ferocious measures in repelling it.”
“There is clear evidence of the Turkish government decision to deport the Armenia population from the sensitive areas, which meant the entire Anatolia, not including other provinces that were still part of the Ottoman Empire.”
“There is no evidence of a Turkish decision to massacre. On the contrary, there is considerable evidence of attempts to prevent such acts, which were not very successful.”
“Yes, there were tremendous massacres, the numbers are very uncertain, a million may well be. The massacres were carried out by irregulars, by local villagers responding to what had been done to them, and a number of other ways.”
Sloppily labeling that mass killing of Armenians as genocide, which is defined as a calculated slaughter of a huge number of people, is incorrect. Do Mr. Biden or his administration have another agenda concealed in the decision to recognize the killing of Armenians by The Turks as genocide? 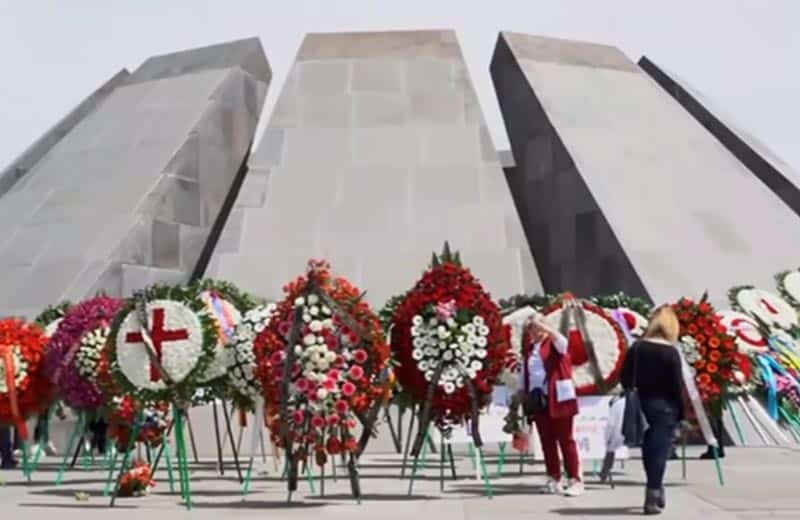 Armenian Secret Army for the Liberation of Armenia
Armenian Secret Army for the Liberation of Armenia was terror pressure that Biden and his administration either know nothing about or ignore it.
The Armenian Secret Army for the Liberation of Armenia (ASALA), a Marxist militant organization, was founded in 1975 in Beirut, Lebanon. The organization’s leader was Hagop Hagopian who passed away in 1988. It was a group consisting of Armenian militants, primarily from the Middle East, who from 1975 to 1994 committed more than 110 terrorist attacks in 21 countries that killed 77 people.
There was no evidence that the Ottoman Empire intended to kill off the entire Armenian nation.
ASALA’s stated goal was to compel the Turkish Government to publicly acknowledge its responsibility for what they called the Armenian Genocide in 1915. They wanted Turkey to pay reparations to Armenia, and cede territory for an Armenian homeland.
Armenians are not at all an innocent party on two fronts: Azerbaijan’s Khojaly Massacre and the Holocaust.
Khojaly Massacre, February 26, 1992
On 26 February 1992, amidst the height of the Armenian invasion of Azerbaijan’s territory and the beginning of the Nagorno-Karabakh war, the town of Khojaly was attacked by Armenian forces, backed by the 366th CIS regiment Russian soldiers. As they tried to escape Khojaly, 613 ethnic Azerbaijani city resident-civilians, possibly as many as 1,000, were brutally massacred. The numbers included women, children, and elderly. The Human Rights Watch called it “the largest massacre in the conflict” between Armenia and Azerbaijan.
The Armenians justified their invasion of Azerbaijan, and the killing of Azerbaijanis that ensued, by Armenia’s 27-year illegal occupation of the Nagorno-Karabakh region and 7 adjacent districts as “a national liberation movement.”
California-Armenian Legislative Caucus
Shockingly, members of the California-Armenian Legislative Caucus have been running a massacre denial campaign, to deny that the Khojaly Massacre ever happened.
The Caucus members have circulated a “Dear colleague” letter in which they ask others to join them in denying one of the worst massacres in recent times. One can question if this massacre could implicate Armenia in war crimes. It has already been thoroughly investigated and established by the United Nations and the European Court of Human Rights.
The letter however reframes the war that the entire international community blames solely on Armenia took place solely on Azerbaijan’s land. That has been thoroughly documented by international observers, courts and many democratic nations.
The tragic massacre of innocent Azerbaijanis was never fairly dealt with by the International community. 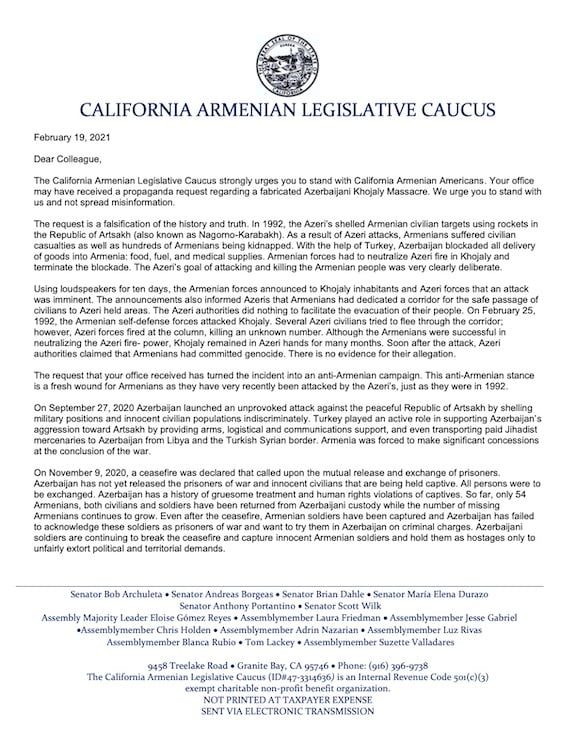 Anther Aspect Armenia Must Well Ponder
For the past two centuries, Armenia agreed to be used by the world powers against Turkey and Azerbaijan. The collaborating parties must ask themselves how much longer this situation can be sustained. Because sooner or later, Armenia will need to normalize relations with its neighbors if the country wants to survive as an independent nation.
The Armenians’ Holocaust Comparison
All too often, Armenians will refer to the deportation of their ancestors from Turkey and the killing that took place, as comparable to the Holocaust, to what happened to the Jews of Germany in WW2.
Professor Lewis Continues
“But to make this [Armenians killed by the Turks] a parallel with the Holocaust in Germany you will have to assume that the Jews in Germany had been engaged in armed rebellion against the German state, collaborating with the allies against Germany, and in the deportation order the cities of Hamburg and Berlin were exempted; the persons in the employment of the state were exempted and the deportation only applied to the Jews of Germany proper so when they got to Poland they would be welcome and sheltered by the Polish Jews.
“That seems to be rather an absurd parallel.”
Nazi Sympathizers
Armenians were known to be Nazi sympathizers/collaborators. The Armenian Legion, also known as a military unit in the German Army during World War II, fought side by side with Nazi Germany.
Just as the Holocaust is a very dark blemish in mankind’s history, the Khojaly Massacre is a very painful bruise in Azerbaijanis’ collective memory and a disgraceful mark on the nature and reputation of Armenia.
Yes, Armenians were killed in large number by the Turks. But much of the killings were induced and the result of the behavior of the Armenians agitators-rebels and their previous hostility and cruelty towards the local Turks.
Armenian Lobby Wants the World to Follow Biden
There are more Armenian people living outside Armenia than within the country’s border. Over the years these expatriates formed a very strong lobby, often using heavy pressure.
Because the powerful Armenian lobby has been pushing its false narrative everywhere, for decades, this ill-considered ‘genocide’ declaration is now being picked up by others around the world.
In Australia, Sky News host Rita Panahi already expressed the idea that Australia must follow the US lead and recognize the genocide too.
Joseph Biden just gave the United States’ seal of approval to a ‘genocide’ that cannot be officially proven, because it fails to meet the definition of genocide. Only the Armenians claim it.
Knowing what is known about Joseph Biden’s current inability to string sentences together, it seems unlikely he made the decision to put this matter forward and approve it for action.