Mine map: blackmail for mediators, threat to regional security - Commentary 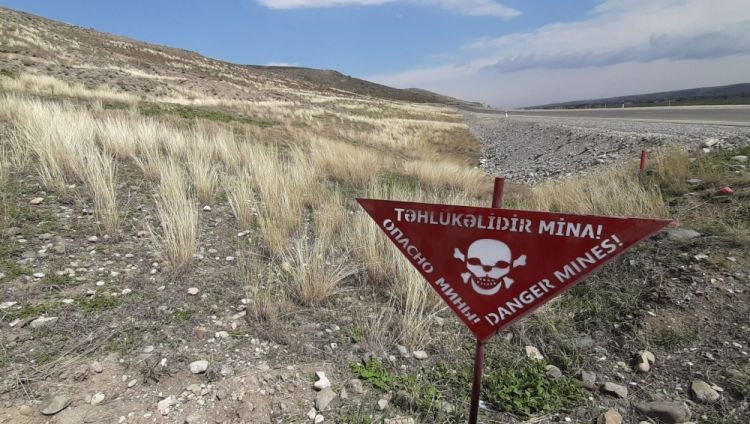 Article was written by Sadraddin Ismayilov

Official Baku has handed over 15 prisoners of war to Yerevan, while Armenia has provided Azerbaijan with a map of 97,000 anti-tank and anti-personnel mines buried in the Aghdam district.

Although it was an essential step to build trust between the parties after November 10, unfortunately, Armenia again prevents this relationship. Acting Prime Minister of Armenia Nikol Pashinyan said that Yerevan gave a small piece of the map of minefields: "I can not say that it is an important part, but it is a small piece."

Why did the Armenian government submit the map seven months after the signature of the ceasefire statement? Relatives of missing service members of the Armenian army occupying Azerbaijani lands have been protesting for months. The government makes promises to them by showing various reasons. On June 20, Armenia will hold early parliamentary elections. According to opinion polls, Nikol Pashinyan's popularity has been declining in recent days. He is slightly behind his main rival Robert Kocharyan in public opinion. Pashinyan may consider it beneficial to release prisoners in exchange for a map to improve public opinion during the election campaign further. In other words, Pashinyan uses it to increase his authority. His statement contradicts a statement made by Armenian officials for several months. At that time, the country's Foreign Ministry said that there was no such a map in Armenia.

Meanwhile, a charity called HALO Trust, also financially supported by France, was involved in clearing the occupied territories of mines. This organization has operated in the occupied territories for more than 20 years. Head of USAID Yerevan office Karen Hilliard in Yerevan said in October 2014 that the Armenian-occupied Nagorno-Karabakh region of Azerbaijan would be cleared of mines by 2016. According to her, 251 different areas have been demined since 2000: "Since 1995, 345 people have been killed. At present, only 5 percent of the area remains uncleared. "After HALO Trust allocates $ 5 million for this project, the territory of Nagorno-Karabakh will be completely cleared of mines by 2016." However, demining of the lands was not completed. Even Armenia took advantage of the deadline and mined the territories. In this regard, Pashinyan's speech, the activities of the OSCE Office in Yerevan, and the "demining" of the HALO Trust suggest that along with official Yerevan, these two organizations and those behind them are aware of the territories mined by the occupiers in Karabakh. In other words, those who helped the occupation of Azerbaijani lands by Armenia also turn a blind eye to Armenia's refusal to provide a map of those mined areas, thereby supporting the movement of Armenians. Pashinyan's statement means that Armenia still possesses a part of the map of mined territories.

Who has the rest of the map? We can also assume that Nikol Pashinyan is blackmailing Armenia's supporters by pretending to reveal who has the rest of the map if they do not support him in the elections. By this statement, the Prime Minister also acknowledged the existence of such a map. Now it is the turn of international mediators. It is time to put pressure on official Yerevan to provide Azerbaijan with a map of the mined areas. It would also be in line with their mission. The mediators can take advantage of the situation to gain Azerbaijan's trust by achieving this direction. Otherwise, they will be responsible for mine explosions.

Finally, the fact that Armenia still has the map is not only a source of danger for the citizens of Azerbaijan. Armenia also threatens regional security and cooperation, hindering the building of trust between the forces interested in the region. It is also detrimental to the well-being of the Armenian community. These mines can cause a social explosion in Armenia.