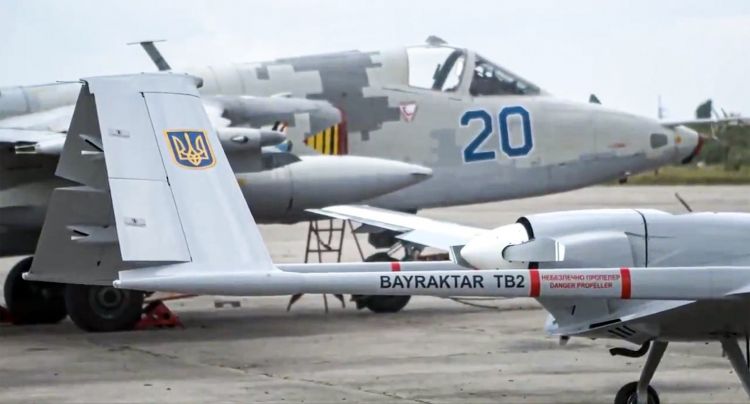 The relations between Washington and Kiev in terms of Ukraine's NATO membership remains under question. While Ukraine try to get rid of Russia's leverages it is important for her to integrate to NATO as soon as possible. The United States, which has lost its credibility, this time broke its promise by postponing the NATO issue under the pretext of closer cooperation with the EU. However, at the last meeting between Biden and Zelensky, the United States made great promises on Ukraine's membership in NATO. However, after Biden's cold replies, Ukraine's dream of becoming a member of NATO failed. Moreover, the European Union partners that recenty expressed their preference in Russian gas turned their faces away.
Nevertheless, Ukraine is working hard to improve its military capacity. The Ukrainian government, frustrated in many places, anticipated all this in advance and turned to its reliable neighbour, Turkey.
This week, the Ukrainian armed forces announced that they would receive 24 new Bayraktar TB2 drones from Turkey. Ukraine is working to improve the use of military weapons, including "Bayraktar".
At present, Ukraine has 12 Bayraktar TB2 anti-aircraft missiles. Also in July this year, the Ukrainian Navy ordered another batch of UAVs from Turkey. The statement came from Commander of the Ukrainian Armed Forces Valeriy Zaluzhny. He also noted that these drones will be used even domestically, and therefore more "Bayraktar" will be ordered in the future. It is clear from the words of the Army Commander that Ukraine has begun serious preparations not only for the enemy from abroad, but also for double defence inside the country.
Another interesting point is that, today the Minister of Defence of Ukraine Andriy Taran met with Haluk Bayraktar, the Director General of the Turkish company Baykar Makina. This was reported citing the Ukrain's Ministry of Defence. The meeting discussed the implementation of previously reached agreements, as well as the possibility and prospects of locating the production of Turkish Bayraktar TB2 systems in Ukraine.
Bayraktar's ability to win the sympathy of the Ukrainian side has resonated around the world. In particular, the statement of Turkish President Recep Tayyip Erdogan that "Bayraktar" will soon become the number one in the world aroused serious interest.
Speaking to EDNews, military expert Adalat Verdiyev first commented on the recent talks between the United States and Ukraine regarding to integration in NATO and its results.
"Ukraine is not expected to refuse or withdraw from cooperation with the United States in the light of what is happening," he said. Ukraine is already taking steps to join NATO and is expected to continue to do so. Faced with the Russian threat, Ukraine cannot give up the US and NATO support. Furthermore, in prallel, Ukraine is extremely interested in acquiring weapons used in the wars in the region, such as Iraq, Syria and Karabakh. I believe that within the framework of these interests, including in the military and military-technical spheres, Ukraine's cooperation with Turkey will be further expanded.
The expert also commented on the recent interest of the Ukrainian side in the Turkish "Bayraktar TB2" air defence systems and the form in which it supplies its army.
Ukraine has previously acquired Turkish Bayraktar TB2 drones. Apparently, the Ukrainian side was completely satisfied with the Bayraktar anti-aircraft missiles, which took a worthy place in the world arms market due to their technical features and unique capabilities during the war.
As for the use of these UAVs, the fact that Ukraine is in a state of conflict with Russia, both at sea and on land, necessitates their acquisition. The Ukrainian side is well aware that it has to improve its defence system, not only on water and land, but also in the air.
The military expert commented on the recent statement made by Turkish President Recep Tayyip Erdogan that the Bayraktar TB2s will soon become the number one drones in the world.
"President Erdogan's remarks are not an exaggeration. Because it is an undeniable fact that the damage inflicted by the Bayraktar UAVs to the tank reserves of the Armenian army was more than one billion dollars. This is not only damage to tanks, but also the destruction of Armenian personnel, artillery, mortars and other military combat vehicles by UAVs.
In addition, Bayraktar has other advantages over other UAVs in terms of the type of strike. For example, during the war, we used Israeli combat "Harop". The disadvantage of these UAVs was that they were designed to hit the target by destroying itself. The Bayraktar can take off carrying four MAM-L missiles in the air and can return to the base several times to reload after using them.
By Elnur Enveroglu