California "Artsakh" Republic or the Armenian goddess Mrs Tracy - Will the US give them status? | Eurasia Diary - ednews.net

California "Artsakh" Republic or the Armenian goddess Mrs Tracy - Will the US give them status? 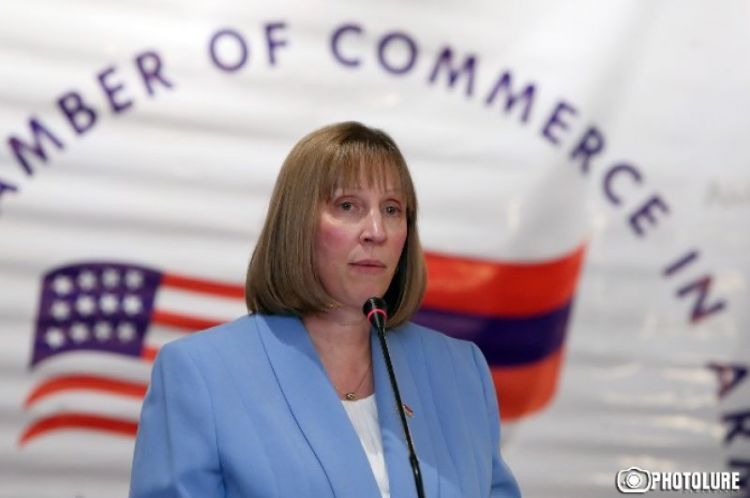 The never-ending adventures of the United States continue in Karabakh. So all attentions focus on the recent statment of Mrs Lynne Tracy, the US Ambassador to the Republic of Armenia.

"The US policy on Karabakh is as follows: We are convinced that the status of Karabakh must be resolved, the conflict has not yet been resolved. One of the interests is territorial integrity. But the right of the people of Nagorno-Karabakh to self-determination remains one of the main principles and it cannot be denied."

It should be noted that this is not the first such statement by the ambassador. "Of course, thirty years of conflict and tension cannot be resolved overnight," Tracy said. But there are fundamental points that are important for us. We do not think that the status of Nagorno-Karabakh has been resolved. It remains on the agenda of the Minsk Group," she said. Roughly speaking, by using this expression, the diplomat blatantly disrespected the territorial integrity of Azerbaijan.

Nevertheless, Ambassador Tracy was responded last week by the Azerbaijani Foreign Ministry, and by the relevant order of Azerbaijani President Ilham Aliyev, it was clearly stated that the Karabakh and Zangazur economic regions were established in the place of Nagorno-Karabakh and these territories belong to Azerbaijan.
However, this answer does not seem to have been very effective for Lynne Tracy, who keeps blabbing about her status.
However, Mrs. Tracy must understand that the United States is one of the last countries to take a stand on the Karabakh issue. Why? For 28 years, the United States, the co-chair of the Minsk Group, has not reacted seriously to Armenia, which has occupied Azerbaijani lands, and has not contributed to the achievement of final peace.
In the 1990s, the United States, one of the global powers in the world, did not budge to stop the bloodshed in Karabakh and end the occupation. If official Washington intervened in the process and put an end to the Armenian occupation, if it helped the withdrawal of Armenian troops from all our occupied regions, including Kalbajar, Lachin, Shusha and Khojaly, perhaps today (or yesterday) we would “at least give to poor Armenians” to grant the status of an autonomous province ”.
Unfortunately, this did not happen. On the contrary, the United States adopted the "907th Amendment" in 1992, which barred any assistance to Azerbaijan, which was facing occupation and terrorism. And guess who was at the forefront of politicians who were especially zealous in adopting this amendment and opposed its repeal?! Incumbent US President Joe Biden. Biden went down in history as the second president after Ronald Reagan to declare recognition of the Armenian genocide. Biden said that his Democratic Party is supported by the Armenian lobby in all elections. In our opinion, the issue is already clear, the source of the "status" of the US Ambassador to Armenia Tracy is also known ...
Let's move on to the issue of self-determination of nations. Mrs. Tracy acts as an ardent advocate of this principle. To be honest, Azerbaijan has never been against this principle and cannot be. Because the Azerbaijan Democratic Republic declared its independence to the world with reference to this principle. However, the self-determination of peoples does not mean the creation of an independent state by any people in any country, nor does international law allow it. Thus, if there is a principle of self-determination of peoples, there is also the principle of "Uti-possidetis". This principle is a norm of international law, which includes the recognition of the territories owned by states at the time of declaration of independence as their property. That is, the territories owned by Azerbaijan when declaring its independence are considered its territory according to international law. That is why the whole world, including the United States, has been refusing to recognize the independence of the so-called regime for 28 years.
Yes, if Ms. Tracy passionately supports the self-determination of peoples, let her join the separatist group "Yes California" in California, USA. Let there be no more status disputes for Armenians in our land. That is, let him see the light in his own eyes!
The number of supporters of independence in California has risen sharply over the past 20 years. In particular, a group called Yes California, which became active after the election of Donald Trump as President of the United States, launched a major campaign in 2016 to declare California's secession from the United States and its independence. One of the leaders of the group, Luis Marinelli, said that if California declares independence, it will have the sixth largest economy in the world and can become a member of the G-7, like France.
California has a population of 39 million and an area of ​​423,000 square meters. And most importantly, according to the latest polls, 33% of Californians have left the United States and strive to gain independence.
In short, we expect that Mrs.Tracy will leave for California as soon as her diplomatic mission ends and join the separatist movement. By the way, there are many Armenians in California. Perhaps the ambassador will decide to give a status to Armenians there as üell as taking 25,000 Armenians in Karabakh to California. In this regard, we should not call Mrs.Tracy a "gossip diplomat", but an "Armenian goddess Tracy"...
By Nijat Ismayilov