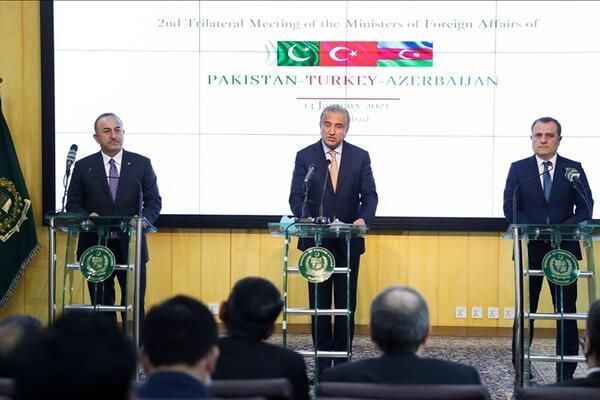 Strong desire of business communities, constant political consultations and rigorous commercial diplomacy among Pakistan, Azerbaijan and Turkey have now initiated an innovative mean of regional connectivity and the first consignment of National Logistic Cell (NLC) left Pak­is­­tan for Turkey and Azer­baijan through Iran.

The Ministry of Commerce said the National Logistics Cell (NLC) trucks left with a consignment for Turkey and Azerbaijan via Iran under the Transports Internationaux Routiers (TIR) convention on September 24, 2021.

The National Logistic Cell (NLC) started its operations under the Tran­sports Internationaux Rou­tiers (TIR) Convention. In this context, the NLC is the second operator in Pakistan, and the first in public sector, to begin its operations under TIR. TIR operation will allow cargo to cross borders and move along trade routes with reduced procedural barriers.

It is indeed beginning of new era in the economics of trilateral brotherhood which will be beneficial for all the strategic partners. Pakistan, Azerbaijan and Turkey have already established trilateral dialogue formation which will be further strengthened after successful completion of this innovative supply of goods through TIR.

In addition to this, the NLC was awarded the TIR licence by Pakistan National Authorisation Committee (PNAC) of the International Transport Union (IRU), which administers the TIR Convention internationally.

According to adviser on Commerce and Investment Razak Dawood “The vision of the Ministry of Commerce is ‘Connectivity through Trucking’ and as a policy the government will support the private sector in this regard. He termed it milestone which would enhance regional trade and connectivity and complement the Silk Route Reconnect policy.

He further informed that one private sector company already has the license to operate under the TIR, while many private companies were also applying to get the permission to do so. The advisor shared the vision of the ministry of commerce based on connectivity through trucking in which the government would support private sector.

The NLC has initially started its transportation operations with Turkey and Azerbaijan, later it would be extended to other countries in the region, he further added.

It hopes that it will definitely create new opportunities for Pakistan's services sector, especially the logistics companies, due to the international trade traffic which will depend on Pakistan's geographical comparative access. Consequently, it will transform the country into a connect hub/transit and transshipment center and will attract more and more investments in Pakistan’s logistics sector and associated services.

The TIR is a highly secure international Customs transit system for goods’ international movement across frontiers of member countries which enable intermodal transportation with minimum interference, hence facilitating free flow of goods at competitive transport costs and with minimal physical inspection of goods.

Moreover, it is based on TIR Carnet, which is a document issued under TIR for sealed road transport for each shipment enabling it to reach the destination country without customs inspection.

The NLC was awarded the TIR license by Pakistan National Authorization Committee (PNAC) of the International Transport Union (IRU), which administers the TIR Convention internationally.

The NLC chalks out a comprehensive plan to integrate logistics services to potential traders by bypassing lengthy and complex bureaucratic processes involved in navigating sea routes. Due to which delivery time from Pakistan (Karachi) to Turkey will be reduced to 8 to 10 days as compared to the 27 to 48 days it takes for cargo shipment delivery via sea routes. This integrated transportation system is initially targeted at Turkey, Azerbaijan, and Turkmenistan, but is designed to be extended to other Central Asian countries.

According to SBP latest report (August 2021) Pakistan’s trade deficit increased 120 percent year-over-year in the first two months of FY 2022, as imports surged by 73 percent to $12.1 billion. However, its exports increased by 28 percent year-over-year to $4.6 billion in July and August, and slipped by 4.5 percent on a monthly basis. It hopes that successful execution of TIR trilateral Cargo trade will further increase Pakistan’s exports in the days to come.

Being prominent regional expert of Central Asia & South Caucasus the start of TIR Cargo trade among Pakistan, Azerbaijan and Turkey is the validation of the vision of leadership of these brotherly countries to achieve dreams of greater regional connectivity. Now in collaboration with NLC Pakistan it succeeded in its first pilot shipment to Azerbaijan and Turkey under the Transports Internationaux Routiers (TIR) Convention.

It is indeed a great step in Pakistan’s transit trade history as Pakistan Customs processed the first-ever TIR consignment which has multiplier socio-economic effects. It has further increased connectivity with trading partners which is vital for viable trade relations and sustainable economic ties among the three strategic partners.

The successful start of TIR has been Pakistan’s long-term vision for trade and economic relations with neighboring countries including Afghanistan, Uzbekistan and Central Asian Republics (CARs), Azerbaijan and Turkey which has now transformed Pakistan as a hub for trade, transit and transshipment. The structure and efficient connectivity networks of all the participatory countries play a vital role in access to markets and should be considered an important attribute for the trade competitiveness.

To conclude for the further strengthening of trilateral economic ties, business befitting propositions and trilateral trade relations in diverse sectors of economy, trade & commerce, joint venture, FDIs, infrastructural development, education, tourism and last but not least, security and defense cooperation the leaders of Pakistan, Azerbaijan and Turkey should further focus on more innovative means to foster economic ties in the days to come.

This article was written by DR Mehmood Ul Hassan Khan, a professional researcher and expert on the region studies, especially the Middle East, Caucasus, Central Asia, Afghanistan and Eastern Asia.