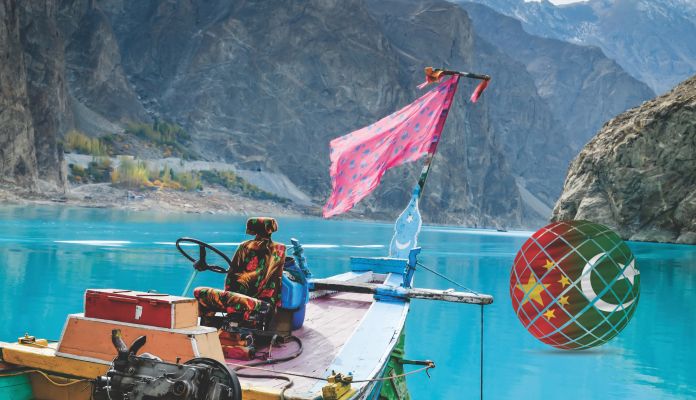 China-Pakistan Economic Corridor (CPEC) is rapidly developing the infrastructure of Pakistan and is strengthening even the domestic economy of Gilgit-Baltistan (GB). It is the window of CPEC which may be economically further benefitted and socially connected because of numerous ongoing projects.

The GB has a very important geo-strategic location as it shares borders with three neighboring countries: India, China and Afghanistan. Consequently, CPEC will connect the entire region with Gwadar seaport which will eventually make Gilgit an international trade hub which would support as well as the local industries. Thus future socio-economic transformation of the GB is directly correlated with the development and expansion of CPEC.

According to Asian Development Bank (ADB) the GB produces tons of organic apples, cherries and apricots, if these are exported to China, which is a huge international market, the profits of the local agro-industry will double and thus the economy of Pakistan will further improve.

Similarly, according to reports (2021) of the GB government the research conducted by national and international organizations have clearly indicated that the land of Gilgit is enriched with various minerals which involve metallic and non-metallic minerals as well as energy minerals, such as gold, gypsum, uranium, marble and feldspar, etc. These minerals too can be exported to China which would further boost the economic growth of the area.

The revival of Diamer Bhasha Dam, located on Indus River in GB which is part of CPEC phase-II is set to produce 4500 MW of energy as well as act as a huge reservoir of water. The ADB (2020-2021) has also stated that Gilgit has the potential to produce about 50,000 MW of energy due to its infinite water resources. Just the Bunji Dam located on the Indus River in Bunji, Gilgit in which ADB has already invested is producing 7100 MW of energy. Investing in these hydropower projects in Gilgit would not only solve Pakistan’s energy crisis but also could be sold to neighboring countries. Thus the role of CPEC is imperative for the overall energy production of the country in which the GB would play a very important role in the days to come.

Fortunately, successive federal governments have been diligently working for the provision of internet services or “digital roads” in the GB area. In this connection, earlier this year, the Pakistan government decided to launch high speed internet 4G broadband services in GB. This would not only generate revenue for the government but would also be essential in promoting tourism of the area.

In this context, Prime Minister Imran Khan said that the provision of internet services and connectivity in Gilgit-Baltistan is crucial for capping the true potential of the youth. Thus numerous projects of the CPEC in GB would be game and fate changers for the youth and instrumental for creating new jobs. It will help the youth in getting education online, as education has been halted by the pandemic Covid-19. Not only this but 3G and 4G high speed internet services will also trigger a wave of digital entrepreneurship in Gilgit which would reduce the large scale unemployment in the region. Ultimately it will further enhance the chances of e-commerce in the GB.

In addition to this the government has already increased the budgetary allocations more than 25% for the GB which shows its strong commitment for achieving the greater socio-economic integration and regional connectivity in the GB which comprises 73,000 square Kilometer which is a mountaineer’s paradise and is home to world’s second highest peak K2 and the Nanga Parbat has a huge tourism potential but due to lack of basic infrastructure and underdeveloped service facilities in the GB are hurting the capitalization of true tourism potential of this region. The government of Pakistan along with the government of GB is working together in order to overcome these issues. Hopefully with the ideal collaboration of public and private sector facilities will be developed and streamlined because of various ongoing projects of CPEC.

The GB government has contacted private investors to make five-star hotels in the area and construction of three five-star hotels has already been announced. This would create employment opportunities for the local people and the amount of local and international tourists visiting the area will also increase. This would benefit the local industries as well as improve the local economy.

Time and again, Prime Minister Imran Khan speaks highly of the tourism potential of the region and is also hopeful that complete exploitation of the potential could pull Pakistan out of the financial crisis.

To conclude, it is suggested that more projects of CPEC should be included in terms of micro-dams, SMEs, special economic zones, agro-industry, health and last but not the least, infrastructure development  from the GB which would change the landscape of this region. GB is located in the north-eastern part of Pakistan and is renowned for its famous snow-capped mountainous ranges, splendorous valleys, bio-diverse wildlife, high altitude forest rivers and its exotic culture which should be further explored and tapped under the flagship project of CPEC phase-II. In this connection, more projects of road, highways and super highways should also be included in the CPEC phase-II which will ultimately further strengthen its tourism potential, agro-industry, SMEs, regional connectivity, handcrafts & cottage industries, non-traditional exports of precious stones and marbles to Chin and beyond.

Unfortunately, poor infrastructure and lack of connectivity of the GB is now posing serious socio-economic alienation which should be rectified through the help of CPEC projects in the region. In this connection, the federal government along with the government of Gilgit-Baltistan are rigorously taking meaningful initiatives  to provide it with financial autonomy and with freedom to work on the infrastructural interventions as per requirements of the province which would not only stimulate the economy of Pakistan but also improve the standard of living  of the locals in which CPEC would play an important role in the days to come.

The CPEC is transforming Gilgit-Baltistan. The region hosts several beautiful valleys including Nagar, Hunza, Gilgit, Attaabad, Khaplu, Shiger, Gupis, Astore and Skardu Valley thus attracts the local and foreign tourists in the summer season which should be developed and tapped under the umbrella of CPEC.

CPEC is also making investment in road and railway networks of the GB that will connect the region with the rest of the country. Under CPEC, the Karakoram Highway will be improved and a few new roads will be built. Construction of some new tunnels and bridges has already been completed.

A railway track is also expected to be constructed connecting the Kashgar city of China to Havelian of Pakistan. Similarly, work on Gilgit-Baltistan Expressway, Havelian-Thakot Motorway, Shonter-Astore Road, Gilgit-Shandur Road, and Chitral-Chakdara Road is near to completion. The improved connectivity through this transportation infrastructure will contribute to the social and economic well-being of the local people.