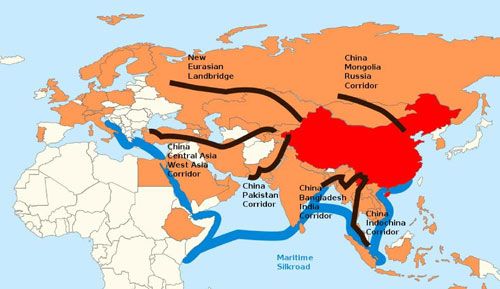 In this regard, the Chinese One Belt, One Road Initiative (BRI) being the project of the century has been further transformed into green.

Thus green is the means of human survival, safe productive channels and a befitting proposition for the protection of the ecological environment in the days to come.

Most of the participating countries of the BRI are developing countries and emerging economies which badly need a comprehensive policy and holistic approach for sustainable economic development through green mode of production and growth alike.

According to the latest data (December 2021), these countries account for 31 percent of the global GDP, but constitute about 62pc of the world’s population due to which their ecological environments and biodiversity are very fragile.

Unfortunately, 58 percent of the world’s deserts are also concentrated in the connecting areas of the BRI.

BRI is the modern replica of the ancient historical Silk Road which had been famous for its international transmission channel for dust and pollutants.

Even before inclusion to BRI, balancing environmental protection and economic development was a persistent challenge for these countries.

So it is inevitable and necessary for China to transform the development model of “polluting first and then treating” to “developing while treating through various holistic policies to reduce levels of climate change in these countries.

In this connection, environmental protection has become one of the important areas in BRI which is reflected in providing the necessary resources and environmental support for economic activities.

Since its inception, China has played a leading role of “Green Lead” from the perspective of the green industry.

In addition, it helped the BRI countries communicate better to build consensus to achieve the desired goals of ecological environment in these countries.

Fortunately, the environmental protection projects in BRI are not just engineering projects and facilities, but also involve themes of economy, policy, law, platform construction and other aspects.

in these participating countries and thus initiated noble concept of green BRI.

In addition to this, environmental protection policies and measures in BRI are mostly related to urban development.

The environmental protection measures are directly related to sites.The Lancang-Mekong environmental cooperation project is the prime example as it passes through six countries and is an important economic growth belt in Southeast Asia.

Along the Lancang-Mekong River, there are important cities such as Qamdo and Jinghong in China, Vientiane and Pakse in Laos, and Phnom Penh in Cambodia.

China initiated numerous measures like the top-level design of sustainable use of water resources, air and water pollution prevention, and the ecological health of the river basin can be guaranteed, which is crucial to the sustainable development of the city cluster.

The Yangtze River Delta Ecological and Green Development Strategy, the Bohai Rim urban agglomeration in China, the Baikal Basin City Cluster in Russia and so on are the prime examples of green BRI in these countries.

The BRI forwarded stricter requirements for the environment of node cities.Urban green space construction is an important way to promote green urbanization and enhance the urban environment.

In this connection, the “Park City” in Chengdu in China is one of the prime examples, which emphasizes the importance of “ecological value”, which is an ideal city construction model that takes urban green space system and park system, park-oriented urban and rural ecological pattern and scene as the basic and pre-configuration elements of urban and rural development.

China also proposed a new plan of afforestation and urban forest construction of one million mu (164736.9 acres) in 2018 which is on the rise.

Urbanization projects like industrial parks, eco-tourism areas, and new urban districts are the focus of cooperation among countries along the BRI.

Along BRI, the construction of ecological and green development demonstration zones can have a wider influence and may form urban construction templates for other cities.

Now China has launched the construction of the first green development demonstration zone, the China-Singapore Eco-City in Tianjin, which is 30 square kilometers in large, with a planned population of 350,000 inhabitants.

The eco-city is located in coastal saline-alkali land, and the planning requires that green buildings and clean energy use ratio reaches 100 percent.

The renewable energy utilization rate strives to reach 20 percent.Despite the problems of the sustainability of saline-alkali land reconstruction, this exploration path is worthy of recognition.

Moreover, Beijing Green Development Demonstration Area, the Leading demonstration zone of ecological civilization in Tianfu New District of Chengdu and so on all indicate the existence of green BRI.

“The construction of eco-city and green demonstration areas are also gradually being promoted in typical cities such as the China-Belarus Industrial Park of Belarus in Minsk, and in Gwadar too.

To conclude, China’s BRI has been described as the largest infrastructure project in history, affecting around 60pc of the global population.

Whilst promoting a narrative of connectivity, growth and “win-win partnerships”, the project has received opposing assessments regarding its wider impact, particularly in the environmental domain which has now been mitigated through announcing and implementing diversified but integrated green policies within the domain of BRI in all the participating countries around the globe.

Despite Western propaganda many regional as well as international research studies confirm that the BRI is recognised as instrumental in meeting global CO2 emission targets.

It followed the implementation of the concept of ecological civilization introduced in the Constitution of the Communist Party in 2012.

In the framework of “greening the BRI”, Chinese banks (NDB, AIIB, Silk Road Fund) involved in funding BRI projects have tried to include this concept in their investments, by creating their own befitting environmental policies.

Afterwards, Beijing has launched green financing initiatives to encourage both Chinese and international banks to finance the BRI.

In this regard, the Singapore branch of the Industrial and Commercial Bank of China issued the first green BRI Bond worth 2.2 billion US dollars during April 2019.

More recently, the COVID-19 pandemic has caused considerable financial distress for many BRI participant countries due to which Chinese banks and private companies have started a refinancing process to help these countries to achieve the desired goals of green BRI.