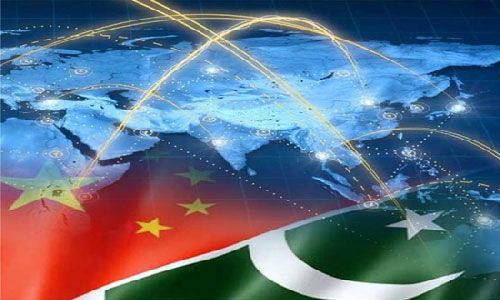 CHINA-Pakistan Economic Corridor (CPEC) and One Belt One Road Initiative (BRI) are in full swing to achieve desired goals of greater regional connectivity, immense socio-economic integration, green energy development, new job generation and last but not the least poverty elimination in all the member countries with no hidden economic agenda and any secretive political scheme.

Both are the vivid reflection of ancient Chinese philosophy and Xi Jinping doctrine of “shared prosperity” because by sharing the world would become “prosper” in the days to come.

There are lots of socio-economic, geopolitical and geostrategic partnerships (RECP, The Regional Comprehensive Economic Partnership), US & EU sponsored active and free ASEAN, and last but not the least, military cooperation (AUKUS, QUAD) all are giving new meanings to both the projects (CPEC & BRI) of  the century. Unfortunately, divergent forces representing positive and negative energy are now at eye-ball to eye-ball.

In this connection, wide-spreading of the new variant Omicron is going to become a new regional flashpoint and global means of further division, and confrontation.

Last but not the least, US further socio-economic sanctions against China, Iran and many other countries and its perpetual China’s containment policy are clearly indicating that the so-called “Empire” is falling and falling rapidly.

Thus socio-economic, geopolitical and geostrategic importance, relevance, significance, utility and simulation of CPEC and BRI are paramount which would hopefully create “strategic cushions” for regional as well as international economy during 2022 and beyond. CPEC phase-II is going to start in Pakistan very soon.

The Chinese President Xi Jinping has already pledged to “transform” the BRI into “green” which upholds the Chinese strong desire to protect the planet from looming threats of non-traditional climate change in the days to come.

In this regard, the annual speech of Chinese President Xi has once again shown China’s responsibility as a major country to pursue international peace and protect sustainable development, and its resolution and action to promote building a community with a shared future for mankind.

Thus the role of Chinese BRI is “vital” to achieve regional connectivity and global peace and development during 2022 and beyond.

Undoubtedly, President Xi’s speech inspired people around the world to love peace, to jointly protect peace, and to work together for common development and prosperity towards building a community with a shared future for mankind.

In this regard, the role of the BRI especially “green development” is obvious in 2022 and future too.

It seems that China will, in many ways, shape the course of humanity towards a more stable, peaceful and prosperous world in which its diversified but integrated policies and projects like CPEC and BRI would play an important role during 2022 and beyond.

Obviously, China made an important contribution to the world through its world-class performance in COVID-19 pandemic control and economic growth during 2022-2021.

During his keynote speech Chinese President Xi termed unity, solidarity and cooperation at regional as well as international level as essential “stimulating” actors to guide countries around the world to write a new chapter in building a community with a shared future for mankind.

In this context, BRI being the project of the century with unlimited socio-economic multiplier effects and “economic levellers” would be crucial during 2020 and in the years to come. China has declared a comprehensive victory in the battle against poverty, achieving an economic “miracle” in the modern world of eliminating absolute poverty which is not only a Chinese miracle but also a major contribution to the world’s poverty reduction project and global development.

In addition to this one of the main objectives of the BRI is “drastic reduction” of poverty in all the member countries. Thus BRI has direct “economic correlation” with the reduction of regional as well as global poverty reduction proposition in 2022 and beyond.

In the coming two decades, however, BRI countries’ GDP average growth rate is expected to be twice that of the OECD, and investments in BRI countries are likely to comprise more than half of total investment worldwide. Since its inception eight years ago, BRI cooperation has been expanding to wider areas and delivering more benefits.

In the first ten months of 2021 China’s trade in goods with BRI partner countries succeeded to stop the overall downward trend and increased by 23 percent. The China-Laos Railway has now been incorporated and running. China-Europe Railway Express witnessed accelerated growth in freight services and cargo volume.

Moreover, numerous flagship projects like the Piraeus Port, the Gwadar Port, and the Hungary-Serbia Railway are making steady progress. The eighth Ministerial Conference of the FOCAC and the third Ministerial Meeting of the China-CELAC Forum have stimulated and guided the high-quality BRI cooperation to make more solid progress in Africa and Latin America.

It is evident that BRI 145 countries and 32 international organizations, it has now become “a belt of prosperity” and “a road to happiness” benefiting people across the globe.

Despite US and the Western fake and false propaganda, China is committed to work with all BRI countries to uphold the principle of rigorous consultation, joint contribution and shared benefits, pursue open, green and clean cooperation by submerging the BRI with other countries’ development plans and initiatives.

It seems that with concerted efforts, the high-quality BRI cooperation will make new progress in 2022 and continue to yield fruitful outcomes in high standard, people-centered and sustainable development in all the member countries.

In this connection, Zhao Lijian, Chinese Foreign Ministry spokesperson, reaffirmed Chinese principled stance to promote a high quality construction of the BRI with all parties in 2022 and try to achieve fruitful results.

Zhao noted that the construction of BRI had marked a significant number of achievements since its official launch eight years ago, including several milestones in 2021.  He termed BRI future prospects very positive and productive in 2022 and beyond.

It is suggested that due to surfacing of a new variant of covid-19 (Omicron) more sincere efforts should be initiated to practically implement the program of “Extended BRI Health Partnership” among the BRI member countries as soon as possible.

This scribe suggests that formation of a “BRI Health Bank” should be formed at once to protect the BRI from this new variant so that the journey of socio-economic prosperity, greater regional connectivity and last but not the least dreams of qualitative life may not be compromised during 2022.

The Chinese government must disseminate basic core strength of the BRI being an open, green and clean principle in all the regional and international mass media in a bid to mitigate the propaganda of the West and to obtain more sustainable achievements with high construction standards among all the member countries during 2022.

To conclude, China has been the stabilizer of world economic growth and its mega project CPEC and BRI are streamlining different phases of socio-economic development in all the member countries because both do not have any preferential list of communities, countries and continents.