BRI - Kazakhstan the linchpin of China’s Belt and Road Initiative 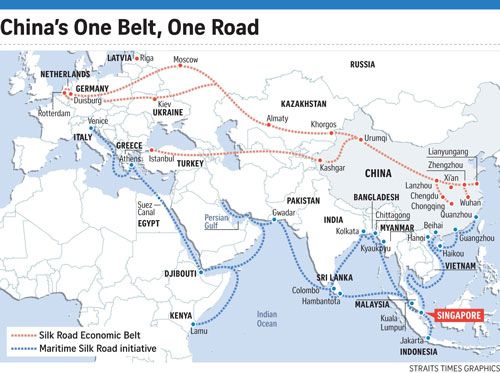 The Republic of Kazakhstan is the “birth place” of the One Belt One Road Initiative (BRI) thus it has strategic relevance to it. It was launched during Chinese President Xi Jinping’s September 2013 visit to Astana, highlighting Kazakhstan’s critical transit role in China’s pivot to the world and especially Europe.

Undoubtedly, BRI projects are spreading economic feel good gestures and sentiments in the Central Asia Region and look highly promising, in terms of increased connectivity, expanded regional trade and modernize their obsolete transport infrastructure. Thus BRI has been increasing their potential of trade and commerce, integration of socio-economic development and last but not the least eradication of poverty.

Right from the beginning, China considers the BRI as the way to deliver public goods, promote global connectivity and portray itself as a responsible stakeholder since its inception in 2013.

Unfortunately, Kazakhstan is now passing through difficult times because of foreign infiltration and external aggression as termed by its President, Kassym-Jomart Tokayev. Economic activities remain closed for a while. Industrial projects and production channels have been halted but speedy response of the national forces have now thrown out all the terrorists and criminals from these installations. At last sanity prevailed and propagated false and fake hybrid war against Kazakhstan has now been diminished.

Thank God! Kazakhstan has successfully eradicated all rogue elements and peace and stability has been largely restored. The government of Kazakhstan, being the sovereign guarantor to all FDIs & FPIs, has assured all multinational companies and foreign investors that their sponsored projects and investment are safe and secured. In this connection, the Chinese government has shown solidarity with Kazakhstan and pledged its constant support.

Kazakhstan is the largest landlocked country and the 9th in the world. It shares a border to the East with China. It borders Russia to North and Kyrgyzstan and Uzbekistan and Iran to the South. It has an ideal “geographical” location for connecting China and the West through important routes under the flagship of BRI. Today two of the six economic corridors of BRI pass through Kazakhstan connecting China with Europe, Iran and Western Asia. Mainly the New Eurasian Land Bridge and the China-Central Asia-West Asia Corridor pass through it.

In this context, BRI comprises 51 mega projects of US$35 billion in Kazakhstan, in which US$3.5 billion is invested in the International Centre for Border Cooperation Khorgos and a dry port on the eastern border with China. Its remarkable investment includes the Shalkar-Beyneu Railways, the Zhezkazgan-Suksanl Railways, the Kuryl Seaport, the Unified System of Management “NOMAD” and Almaty-Sha Railway Line, Almaty bypass railways etc. Thus Kazakhstan is the “jewel” of BRI in Central Asia and beyond.

Moreover, Kuryk Seaport has direct access to railway tracks which has already enhanced its “strategic” value. The port is well located at the intersection of the East-West and North-South trade corridors (Iran, India and Russia) creating one of the fastest multinational routes for cargo delivery. It is meant to perform multi tasks mainly to increase Kazakhstan’s trade activities with Caspian Sea Region (CSR) and transit potential of the Caspian Sea.

The Trans-Caspian International Transport Route (TITR), a 6500 kilometre long corridor, links Asia with Europe and passes through countries including Kazakhstan, Azerbaijan, Georgia and Turkey. It is meant to coordinate all transporters along with the route from Asia to Europe and vice versa.

Furthermore, the Khorogos International Centre for Border Cooperation has been one of the important projects of BRI which supports Kazakhstan’s state program of Nurly Zhol. It is indeed an entry point for Chinese goods shipped for Asia and Europe. Thus Kazakhstan has an important place in BRI which has already further enhanced its socio-economic ties, geopolitical affiliation and geostrategic orientation with China. It has actually further diversified its energy supplies.

Through its infrastructure investment and the construction of the world’s largest “dry port,” a railway depot and logistics centre meant to process Chinese rail traffic in the border town of Khorgos, Beijing pins the success of the BRI’s land routes on Kazakhstan’s cooperation.

The ongoing projects of BRI in Kazakhstan reflect its pursuit of “multi-vector” foreign policy, which seeks to develop a network of different political and economic relations with various countries.

It is home to the world’s 12th largest oil reserves, Kazakhstan presents an important opportunity for China to diversify its energy needs and lessen its dependence on oil tankers travelling through the Straits of Malacca. Indeed, resources from Kazakhstan’s extractive industries make up the majority of its exports.

Kazakhstan’s exports gas and crude petroleum to China which accounted for $2.35 billion in 2019, over a third of the value of the country’s total exports to China. Gas and oil pipelines physically connect China to Kazakhstan and Central Asia more broadly and supply China with a stable source of energy. The country’s abundant mineral and oil wealth and its proximity to China make it an important source of natural resources to help fuel China’s economic growth.

BRI is among the world’s most ambitious infrastructure projects ever conceived. It is a union of development and investment initiatives that would stretch from East Asia to Europe.

Initially, it was two-pronged: the overland Silk Road Economic Belt, and the Maritime Silk Road. On land, Beijing aims to connect the country’s hinterland to Europe through Central Asia; the maritime component will build ports and railways to connect the fast growing Southeast Asian region to China’s southern provinces.

It is feared that prolonged unrest in Kazakhstan could also derail advancing bilateral ties and deepening BRI cooperation between both sides, including the long-discussed China-Kazakhstan permanent comprehensive strategic partnership.

To conclude, the BRI, however, is not only an initiative; it is a response to former US President Barack Obama’s ‘pivot to Asia’; and to the growing salience of the Indo-Pacific maritime geography as well. Unfortunately, the Indo-Pacific Region has become central to the security and foreign policies of world countries like the US, Japan, Australia, India, the UK, France, Germany and the countries of ASEAN. A series of security pacts namely QOUD and AUKUS have further deteriorated regional security.

It seems that China is now working to strengthen global economic links to its western regions, which historically have been neglected. Promoting economic development in the western regions is seen as a priority. So is securing long-term energy supplies from Central Asia and the Middle East role of Kazakhstan is paramount.

The Republic of Kazakhstan is linchpin and both countries should work jointly to eradicate all irritants of socio-economic prosperity in the days to come.