Sandwiched between China and India, Nepal wants to avoid being caught up in geopolitical power games. The country's leadership is again proposing the Cold War-era idea of formalizing its policy of nonalignment. 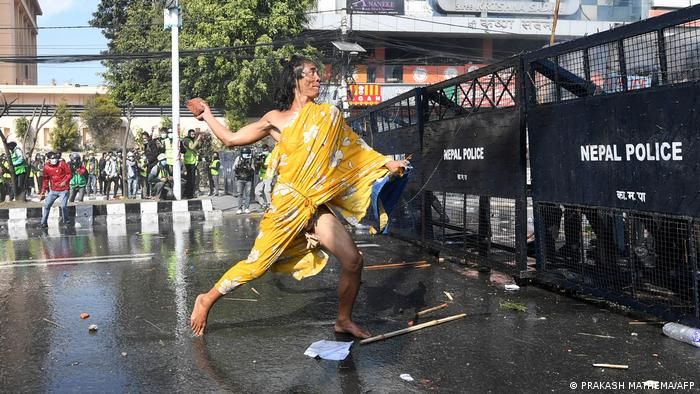 Politicians in Nepal are renewing proposals that the Himalayan nation be declared a "zone of peace" (ZoP) to maintain neutrality amid growing geopolitical tension in South Asia.
The idea for declaring Nepal a ZoP was first floated in 1975 by King Birendra of Nepal during the height of the Cold War.
The declaration was intended to secure Nepal's development as sovereign and independent.
Now, the Communist Party (Maoist Center) has reintroduced the idea, which has received widespread support from the left since party leader Ram Karki brought it up in June.
Sandwiched between China and India, Nepal upholds a nonaligned foreign policy, and avoids becoming part of any strategic alliances.
Karki told DW that the ZoP is critical for maintaining Nepal's neutrality and protecting its national interests amid heated competition between China and the United States in Asia.
"Nepali society is being polarized in favor of one power or another," he said. "Powerful nations are coming to Nepal with proposals to assert their influence," he added.
"We can engage them through the diplomacy of peace, with which we can cooperate with everyone on economic objectives while avoiding any strategic or military alliances," he said.
Nepal balances between the US and China
Although Nepal tries to maintain diplomatic neutrality, it does take a position on global issues, such as voting in favor of the UN resolution condemning Russia's invasion of Ukraine. Nepali nationals are also allowed to be recruited into the armed forces of India and the UK.
Despite India's dominant influence in Nepal, China has made inroads by proposing trans-Himalayan connectivity projects through the Belt and Road Initiative (BRI).
Nepal has also increased engagement with the US, accepting a $500 million (€489 million) Millennium Challenge Corporation (MCC) grant in February 2022.
The MCC funds are aimed at building and upgrading Nepal's road and electricity networks. Accepting the US grant unleashed protest from Nepal's hardliner left-wing parties. China accused the US of carrying out "coercive diplomacy."
Many Nepalese China watchers believe Beijing sees Nepal's increased engagement with Washington as a security threat to the Tibetan Autonomous Region.
In June, the Nepalese government decided to withdraw from joining the US State Partnership Program (SPP), a mechanism set up to enhance cooperation between the US National Guard and partner nation militaries.
US Assistant Secretary of State for South and Central Asia Donald Lu said Kathmandu dropped out of the SPP following pressure from Beijing. China has denied this.
Can the ZoP make a difference?
Maoist party leader Karki said that Nepal's existing policy of non-alignment is not being reflected in practice, as China, the US and India vie for influence in South Asia.
"If we want to remain sovereign, we have to be clear about our destiny and that's to become a zone of peace," he said.
Congress Party politician and former Nepali Foreign Minister Prakash Sharan Mahat, however, said that declaring Nepal as a zone of peace would be superficial,  as the nation's existing policy of non-alignment should already be front and center when dealing with foreign powers.
"There is no need to add any adjective in our existing policy of neutrality and non-alignment," he told DW.
CD Bhatta, a Kathmandu-based geopolitical analyst, questioned the very logic behind reviving an old idea to address the foreign policy challenges of the 21st century.
"The existing policy of so-called non-alignment and neutrality may not be effective to address new and emerging geopolitics," he told DW. "But reviving a failed strategy won't help address them," he added.
When the ZoP idea was first proposed in the 1970s, it was supported by more than 116 countries, including China and the US. However, it floundered due to opposition from India.
Dinesh Prasad Bhattarai, former permanent representative of Nepal to the UN, said India at the time claimed the ZoP plan contradicted the Nepal-India Peace and Friendship Treaty of 1950. According to him, Russia also withdrew its initial support after pressure from India.
"The idea of ZoP is still pertinent for small countries like Nepal due to its location and unfolding geopolitics in South Asia," he told DW.
"However, it can't be realized without support from neighbors, mainly India … There are no fundamental changes in India's view towards it," he added.