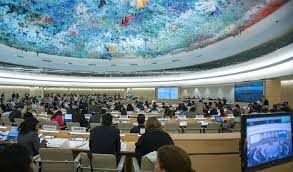 Ironically, the Commissioner of the OHCHR issued this report exactly some minutes before the completion of her tenure in the office which clearly showed her ill-intention, immense political colouring and the long hidden hands of the US and its lobbyists.

The said report is empty from any substantial circumstantial evidence and merely full of assumptions, presumptions, subjectivity and numerous farce, false, fake and fictional propaganda.

On its part, China strongly rejected the said report and urged that its issuance has already been objected to and opposed by nearly a hundred countries thus it is not the mainstream view of the international community.

Moreover, the Chinese Foreign Ministry spokesperson Wang Wenbin termed it purely “plotted” by the US, its allies and some other anti-China forces in the West.

Wenbin labelled it totally “illegal” and “invalid”. He highlighted its “flaws” and “fallacies” and called it a “hodgepodge” of misinformation, a political tool used by the West to push its strategy of using Xinjiang to contain China.

Interestingly, more than 60 countries along with 100 non-governmental organizations jointly submitted a letter to the OHCHR to make it clear that they opposed the release of this false report.

He further elaborated that nearly 100 countries, including Muslim countries, have continuously spoken up at the Human Rights Council and the Third Committee of the UN General Assembly to support China’s legitimate position on Xinjiang and oppose interference in China’s internal affairs under the pretext of Xinjiang-related issues.

He upheld that the West’s unpopular political attempts on Xinjiang would be doomed to fail. He termed it the “lie of the century”.

Critical analysis of this report clearly indicates that the OHCHR has seriously “violated” its own inbuilt SOPs and professional norms of impartiality, accountability, fair-play and scientific inquiry.

It also miserably breached its own domain, scope and golden principles of universality, objectivity, non-selectivity and non-politicization.

Thus it is full of “dark shadows” of its inbuilt prejudice, bigotry and hatred towards China, its people and developing countries.

It is also full of “self-defined” and “poorly conceived” shallows of egoistic orientations. It seems that the OHCHR has become “accomplice spokesperson” of the US government and the West at large to punish the fast developing countries.

It is indeed an “illegal”, “incredible”, “inaccurate” and “un-factual” report which tried to pollute the Chinese ancient philosophy of “service to humanity”, “protection of basic human rights”, “peaceful persuasion of multiculturalism”, “provision of ethnic diversity” and people’s friendly policies towards weaker factions of the society.

Furthermore, Xinjiang is the home of numerous ethnic groups living and working jointly and having tremendous “interfaith harmony”, “tolerance” and full of positivity, productivity and participatory orientations.

There is not a single place in Xinjiang which is a “prohibited” or “No Go Area”. Despite the US and the West propaganda and fabricated fairy tales of human discrimination and genocide, Xinjiang has been the centre of human wisdom, social cohesion, economic development, stability, sustainability due to which it succeeded to achieve immense economic development in this region.

There is no so-called “ghost human” sterilization centre because health facilities and social accommodation are everywhere, easily available and free of any cost.

In this connection, independent statistical data reconfirms that economic prosperity is getting “immense momentum” which vividly reflects that there is no “witch-hunt” of any planned or the government sponsored mechanism of so-called economic marginalization.

Same may also be replicate on so-called human sterilization because population of the Muslim minority is on the increase thus the said report is the “total sum” of fabricated facts which has nothing to do with ground realities of Xinjiang.

There is no so-called genocide and cultural extermination of the indigenous population in Xinjiang region because every community and living ethnic entity is absolutely “free to act”, “celebrate feast, rituals and hold religious ceremonies/festivals.

To conclude, China has been rated as a “peaceful champion of ethnic diversity”, “soil of rich multiculturalism” and “pioneer of humanity” for the last 5000 years.

Now China has become a “driving force” in the global economy and an essential “stimulating force” for the post COVID-19 economic recovery.

It has positive role in the global governance too. In this connection, China does not have any incident of so-called human rights violations, systematic racial discrimination against minorities, gun violence causing civilian deaths and injuries, torture and abuse in illegal jails overseas, overseas military operations and indiscriminate killing of civilians.

Sorry to say, the history of the US is full of shameful deeds against native Indians, economic marginalization against blacks and discriminative system bars against Afros & Asians.

Moreover, the modern US is the facsimile of Roman Empire’s inhuman philosophy of so-called “White-Man Supremacy”.

Denial of basic political, economic and cultural rights through killings, displacements and forced assimilation has become unfortunately “New Normal” in the US due to which it has further inflicted with severer polarization.

The UN Human Rights Office report is full of smears and slanders and intentionally interferes in China’s internal affairs.

It is based on presumption of guilt and relies on disinformation and lies fabricated by anti-China forces as its main sources.

It intentionally misrepresents China’s laws and policies necessary to fight against terrorism and extremism in Xinjiang.

It completely ignores the marvellous human rights achievements of the numerous ethnic communities in Xinjiang.