Yemeni separatists have taken effective control of the port city of Aden after days of fighting with troops loyal to the internationally-backed government. 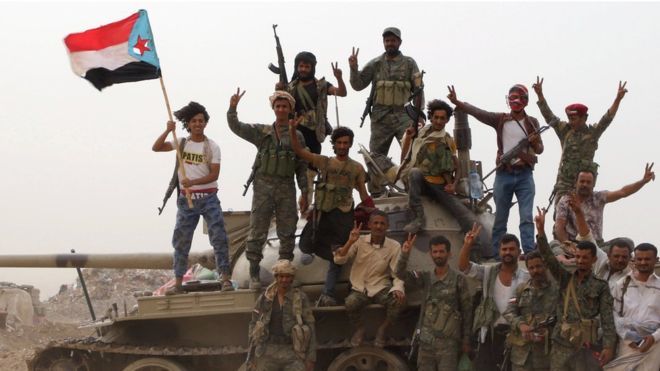 Forces aligned with the UAE-backed Southern Transitional Council (STC) - which wants an independent south - said they had seized control of military camps and the presidential palace.

The opposing Saudi-led coalition said it had responded with military action.

The government itself characterised the STC's seizure of Aden as a "coup".

Coalition forces had called on the STC to withdraw from their positions in Aden or face further action. It said it launched its strike against a "threat" to the country's government.

With the STC in control of Aden on Saturday, both sides agreed to a ceasefire but its status is unclear following the coalition action.

The southern port city of Aden has been the temporary base of President Abdrabbuh Mansour Hadi's government. The president himself is based in the Saudi capital Riyadh.

An official with the separatist Security Belt militia told AFP that it seized the presidential palace on Saturday without a fight.

"Two hundred soldiers from the Presidential Guard were given safe passage out of the palace," the official said.

An eyewitness confirmed to the news agency that the complex had been handed over.

"It is all over, the [Southern Transitional Council] forces are in control of all the military camps," an official in Mr Hadi's government told Reuters news agency.

The foreign ministry described the takeover as "a coup against institutions of the internationally recognised government".

The UAE, which has armed and trained thousands of southern separatist fighters, earlier called for calm and a renewed focus on battling the Iran-backed Houthis, who took over the capital Sanaa in 2014.

Doctors Without Borders on Saturday described Aden as "a battlefield" and said its hospital there was "stretched to the limit". It said it treated 119 patients in less than 24 hours amid the fighting.

The civil war in Yemen has devastated the country, killing thousands of civilians and causing shortages of food and medical care that have affected millions.