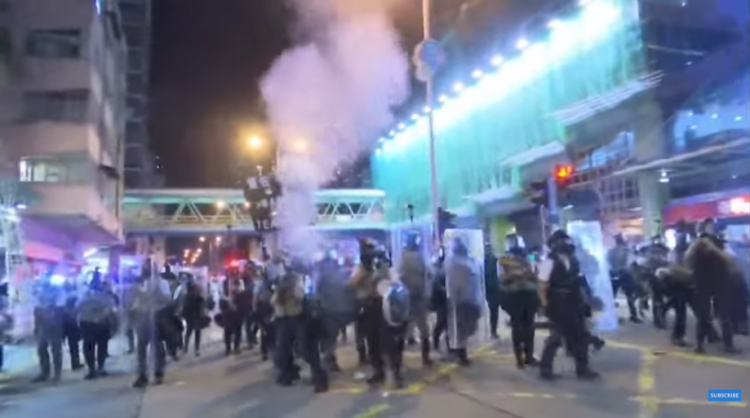 Police and protesters in Hong Kong are engaged in another standoff in a residential district of the city.
Authorities have fired tear gas at the protesters gathered in front of a police station in the area of Sham Shui Po in Kowloon.
Reuters photographers and television journalists at the scene saw police shoot several rounds of tear gas with little warning at demonstrators who had been shining laser beams at the police station and burning joss papers on the roadside.
The new bout of clashes comes hours after protesters were banned from entering the airport following the cancellation of hundreds of flights in and out of the coastal city over the past two days.
Protesters had flooded the terminal on Monday for a pacific sit-in, erecting make-shift barriers with luggage trolleys to prevent travellers from reaching departure gates, but the standoff with police had become increasingly violent.
Some protesters beat up two men they accused of being a spy for Beijing and an undercover police officer respectively, according to NBC News correspondent Matt Bradley, who was on the ground.
The former British territory has been rocked by demonstrations for the past 10 weeks over a proposed extradition bill that would have allowed suspected criminals to be transferred to mainland China which protesters say would further weaken the city's judicial independence.
The escalation of violence has been condemned by the authorities, NGOs, foreign governments and the UN High Commission for Human Rights.
The latter said in a statement on Wednesday that it "has reviewed credible evidence of law enforcement officials employing less-lethal weapons in ways that are prohibited by international norms and standards."
Beijing, which had so far, remained fairly silent, said on Tuesday and Wednesday that the protest movement had reached "near terrorism." The language and the deployment of military personnel close to the border with Hong Kong — allegedly for a drill — has raised fears China could intervene in the conflict.
Euronews