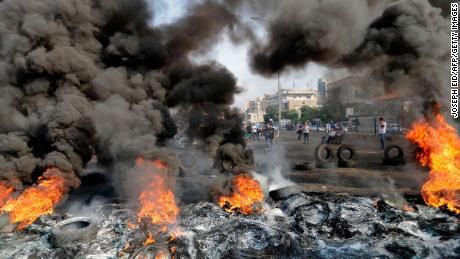 Plumes of smoke billowed over the Lebanese capital Beirut as nation-wide economic protests entered a second day and protesters burned barricades on the country's main roads.

Demonstrations engulfed various parts of Lebanon on Friday. Many protesters called for the resignation of the government and demanded the "downfall" of a political class that has ruled the country since the start of its 15-year civil war in 1975. Demonstrators also took aim at the political alliance between President Michel Aoun and Shia armed group Hezbollah.

Prime Minister Saad Hariri is expected to address the nation on Friday afternoon.

Many of the main routes in the Lebanese capital were closed by blazing barricades, with the sidewalks strewn with trash as protesters filled the streets. Roads leading to the airport were closed for a second time on Friday.

The unrest began on Thursday night, hours after the government announced new austerity measures, including a tax on WhatsApp calls that was later rescinded.

'We tried to be well behaved. None of it worked'

"The country needs to be paralyzed," said protester Hady Omar who lit up one of the barricades that closed a road leading to central Beirut from the south. "We tried to protest peacefully. We tried to be well behaved. None of it worked.

"Either we all live peacefully, or no one does," said Omar.

Protester Msheimish Msheimesh was carrying his six-month-old daughter outside government headquarters on Friday when he leaned over an army barrier to speak to a soldier. "I told him we need the military to take over," Msheimish, 37, told CNN.

"I'm tired. I can't make ends meet," he said. "And I brought my daughter here so she can witness this and hopefully we can tell her about it someday."

Several other protesters called for a military takeover to remove a political ruling class that many view as incompetent and corrupt. Others have called for a technocratic government to be installed.

"We've come down to the streets to say enough. We're disgusted. We're tired of this. We need something new," said Haneen Murad, 30, who was part of the demonstrations in downtown Beirut.

"We have no electricity, no water. We're even less than a third-world country," protester Ali Saraeb said. "It's time for everyone to go down to the streets."