2750 tonnes of ammonium nitrate stored at Beirut warehouse at centre of explosion
Read: 990

Azerbaijani MoD - Armenians created a fake Twitter account using the name of the Ministry of Defense of Azerbaijan
Read: 675

Kashmir Bleeds - Conflict can trigger another war between India and Pakistan
Read: 657 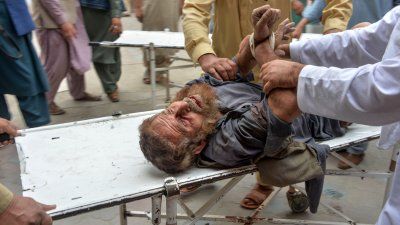 The death toll from an Afghanistan mosque bombing rose to 73 people Saturday as the village of some 70 families buried its dead.
The bombing Friday devastated Jawdara village in eastern Afghanistan, leaving the equivalent of a man from each family dead. The village was already struggling after Islamic State militants cut the water supply earlier this year.
Funerals were held Saturday with hundreds in attendance.
The Times reported that the blast occurred when a suicide bomber came into the mosque Friday during the men's prayer.
"The village is ruined," said local religious leader Mawlawi Sadaqat, who led prayers during burials. "Each house is left with orphans."
The women of the village dug bodies from the rubble with help from people from neighboring areas in Nangarhar province.
The village's only doctor, Mohammed Aref, along with some of his family members, and two teachers, were among the victims. Twenty-three of the 73 victims were teenagers or younger.
The blast also injured at least 36 people as worshipers gathered for Friday prayers, officials said.
More than 100 people had been worshiping at the time of the blast, villagers of the surrounding Haskamena district said.
Villager Gulab Shinwari said he saw "a heartbreaking scene" when he got to the blast site.
The Taliban has denied responsibility for the attack, with Taliban spokesman Zabihullah Mujahid, condemning it as a serious crime.
U.N. Secretary-General Antonio Guterres "strongly" condemned the attack, with his office spokesman saying there must be accountability.
On Thursday, the United Nations stressed the need to do more to address civilian casualties, which are at record-high, according to the U.N. Assistance Mission in Afghanistan's third-quarter figures.