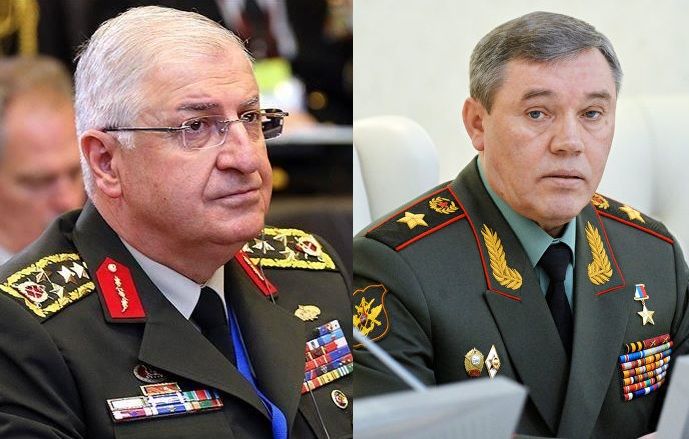 Turkish and Russian military chiefs had a phone call to discuss latest development in northern Syria, the Turkish army said on Friday, Eurasia Diary reports citing Anadolu Agency.
Turkey’s Chief of General Staff Gen. Yasar Guler and his Russian counterpart Gen. Valery Gerasimov also exchanged views on daily developments in Syria, the Turkish Armed Forces said on Twitter.
The phone conversation came ahead of the first joint ground patrol of Turkey and Russia in northern Syria.
On Oct. 22, Turkey and Russia reached a deal under which YPG/PKK terrorists would pull back 30 kilometers (18.6 miles) south of Turkey’s border with northern Syria within 150 hours and security forces from Turkey and Russia would conduct joint patrols there. The 150-hour period ended on Tuesday.
The deal came after Turkey launched anti-terror Operation Peace Spring on Oct. 9 to eliminate terrorists from northern Syria east of the Euphrates River in order to secure Turkey’s borders, aid in the safe return of Syrian refugees, and ensure Syria’s territorial integrity.
In its more than 30-year terror campaign against Turkey, the PKK has been responsible for the deaths of 40,000 people, including women, children, and infants. The YPG/PYD is the Syrian offshoot of PKK. [Anadolu Agency]