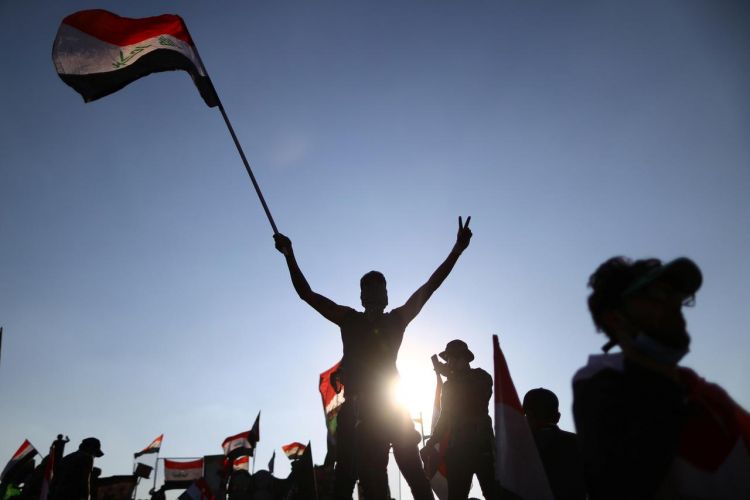 Iraqi security forces clashed with anti-government protesters in the early hours of Saturday near Baghdad's Tahrir Square, leaving one demonstrator dead and dozens more wounded, Eurasia Diary reports citing al aswat.
The capital's overnight violence was centered on two bridges linking Tahrir to the western bank of the Tigris, where most government buildings and foreign embassies are located.
Riot police deployed along the bridges fired tear gas to keep back protesters, who have dug in to their positions with their own barricade.
The protests have evolved since October 1 from rage over corruption, poor state of public services and unemployment into a full condemnation of the ruling class.
Protesters have occupied Tahrir square for more than a week, apparently unimpressed by the government's proposals, including of early elections and a new premier.
Also Saturday, thousands of protesters were blocking all roads leading to Iraq's main Gulf port Umm Qasr, after security forces used live rounds and tear gas on them overnight, security sources said.
Operations at the port have been at a complete standstill since Wednesday, after protesters first blocked its entrance on Tuesday.
Umm Qasr receives the vast bulk of Iraq's imports of grain, vegetable oils and sugar, needed to feed a country heavily dependent on imported food.
Since October 1, more than 250 people have been killed and thousands more wounded in the rallies across Iraq.
The latest official toll was provided on Wednesday, but medical and security sources said at least eight demonstrators have been killed since.
Seven of them died around Tahrir in Baghdad, where clashes between riot police and security forces have escalated.
The eighth victim was killed by the security guards of a local politician in the southern city of Nasiriyah.