Police blamed the attack on rebels fighting Indian rule, without providing any proof in this regard. 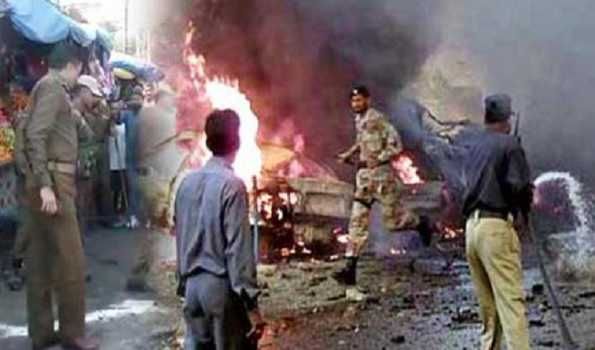 At least one person was killed and 25 others were injured on Monday after an attacker threw a grenade at a busy market in India-administered Kashmir's main city, police and medics said.
Eurasia Diary reports citing TRT World that the slain was identified as a street vendor from India's Uttar Pradesh state. Police blamed the attack on rebels fighting Indian rule, but provided no proof in this regard.
"The attack, targeting roadside vendors, was carried out to discourage people from returning to normal life," Haseeb Mughal, a police official, said.
Earlier last week, New Delhi formally implemented legislation approved by Parliament in early August that removes India-administered Kashmir's historical semi-autonomous status and begins direct federal rule of the disputed area amid a harsh security lockdown and widespread public disenchantment.
The legislation divides the disputed Muslim-majority region two federally governed territories.
The August decision, by Hindu nationalist-led government of Prime Minister Narendra Modi, was accompanied by a harsh crackdown.
New Delhi sent tens of thousands of additional troops to the already heavily-militarised region, imposing a sweeping curfew, arresting thousands and cutting virtually all communications.
It also saw the arrest of pro-independence as well as pro-India activists before the changes were imposed in the disputed region.
The most visible ones are the absence of Kashmir's own flag and constitution, which were eliminated as part of the region's new status.
But the most contentious change for many people is the threat of a demographic change in India's only Muslim-majority region and of land grabs by Indians outside the region with the formal abrogation of a clause in the Indian Constitution that safeguarded Kashmiris' exclusive right to land ownership.
Authorities have since eased restrictions, lifting roadblocks and restoring landlines and some cellphone services.
They have encouraged students to return to school and businesses to reopen. But Kashmiris have largely stayed home, in defiance or fear amid threats of violence.
As the crackdown continues, Kashmiris have quietly refused to resume their normal lives, confounding India at their own economic expense.
For now, businesses in Kashmir are still largely shut. Many markets are only open for a few hours each morning.
The medics at the main hospital in Srinagar said they received 25 wounded.
Two doctors said two of the injured were brought to the hospital in critical condition with head injuries and were being operated on. The doctors spoke on condition of anonymity in keeping with government policy.
The attack also comes a week after at least 20 people were wounded when suspected militants lobbed a grenade at a bus stop in northwestern Sopore town.
In recent weeks, at least 10 non-local labourers and truck drivers have been killed by gunmen in separate incidents. Police have blamed militants for the killings.
Kashmir is divided between India and Pakistan but claimed by both in its entirety. The two countries have fought two wars over control of the region.
India accuses Pakistan of arming and training rebels who have been fighting for Kashmir's independence or its merger with Pakistan since 1989.
Islamabad rejects India's charge and says it only provides moral and diplomatic support. Most Kashmiris resent the Indian troop presence and support the rebels.