A Nuclear Nightmare - How a War Between Russia and Israel Could Start | Eurasia Diary - ednews.net

The potential for war is real. 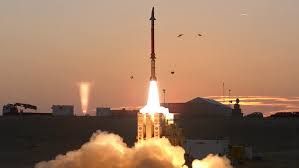