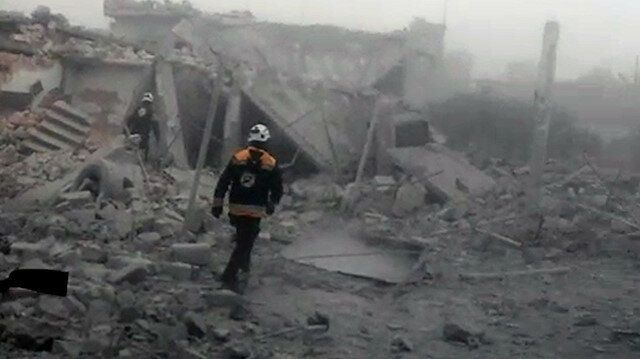 The offensive by the Assad regime’s army and Iran-backed foreign terrorist groups is continuing in southern Idlib.

The regime forces had surrounded the district.

Located in southeast Idlib, Saraqib is known as the "gateway" to the province.

In 2017, Turkey, Russia and Iran held meetings in Astana city in Kazakhstan and announced that Idlib and neighboring cities in the Eastern Ghouta region outside the capital Damascus and the southern cities of Daraa and Quneitra would be de-escalation zones.

But the Assad regime and Iranian-backed terrorist groups launched attacks in violation of the agreements and thanks to Russian air support gained control of these territories with the exception of Idlib city.

In September 2018, Turkey and Russia agreed to turn Idlib into a de-escalation zone where acts of aggression are expressly prohibited.

The Syrian regime and its allies, however, have consistently broken the terms of the ceasefire, including a fresh ceasefire on Jan. 12, launching frequent attacks inside the zone and killing at least 1,300 civilians since the agreement.