'We have no secret' - Putin reveals he informed Medvedev about government resignation
Read: 315 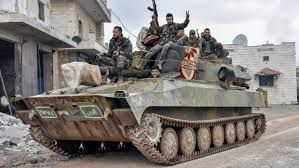 Syrian government forces have recaptured more than 600 square kilometers of territory so far in a campaign to seize control of the last rebel strongholds of Idlib and the Aleppo countryside, a statement from Syria's armed forces said on Sunday, Eurasia Diary reports citing Al-Arabiya.

Syria's armed forces have taken control of dozens of towns and villages in recent days as part of the campaign, the statement said.

The Syrian regime has been bombarding the area around the strategic city of Saraqib, Idlib, which is the intersection of two major highways.

Turkey and Russia have both been drawn into the conflict as the Russian-backed regime killed eight Turkish soldiers in the area, prompting a war of words between the two sides. Turkey, which supports opposition groups in Idlib, mans several observation posts.