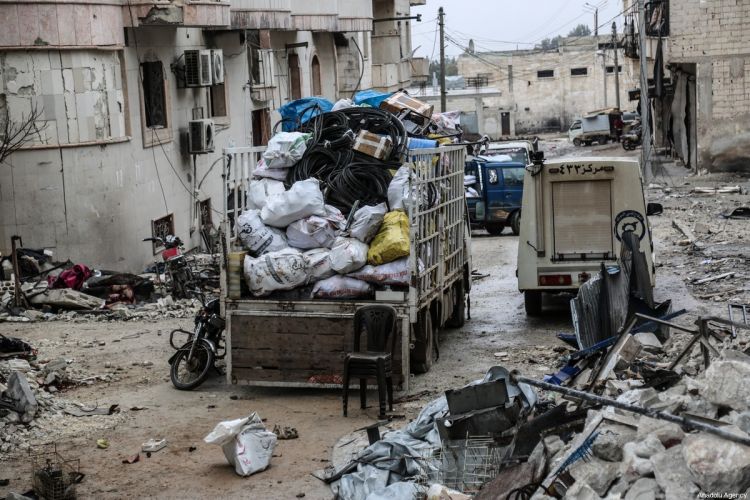 Militias loyal to the Syrian regime of President Bashar Al-Assad have been filmed desecrating the graves and exhuming the bodies of opposition fighters and those affiliated with them, in a series of clips circulated on social media over the weekend.

In one video, the Assadist fighters – reportedly from the infamous Shabiha militias which have fought for the regime since before the Syrian civil war – were seen hitting and destroying the gravestone of a senior opposition figure named Muhanna Ammar Al-Din or “Abu Mujahid”, before starting to dig into the grave.

Another video showed the entire graveyard and its contents destroyed, with the graves completely dug up and the bodies exhumed. The graveyard is located in the town of Khan Al-Sabil in southern Idlib, by the strategic M5 highway which the regime and its militias recently captured. Another video shows the regime fighters going even further by holding skulls of opposition fighters and civilians and mocking them.

One of the main regime militants who appeared in the graveyard video can also be seen in other videos three days earlier where he was being driven past the graveyard while calling the inhabitants “impure” and promising to return to settle his account “with the dead before the living.” He was then seen a day before the destruction in a video filmed inside a ruined and abandoned mosque in Idlib, in which he shouted slogans in support of Assad from the mosque’s pulpit, accompanied by other regime fighters.

In response to the videos and the Assad regime militants’ destruction of the graveyards – which were nominally Sunni Muslim graves – opposition forces released a video showing a Sunni evolutionary fighter at a Shia graveyard in the town of Al-Foua and Kafriya saying: “We can destroy your graves and dig them up, but this is not from our morals, nor from our customs and from our religion.”

The regime’s destruction of the graves, seen as an act that does not release even the dead from the Syrian civil war, comes amid the ongoing bombardment of the country’s north-western Idlib province which is the last major opposition stronghold.

He province was declared a de-escalation and safe zone after an agreement was struck between Turkey and Russia in September 2018, however that was violated by both the Syrian regime and its ally, Russia, when they launched the campaign to recapture the area in April last year.

With much of the country having been returned to regime hands, and consequently many of the citizens again being subject to its suppression and torture, Idlib has long been in Al-Assad’s sight. Throughout much of last year, however, the regime made little progress in retaking it from the opposition until Russian ground troops and Iranian forces became involved, helping Al-Assad advance into much of the province and capture many cities and areas. Since the beginning of Al-Assad’s campaign, there have been numerous ceasefires set up which were all broken primarily by the Syrian regime and Russia.