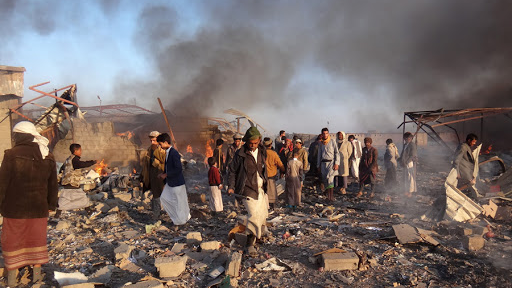 As countries across the world are fighting the coronavirus pandemic, Yemen's warring factions are still focusing on their military activities rather than preparing for a possible outbreak. The United Nations special envoy for Yemen on Friday called on the Yemeni rival parties to forgo war and join efforts to combat the coronavirus pandemic, EDNews.net reports citing CGTN.

"I urge the parties to forgo war and division and build on points of convergence. I call on them to join efforts to respond to the COVID-19 outbreak and turn the tide for the sake of the people of Yemen," Martin Griffiths said in a statement on Friday.

The Yemeni government army on May 8 repelled an attack by the Houthi rebels in the central province of Marib. The Houthi attack on the positions of the government forces took place in the eastern part of Sirwah district in the west of Marib. The fighting lasted hours, leaving dozens from both sides dead and injured, Xinhua news agency reported.

Yemen has been mired in a civil war since late 2014, when the Iran-backed Houthi group seized control of much of the country's north and forced the internationally-recognized government of President Abd-Rabbu Mansour Hadi out of the capital Sanaa.

The five years of civil war has destroyed more than half of the country's health system. Some health professionals lacking personal protective equipment refused to work and several local hospitals have been closed.

Meanwhile, the government Health Ministry on Friday recorded 12 new cases of COVID-19 in southern provinces, bringing the total confirmed cases to 205, including 33 deaths.

The government authorities have taken several measures to contain the outbreak of COVID-19, including imposing a partial overnight curfew in Aden and other main cities.

There are only 500 ventilators across the whole country, and only four labs having the capability to test the virus, according to Save the Children, a humanitarian aid organization for children.