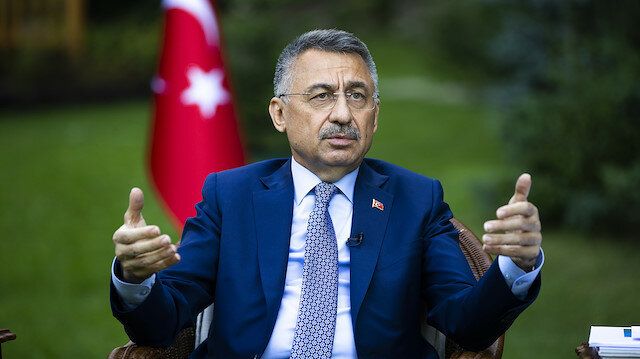 It will be beneficial for Greece, the Greek Cypriot administration and the whole region if the Greek president sincerely adopts the discourse of peace and reconciliation instead of war, the Turkish vice president said on Tuesday, Yeni Safak reports.

Fuat Oktay said the Greek president's accusation against Turkey is a “funny and futile propaganda effort, and also a provocation.”

He said if Greek and Greek Cypriot administrations see the truth and intend to hold talks on the two-sovereign-state solution in Cyprus Island, Turkey will support the initiative.

In 1974, following a coup aimed at Cyprus' annexation by Greece, Ankara had to intervene as a guarantor power. In 1983, the Turkish Republic of Northern Cyprus (TRNC) was founded.

For many decades, talks were held to resolve the dispute, all of which ended in failure. The latest, held with the participation of the guarantor countries, ended in 2017 in Switzerland.

In 2004, the plan of then-UN Secretary-General Kofi Annan for a solution was accepted by the Turkish Cypriots but rejected by the Greek Cypriots in referendums held on both sides of the island.

More recently, Greece has disputed Turkey's current energy exploration activities in the Eastern Mediterranean, trying to box in Turkish maritime territory based on small islands near the Turkish coast.

Turkey, the country with the longest coastline in the Mediterranean, has sent out drill ships to explore for energy on its continental shelf, citing that Ankara and the TRNC have rights in the region.

Dialogue about fairly sharing resources will be a win-win for all sides, say Turkish officials.

In a recent report, UN Secretary General Antonio Guterres said that "new ideas" may be needed for settling the issue of the island.