Armenian volunteer said that the Armenian authority was using them | Eurasia Diary - ednews.net

Armenian volunteer said that the Armenian authority was using them 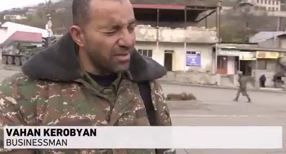 Armenian volunteer (businessman) Vahan Kerobyan, told Al Jazeera, they were used by the Armenian leadership.
This was reported by Eurasia Diary, citing Al Jazeera.
There was such strong propaganda that the soldiers were convinced that their army was superior to the Azerbaijani Army.
"We were told tales that we were strong, we thought our army was very strong, very large, we could do what we wanted, but in fact, no one in society knew the real situation. We deserve this result. "