Apophis meteor will gently pass by Earth tonight - experts warn it could collide with our planet in future
Read: 6753

US state capitals on alert for possible pro-Trump protests 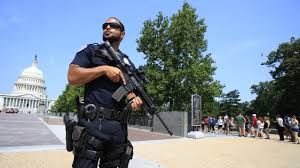 Ten days after rioters stormed the US Capitol in a deadly attack that stunned the world, cities nationwide were girding for a potential new wave of violent protests over the weekend, erecting barriers and deploying thousands of National Guard troops.

Michigan, Virginia, Wisconsin, Pennsylvania and Washington were among more than a dozen states that activated their National Guards to strengthen security. Meanwhile, downtown Washington, DC, was virtually empty, with streets near the Capitol closed and battalions of camouflaged National Guard soldiers taking up positions across the city center, Reuters reported.

The Democratic leaders of four US congressional committees said on Saturday they had opened a review of the events and had written to the FBI and other intelligence and security agencies asking what was known about threats, whether the information was shared and whether foreign influence played any role.

There were scattered demonstrations on Saturday, but statehouses remained mostly quiet. Law enforcement officials have trained much of their focus on Sunday, when the anti-government “boogaloo” movement made plans weeks ago to hold rallies in all 50 states.

In Michigan, a fence was erected around the Capitol in Lansing, and troopers were mobilized from across the state to bolster security. The legislature canceled meetings next week, citing concern over credible threats.