Lavrov: “Issue of mandate of Russian peacekeepers in Nagorno-Karabakh is being resolved” | Eurasia Diary - ednews.net

Apophis meteor will gently pass by Earth tonight - experts warn it could collide with our planet in future
Read: 6747

Lavrov: “Issue of mandate of Russian peacekeepers in Nagorno-Karabakh is being resolved” 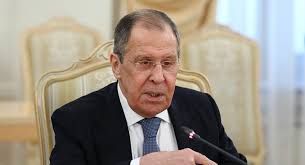 “Issue of the mandate of Russian peacekeepers in Nagorno-Karabakh is being resolved,” said Russian Foreign Minister Sergei Lavrov at the press conference on the finals of 2020, Eurasia Diary reports citing APA.

According to him, this issue should be the subject of a trilateral agreement of Russia, Azerbaijan, and Armenia.

“This was noted at a meeting on January 11 in Moscow. I would like to note that there is a secret paragraph neither on the November 9 trilateral statement nor on the January 11 agreement,” Russian FM emphasized.