We are returning homeland ! - A survey is being conducted on the return to Karabakh ! | Eurasia Diary - ednews.net

We are returning homeland ! - A survey is being conducted on the return to Karabakh ! 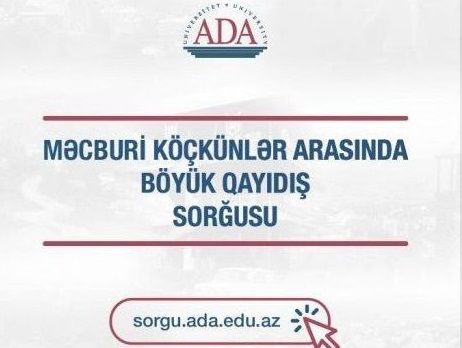 An online survey on the return of IDPs has been launched.

According to the information given by ADA University to EDNews.net, in the autumn of 2020, under the Supreme Command of the President of the Republic of Azerbaijan Ilham Aliyev, our National Army liberated the occupied territories of our country for about 30 years, and reconstruction and comprehensive development of these areas is one of the main tasks.

The central means of the process of rehabilitation and reconstruction is the return of IDPs to their homes. It is important to predict the repatriation potential as accurately as possible in order to organise the return effectively, and to study the wishes, intentions and suggestions of IDPs.

For this purpose, the "Working Group on Academic and Educational Affairs" of the Interdepartmental Centre under the "Coordination Headquarters for the centralized settlement of issues in the liberated territories of the Republic of Azerbaijan" established by the order of the President, conducts systematic research with the involvement of local and foreign experts. One of these studies is the "Preparation of proposals for the forecasting and effective organisation of repatriation to post-conflict areas of Azerbaijan" conducted at ADA University.

Several sociological surveys will be conducted as part of this study. The first one of them is an online survey. This survey is conducted on the basis of a state order by scientists, working as an independent group and consisting of specialists from several research and educational institutions. The confidentiality of the personal data of the respondents and their answers is fully guaranteed.

The survey is open from February 22, i.e it is now possible to answer the survey questions. It takes only 5-6 minutes to complete the questionnaire. To participate in the survey, it is enough for IDPs to enter https://sorgu.ada.edu.az/.

The Research Group urges IDPs to take an active part in the survey and answer questions honestly. We must take into account that this survey, as well as other similar studies, are to take into account the views and suggestions of our compatriots who will return to Karabakh. We are responsible for our own future!

We are returning to our homeland! Control your own destiny!