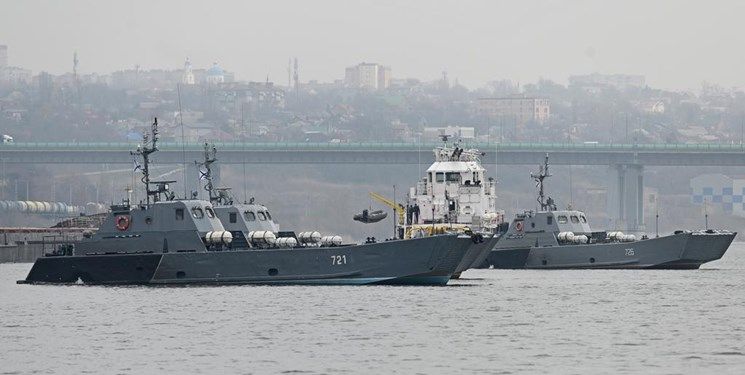 Two Russian warships are on their way to the Black Sea in line with Moscow’s military buildup along the border with Ukraine.
The Ropucha-class landing ships, capable of carrying tanks and delivering armor and troops, transited the Bosphorus on Saturday.
Two other landing ships are expected to transit the strait, too.
Already, 15 smaller vessels have completed a transfer to the sea – part of an exercise, according to the RIA Novosti.
Russia temporarily restricts the movement of foreign warships and what the Kremlin terms ‘other state ships’ near the Crimean Peninsula.
And tensions have been on the rise in and over the Russian-speaking Donbass region of Ukraine, where Ukrainian troops and pro-Russia forces have been fighting since 2014, when the then Ukrainian territory of Crimea voted in a referendum to join Russia.
Kiev and its Western allies believe the reunification amounts to annexation of the territory. They accuse Moscow of having a hand in the crisis. Russia denies the allegation.
Last month, Ukrainian President Volodymyr Zelensky issued a decree to “recover” Crimea.
Kiev and Moscow have since traded blame for a spike in violence in Donbass.
In support of Ukraine to hedge against the "Russian threat", the United States has deployed warships and fighter jets near the border with Russia.
The Kremlin refutes the claim of "threatening Ukraine".
Holding the West responsible for the current crisis, Moscow says what it does is for its own security, and not intended to threaten anyone.
On Friday, Russia said its MIG-31 fighter intercepted a US RC-135 strategic spy plane over the Pacific Ocean. The American aircraft was approaching Russia’s territorial waters.
Under an agreement reached in February 2015, Kiev committed to granting two self-declared republics in Donbass broad autonomy in exchange for a formal return to Ukrainian jurisdiction.
The accords led to an uneasy ceasefire between Kiev and the Eastern territories, but Ukraine has refused to grant the said autonomy.
Andrei Kortunov, head of the Russian International Affairs Council, has warned about recent reinforcements in Eastern Ukraine, saying Russia's actions were to avert any move to retake areas controlled by forces backed by Moscow.