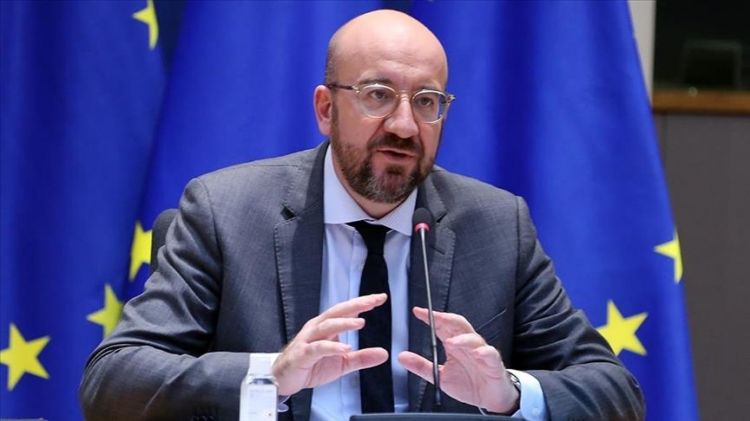 Russia illegally annexed Crimea, the president of the European Council said Tuesday in response to the increased presence of Russian troops on the Ukrainian border.
Charles Michel met Georgian President Salome Zourabichvili at the Orbeliani Palace in the nation's capital, Tbilisi, following the signing of an agreement that is considered a means of reform in terms of elections and justice, consolidating the rule of law by the ruling party and some opposition parties.
"Your achievement yesterday [of signing the agreement] is all the more important, given the difficult regional situation," said Michel, addressing the parties. "The EU is deeply concerned about Russia's growing military buildup on Ukraine's borders and in illegally annexed Crimea."
"The risk of a further escalation is evident. The EU has called on Russia to defuse tensions," he added.
Noting that the European Union's commitment to Georgia's sovereignty and territorial integrity is as strong as ever, Michel said "the EU has reconfirmed our five principles for engagement with Russia, and support to the Eastern partners is a key pillar."
Regarding Zourabichvili's intention to strengthen Georgia's integration with the EU during a security conference to be held in Batumi this year, Michel said "I welcome the idea to convene a meeting with the leaders of Georgia, Ukraine and Moldova to reconfirm our special commitment to the associated partners."
Underlining that the signing of the agreement does not mean the absolute solution to the ongoing political crisis in the country, Michel said "more hard work starts today. The agreement presents a robust foundation for reforms. Election reform, justice reform and consolidating the rule of law remain key priorities in EU-Georgia relations."
"The agreement is not a finish line. It is a starting point for your work towards consolidating Georgia's democracy and implementing reforms. This agreement will ensure that electoral and judicial processes follow the highest standards," he continued.
He expressed his appreciation of the power-sharing in the Georgian parliament.
"This is the basis for ensuring vibrant and meaningful functioning of the parliament. It is also the only way to make reforms inclusive and viable."
Zourabichvili thanked Michel for his support in resolving the political crisis in her country during the press conference and expressed Georgia's wish to achieve closer cooperation with the EU.
Stating that political dialogue was difficult, Michel said full respect for its democratic values and effective functioning of institutions were a must for democracy.
Thanking the party leaders "for their courage to look for compromise," he said "I know how much commitment, work and vision this has required. And I know this was not easy. Now the challenge is yours as well to make this work. The people expect you to deliver."
"The political crisis is over. The constructive political engagement needs to be sustained," he said.
Political tension in Georgia
The crisis between the ruling party and opposition in Georgia which had been ongoing since the general elections on Oct. 31, 2020 was exacerbated by the arrest of Nika Melia, the head of the main opposition United National Movement Party, on Feb. 23.
In the general elections, most of the opposition parties that crossed the election threshold did not enter parliament, objecting to the election results. The opposition continued protests despite the government's call and demanded early elections.
Government officials, however, called on the opposition to enter parliament, stating that the elections were held in a very transparent and democratic way and there was no need for new elections.
Content of EC-led agreement
The agreement signed between some of the political parties in Georgia is based on the approval of a bill for the release of persons referred by the opposition as political prisoners and those arrested during protests against the Russian delegation in Tbilisi on June 19, 2019, through amnesty or other means.
It also involves the condition of early general elections in 2022 in case Georgian Dream, the ruling party, receives less than 43% of the votes in this year's local elections.
In addition, the next parliamentary elections will be held with a 2% threshold with a fully proportional system and the opposition will participate with more representatives in the election commissions, according to the agreement.
It envisages making judicial reforms with parliament's contributions as well as the electing the head of parliamentary committees from among the opposition.
The agreement caused discord among the opposition Monday. The main opposition party as well as leading opposition parties were hesitant to sign the agreement due to the ongoing political crisis in the country.