Without the support of NATO, the UK cannot give a serious response to Russian strike - Expert
Read: 194

'Israeli security forces must exercise maximum restraint and calibrate their use of force,' says Antonio Guterres 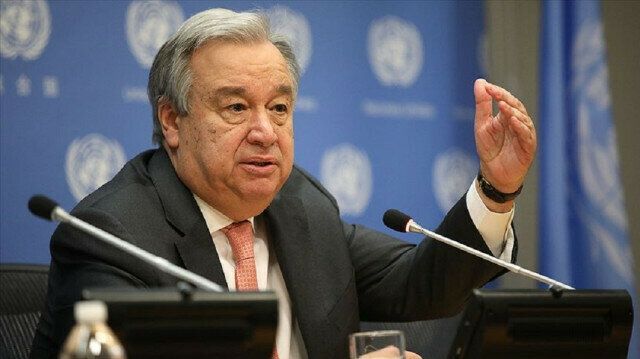 The "spiraling escalation" in Israel and Palestine must be brought to a rapid end, UN Secretary-General Antonio Guterres said on Tuesday.
Gutterres "is deeply saddened to learn of increasingly large numbers of casualties, including children, from Israeli airstrikes in Gaza, and of Israeli fatalities from rockets launched from Gaza," spokesman Stephane Dujarric said in a statement.
"Israeli security forces must exercise maximum restraint and calibrate their use of force. The indiscriminate launching of rockets and mortars towards Israeli population centres is unacceptable," added Dujarric.
During the Muslim holy month of Ramadan, Israeli authorities have harassed and attacked worshippers in the midst of prayers inside Al-Aqsa Mosque, the third holiest in Islam, and have threatened to evict dozens of Palestinian families from their homes in the Sheikh Jarrah neighborhood of occupied East Jerusalem.
Tension spread from East Jerusalem to the Gaza Strip after Palestinian groups in Gaza vowed to retaliate for the raids on Al-Aqsa, and potential resident removals in Sheikh Jarrah.
As of late Tuesday, Israeli attacks on Gaza have killed 28 Palestinians, including nine children, and injured 152 others. Two Israelis have been killed in rocket attacks.