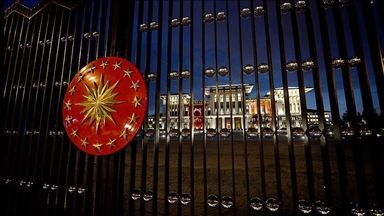 Turkey’s president and Libya’s prime minister discussed Israel's attacks on Jerusalem, Al-Aqsa Mosque, Gaza and Palestinians by phone early Friday.
According to a statement by Turkey's Communications Directorate, Recep Tayyip Erdogan and Abdul Hamid Dbeibeh also touched on bilateral relations and regional developments during the call.
Libya’s new unity government headed by Prime Minister Dbeibeh was sworn-in in March this year.
Israel's ongoing offensive on Gaza has left 103 dead, including 27 children and 11 women, according to the Palestinian Health Ministry. Another 580 people have been injured.
Seven Israelis have been killed in the recent violence -- six in rocket attacks, in addition to a soldier who was killed when an anti-tank guided missile struck his jeep.
Tensions have been running high in the Sheikh Jarrah neighborhood in occupied East Jerusalem over the past month as Israeli settlers have repeatedly clashed with residents following a court order for the eviction of Palestinian families in the area. The Israeli Supreme Court later delayed a hearing on the matter on an appeal.
Palestinians protesting in solidarity with residents of Sheikh Jarrah have also been targeted by Israeli forces and settler groups.
Israel occupied East Jerusalem during the 1967 Arab-Israeli war and annexed the entire city in 1980 in a move that has never been recognized by the international community.