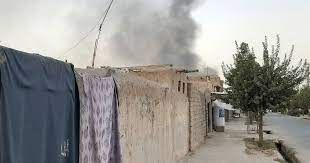 Afghanistan’s government has expressed concern over the brutal attacks by the Taliban movement (outlawed in Russia) on cities which have led to war crimes, human rights violations and a humanitarian catastrophe in the country, a statement by the Afghan Foreign Ministry published on its official website on Thursday said. "The Government of the Islamic Republic of Afghanistan has raised with the international community the grave concerns of the Government and people of Afghanistan over the Taliban's brutal attacks on cities, which have led to war crimes and blatant human rights violations and humanitarian catastrophe in Afghanistan," the statement noted.

"The Afghan negotiating team headed by the Chairman of the High Council for National Reconciliation Dr. Abdullah, attended on Wednesday the Extended Troika meeting with the participation of Russia, the US, China, and Pakistan in Doha, expressly echoing the Afghan people and government’s demands. The chairman of the High Council for Reconciliation called on the international community, especially the Troika meeting member states, to adopt serious measures to prevent Taliban attacks on cities, which have led to war crimes, widespread human rights abuses and humanitarian catastrophe. Mr. Abdullah also stressed the need to start meaningful and sincere negotiations to establish an immediate ceasefire and reach a political agreement," the Foreign Ministry said.
The Foreign Ministry urged the international community and the Troika on the peaceful settlement in Afghanistan (Russia, the US, China) to undertake effective measures against the Taliban. Kabul stressed that the militants’ actions are not just leading to the humanitarian catastrophe and a civil war "but also exacerbate violent extremism and incite terrorists in the region posing a serious and irreparable threat to the collective security of the region and the world." "Therefore, stopping the Taliban violence and crimes in direct collusion with regional and international terrorists will be not only in the interest of Afghanistan but in the interest of the whole world, especially the countries of the region," the Foreign Ministry concluded.
Situation in Afghanistan
The latest meeting on the peaceful settlement in Afghanistan took place a day before in Doha. Participants discussed the prospects of the peaceful settlement against the background of the aggravated situation in Afghanistan caused by the clashes of government forces and the Taliban movement. The Kabul delegation was led by Abdullah Abdullah. The special representatives of Russia, the US, China and Pakistan took part in the meeting.
Afghanistan’s security situation deteriorated significantly in April after US President Joe Biden announced that the American armed forces’ operation there which became the US’ longest foreign military campaign was coming to an end. Against this background, the Taliban has been stepping up the pace of its offensive in several directions. According to the data from several open sources as well as the claims of the Taliban itself, the radicals are controlling from 60% to 85% of the country’s territory, including the areas along the border with five countries: Iran, China, Pakistan, Tajikistan, and Turkmenistan.
On February 14, 2003, the Russian Supreme Court declared the Taliban to be a terrorist organization. The extremist organization’s activities are outlawed nationwide.