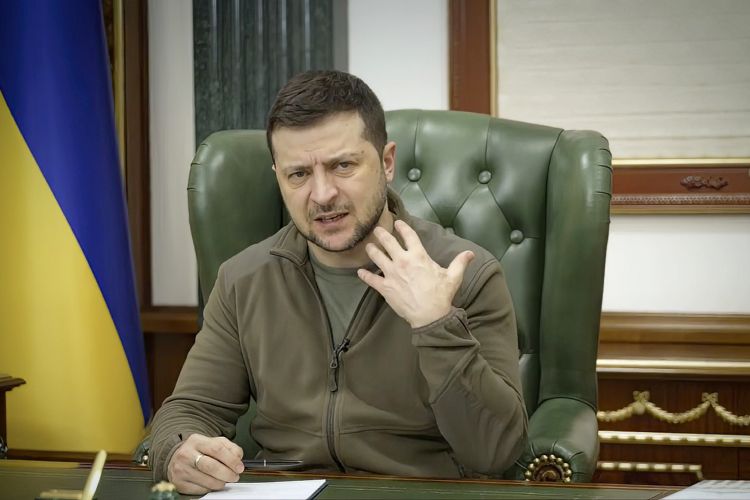 Ukraine is entering a "new stage of terror" as the Russian military edges closer to a direct push for control of the nation's capital, Ukrainian President Volodymyr Zelenskyy said Saturday.
His comments came after Ivan Fedorov, the mayor of the southern city of Melitopol, was taken into custody by Russians, reports The Wall Street Journal reported Saturday.
Zelenskyy in a video said the mayor had kept a Ukrainian flag on display in his office and would not cooperate with troops that were occupying the city. According to an advisor with Ukraine's Interior Ministry, they took him away after putting a plastic bag over his head.
"They did not find collaborators who wanted to hand over the city and the power to invaders," Zelenskyy said. "Therefore they had to switch to a new stage of terror when they are trying to physically eliminate representatives of the legitimate local authorities."
Cruise missiles hit an airport south of Kyiv and Russian strikes hit suburbs to the east and west of the capital city on Saturday. Further, a drone was shot down and landed in the center of Kyiv, with a bank catching on fire.
Ukrainian forces have been able to hold off Russian military attempting to enter Kyiv and have been attacking Russia's supply lines with weaponry from the United States. Ukraine's allies have also played a big role in the defense.
U.S. Vice President Kamala Harris said new weapons are being delivered every day, and on Saturday, President Joe Biden signed off on $200 million in new security assistance.
Russian deputy foreign minister Sergei Ryabkov said Saturday that Moscow considers arms deliveries as legitimate targets and has warned about the "consequences" of the "thoughtless transfer of weapons, such as portable air-defense systems and antitank systems, into Ukraine could have."
He further commented on state TV that the United States is the "source of maximum tension.”
Russian President Vladimir Putin on Saturday did not show interest in reaching a settlement for a ceasefire with Ukraine during a call with German Chancellor Olaf Scholz and French President Emmanuel Macron, but instead claimed that Ukrainian soldiers and national groups were committing violations of human rights laws and demanded that they persuade Kyiv to stop its "criminal activities."
Zelenskyy at a news conference in Kyiv said Russia may be able to seize large areas in his country, but they will not be able to hold them.
Meanwhile, Ukraine officials said their country's forces killed Russian Maj. Gen. Andrey Kolesnikov, of Russia’s 29th Army. The death marks the third general of his rank to die since the invasion started in late February.
Moscow has not commented on the deaths of the generals, but Western officials confirmed the deaths.