This city has no future, says Natalya Terpegoryeva, resident of Volnovakha 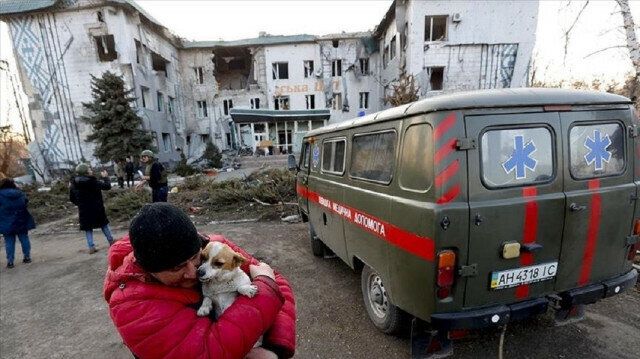 The Russia-Ukraine war turned a city in eastern Ukraine into a ghost town.
Volnovakha, one of the 18 regions of Donetsk, has been under the control of the Russian Armed Forces and the pro-Russian separatist administration in Donetsk since March 11.
The city of 21,000 people came to the brink of a humanitarian crisis four days after the war erupted. By the first week of the war, 90 % of the buildings in the city were damaged.
Almost all of the houses in Volnovakha are abandoned as the bombs destroyed the infrastructure and roads.
- ‘We had a nightmare here’
Natalya Terpegoryeva, one of the residents who survived the clashes, told Anadolu Agency about her experiences during the war.
Stating that they had terrible moments during the conflicts, Terpegoryeva said, "A nightmare started here on Feb. 25-26. The city was engulfed in flames. It is very difficult to describe what we went through."
Explaining that the people are trying to survive in the basements of the houses, Terpegoryeva said she wants to leave the city with her son and this city has no future.
The Russia-Ukraine war, which started on Feb.24, has met international outrage with the EU, US and UK, among others, implementing tough financial sanctions on Moscow.
At least 1,119 civilians have been killed in Ukraine and 1,790 injured, according to UN estimates, while cautioning that the true figure is likely far higher.
More than 3.82 million Ukrainians have also fled to neighboring countries, with millions more displaced inside the country, according to the UN refugee agency.