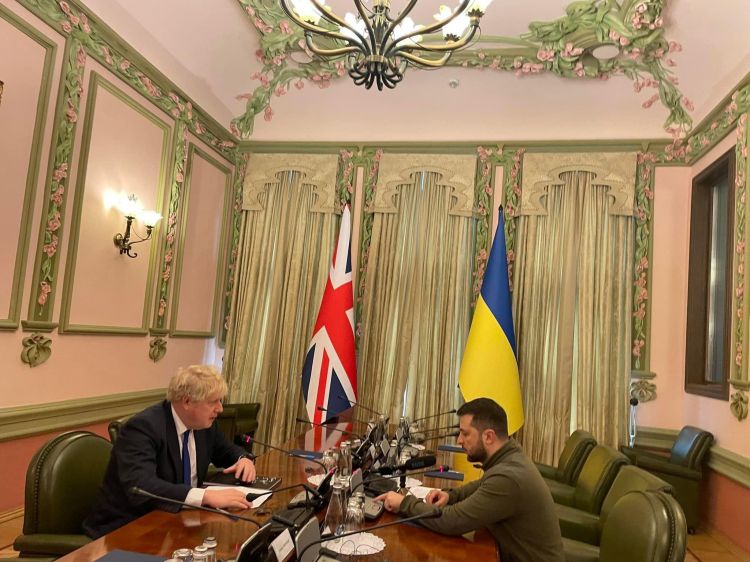 How leading the country into its seventh week of war with Russia, Ukrainian President Volodymyr Zelenskyy hosted British Prime Minister Boris Johnson in Kyiv on Saturday.
Johnson’s trip to the capital, barely a week removed from a Russian siege that left parts of the city’s outskirts and nearby towns in ruin, is easily the highest-profile visit of a NATO leader to Ukraine since Russia’s invasion began on February 24. The trip comes as Russian troops continue attacks in eastern Ukraine after repositioning from offensives in the north.
To get caught up on the war as it stands today, The War Zone readers can find our previous situation report here.
A remarkable video showing Johnson and Zelensky walking around Kyiv while surrounded by armed guards has been published. This is fairly stunning from a security aspect, with huge lines of sight being seen in the video:
Posted at time of original publication:
The Ukrainian Embassy in the United Kingdom first tweeted a photo of the two leaders on Saturday morning. The BBC reported the trip was not only a “show of solidarity with the Ukrainian people” but also to discuss continued British economic and military support for Ukraine.
The visit also came only a day after the British government announced a new package of military aid to Ukraine, including NLAW and Javelin anti-tank systems, loitering munitions, and Starstreak air defense systems.
Downing Street later announced the leaders agreed on some 120 armored vehicles and an unspecified anti-ship missile system for the Ukrainian armed forces. While the armored vehicles are believed to be six-wheeled Mastiffs, the question remains what type of anti-ship missile Ukraine will receive.
Johnson’s visit further underscores the situation around Kyiv. While Polish, Czech, and Slovenian leaders previously traveled to the besieged capital by train on March 15, the British prime minister is another matter.
Simply put, Johnson and his team represent a nuclear-armed NATO country on Ukrainian soil, and a Russian attack on them while in Kyiv or in transit, even accidentally in the course of other operations, poses serious risks for escalation. This trip only happens if the British and NATO calculated the risk of Russian attacks as low, or are otherwise feeling particularly brave about heading into a warzone on a diplomatic consult. It is unclear at this time what assurances the United Kingdom had, if any, that helped offset the risks of this very high-profile diplomatic operation.
Staying with the British, here are the latest assessments from the British Ministry of Defense on the war. It largely matches open-source reporting that Russian forces now appear focused on the Donbas and possibly securing a land corridor to Crimea, though continued resistance in Mariupol and elsewhere are hampering those efforts.
It also made note of the deadly Russian Tochka-U missile strike on the Kramatorsk railway station that reportedly killed more than 50 people trying to leave the region.
Video showed Russian troops atop armored vehicles, largely V-marked BMD airborne infantry fighting vehicles and some T-80U tanks with accompanying trucks, on the road near Izyum. The town, recently occupied by Russian forces, is a likely lynchpin for a Russian attempt to encircle Ukrainian forces in the Donbas.
Clear blue skies in eastern Ukraine made smoke trails from missile launches visible for miles, as seen near Donetsk as well as further north on the Belgorod-Kharkiv frontline. It’s not clear whether these are ballistic missiles like the Tochka-U or Iskander, long-range rocket artillery, or air defenses opening fire.